For people with pre-existing liver disease, toxic algae may be more dangerous 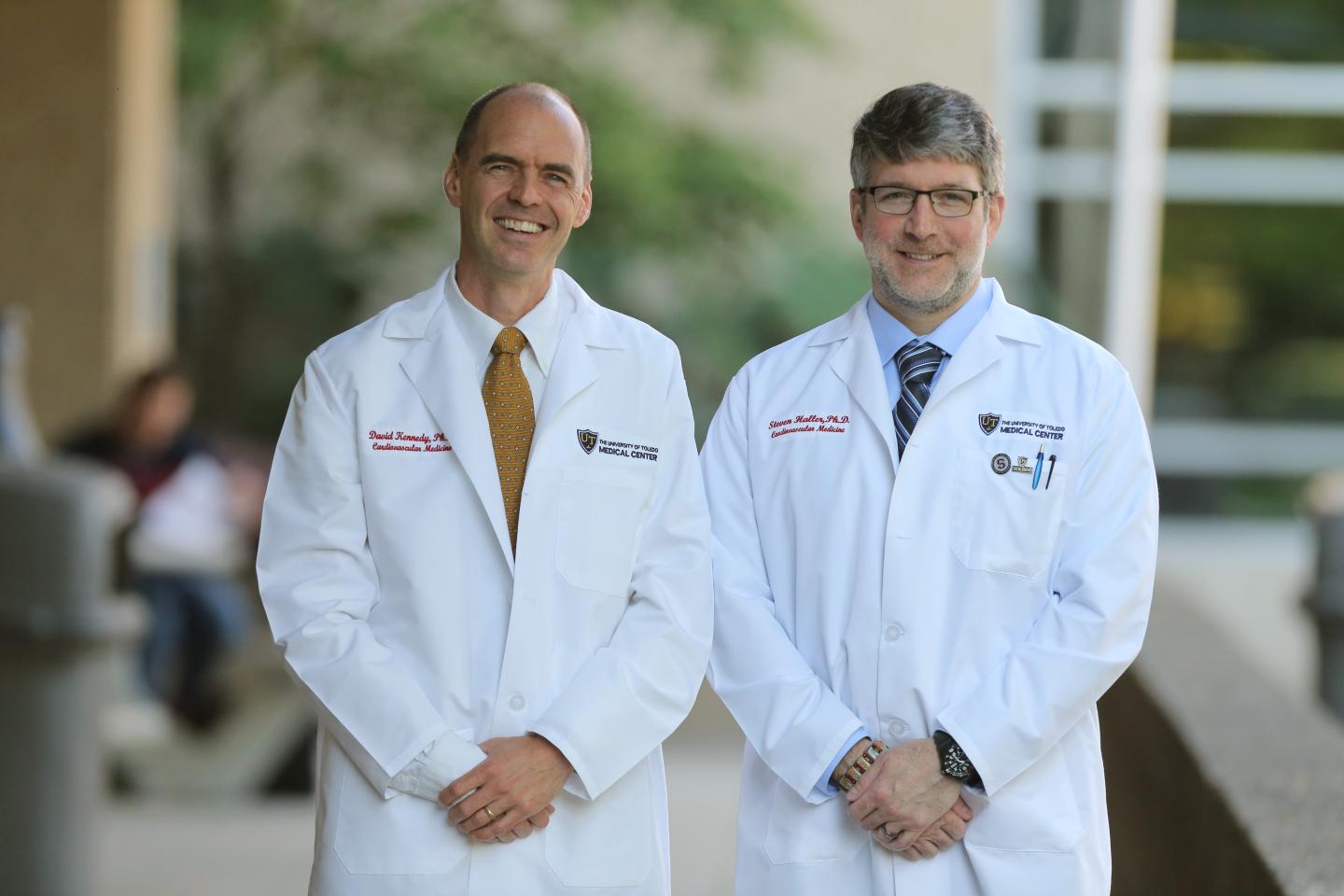 IMAGE: Dr. David Kennedy (left) and Dr. Steven Haller recently published research that found microcystin, a toxin produced by blue-green algae, may be more dangerous than previously known for those...

Toxins produced during harmful algal blooms may be more harmful to people than previously known.

Researchers at The University of Toledo College of Medicine and Life Sciences sought out to examine how microcystin might affect individuals with non-alcoholic fatty liver disease, a widespread condition that is frequently asymptomatic. They found the toxin can significantly amplify the disease at levels below what would harm a healthy liver.

The study, published last month in the journal Toxins, follows earlier research from UToledo that found clear evidence that microcystin exposure worsens the severity of pre-existing colitis. Microcystin is a by-product of the cyanobacteria found in what is commonly known as blue-green algae.

"The take home message from our research is there are certain groups of people who need to pay extra attention and may be more susceptible to microcystin toxins. We may need to explore special preventative guidelines for those people in terms of how much microcystin they are exposed to through drinking water or other means," said Dr. David Kennedy, an assistant professor of medicine at UToledo and one of the study's lead authors.

Aided by nutrient runoff and warming waters, seasonal blooms of blue-green algae are flourishing across much of the United States. Not all algal blooms produce toxins, but many do.

Potentially dangerous concentrations of microcystin have been found this year in ponds in New York City's Central Park, along the Mississippi Gulf Coast, reservoirs in California, and a portion of Lake Erie's coastline near Toledo.

With annual blooms becoming more frequent and intense, researchers in the UToledo College of Medicine and Life Sciences wanted to better understand how the toxins might affect people already suffering from conditions that affect organ systems microcystin is known to attack, such as the liver.

"It's a gray area in terms of what microcystin is really doing to you if you have a pre-existing disease state. Are you more susceptible? Are we going to have to go back and revaluate what we consider safe in a person with a pre-existing disease state? It's important we start providing answers to these questions," said Dr. Steven Haller, UToledo assistant professor of medicine.

"Current exposure limits from the World Health Organization and the U.S. Environmental Protection Agency for humans are based off studies done in healthy animals," Haller said. "The results of this study suggest there may be a need to review those guidelines for people with pre-existing conditions."

They also noted major differences in how microcystin was processed handled by the kidneys in the two test groups.

The differences seen in how microcystin was processed between the two test groups suggests that kidney function may play an important role in the increased susceptibility of the mice with pre-existing liver disease.

"This may be highly relevant to help us understand the deaths that occurred in kidney dialysis patients, and point to the need to pay particular attention to at-risk patient populations as we design preventative, diagnostic and therapeutic strategies," Kennedy said.

The results from the liver study build on prior work from Kennedy and Haller looking at how microcystin exposure might affect individuals with inflammatory bowel disease, another common condition that impacts an estimated 1 million Americans.

In that study, published in June, the researchers demonstrated that exposure to MC-LR prolongs and worsens the severity of pre-existing colitis, contributing to significant weight loss, bleeding, and higher numbers of signaling molecules that cause inflammation.

"Based on this data we're coming up with insights into how we can potentially treat exposures if they do occur," Kennedy said. "This is giving us a number of insights into how we might help patients, especially patients who are vulnerable or susceptible if there was an exposure."