When a woman experiences a stressful event early in pregnancy, the risk of her child developing autism spectrum disorders or schizophrenia increases. Yet how maternal stress is transmitted to the brain of the developing fetus, leading to these problems in neurodevelopment, is poorly understood.

New findings by University of Pennsylvania School of Veterinary Medicine scientists suggest that an enzyme found in the placenta is likely playing an important role. This enzyme, O-linked-N-acetylglucosamine transferase, or OGT, translates maternal stress into a reprogramming signal for the brain before birth.

"By manipulating this one gene, we were able to recapitulate many aspects of early prenatal stress," said Tracy L. Bale, senior author on the paper and a professor in the Department of Animal Biology at Penn Vet. "OGT seems to be serving a role as the 'canary in the coal mine,' offering a readout of mom's stress to change the baby's developing brain."

Bale also holds an appointment in the Department of Psychiatry in Penn's Perelman School of Medicine. Her co-author is postdoctoral researcher Christopher L. Howerton. The paper was published online in PNAS this week.

"People think that the placenta only serves to promote blood flow between a mom and her baby, but that's really not all it's doing," Bale said. "It's a very dynamic endocrine tissue and it's sex-specific, and we've shown that tampering with it can dramatically affect a baby's developing brain."

To elucidate how reduced levels of OGT might be transmitting signals through the placenta to a fetus, Bale and Howerton bred mice that partially or fully lacked OGT in the placenta. They then compared these transgenic mice to animals that had been subjected to mild stressors during early gestation, such as predator odor, unfamiliar objects or unusual noises, during the first week of their pregnancies.

The researchers performed a genome-wide search for genes that were affected by the altered levels of OGT and were also affected by exposure to early prenatal stress using a specific activational histone mark and found a broad swath of common gene expression patterns.

They chose to focus on one particular differentially regulated gene called Hsd17b3, which encodes an enzyme that converts androstenedione, a steroid hormone, to testosterone. The researchers found this gene to be particularly interesting in part because neurodevelopmental disorders such as autism and schizophrenia have strong gender biases, where they either predominantly affect males or present earlier in males. 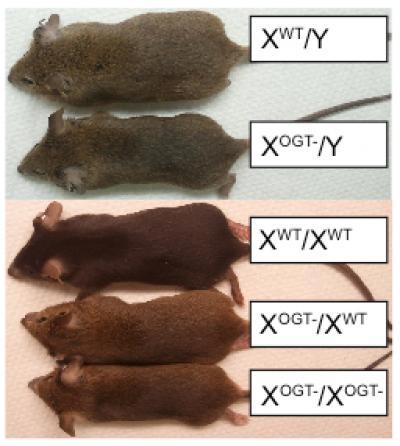 Mice with genetically reduced levels of the protein OGT in the placenta were shorter and leaner than normal mice. Similar phenotypes are seen in mice born to mothers who experienced stress early in pregnancy. The findings support the idea that mitochondrial dysfunction in the hypothalamus is affected by low OGT levels.

Placentas associated with male mice pups born to stressed mothers had reduced levels of the enzyme Hsd17b3, and, as a result, had higher levels of androstenedione and lower levels of testosterone than normal mice.

"This could mean that, with early prenatal stress, males have less masculinization," Bale said. "This is important because autism tends to be thought of as the brain in a hypermasculinized state, and schizophrenia is thought of as a hypomasculinized state. It makes sense that there is something about this process of testosterone synthesis that is being disrupted."

Furthermore, the mice born to mothers with disrupted OGT looked like the offspring of stressed mothers in other ways. Although they were born at a normal weight, their growth slowed at weaning. Their body weight as adults was 10-20 percent lower than control mice.

Because of the key role that that the hypothalamus plays in controlling growth and many other critical survival functions, the Penn Vet researchers then screened the mouse genome for genes with differential expression in the hypothalamus, comparing normal mice, mice with reduced OGT and mice born to stressed mothers.

They identified several gene sets related to the structure and function of mitochrondria, the powerhouses of cells that are responsible for producing energy. And indeed, when compared by an enzymatic assay that examines mitochondria biogenesis, both the mice born to stressed mothers and mice born to mothers with reduced OGT had dramatically reduced mitochondrial function in their hypothalamus compared to normal mice. These studies were done in collaboration with Narayan Avadhani's lab at Penn Vet.

Such reduced function could explain why the growth patterns of mice appeared similar until weaning, at which point energy demands go up.

"If you have a really bad furnace you might be okay if temperatures are mild," Bale said. "But, if it's very cold, it can't meet demand. It could be the same for these mice. If you're in a litter close to your siblings and mom, you don't need to produce a lot of heat, but once you wean you have an extra demand for producing heat. They're just not keeping up."

Bale points out that mitochondrial dysfunction in the brain has been reported in both schizophrenia and autism patients.

In future work, Bale hopes to identify a suite of maternal plasma stress biomarkers that could signal an increased risk of neurodevelopmental disease for the baby.

"With that kind of a signature, we'd have a way to detect at-risk pregnancies and think about ways to intervene much earlier than waiting to look at the term placenta," she said.