Penn researcher traces the history of the American urban squirrel

Until recently, Etienne Benson, an assistant professor in the University of Pennsylvania's Department of History and Sociology of Science, has trained his academic eye on the history of conservation of large, charismatic wildlife, such as tigers, grizzly bears and orcas.

With his latest publication, however, he consciously chose to investigate a creature that may be considered less exotic, and is certainly smaller.

"I wanted to write about something a bit closer to home, about things we see and encounter every day," Benson said. "I wanted to shift the focus to the urban and the quotidian and, in some sense, the trivial, to see what we can learn by looking at trivial nature, or nature that is at risk of being interpreted as trivial."

So he turned his attention to the squirrel.

His paper, "The Urbanization of the Eastern Gray Squirrel in the United States," published in the December issue of the Journal of American History, examines how the now-ubiquitous bushy-tailed critters found homes in American cities, and how their presence there altered people's conceptions of nature and community.

Benson explains that though many people may think that squirrels have simply persisted in urban landscapes since Europeans arrived in the U.S., their presence is actually the result of intentional introductions.

"By the mid-19th century, squirrels had been eradicated from cities," he said. "In order to end up with squirrels in the middle of cities, you had to transform the urban landscape by planting trees and building parks and changing the way that people behave. People had to stop shooting squirrels and start feeding them."

In researching the history of squirrels in American cities, Benson found the first documented introduction occurred in Philadelphia's Franklin Square in 1847. Other introductions followed in Boston and New Haven in the 1850s. These early releases were small in scale, and intended to "beautify and add interest to the parks," Benson says.

These "squirrel experiments" ended by the 1860s, when many of the cities' squirrel populations had died out or were killed amid concern that they would disturb birds and consequently lead to insect problems. But releases began anew in the 1870s, this time on a larger scale as expansive parks were built in New York, Boston, Washington, D.C., Chicago and other cities, providing welcoming habitat for squirrels to live and thrive. By the mid-1880s, the squirrel population in Central Park was estimated at 1,500. 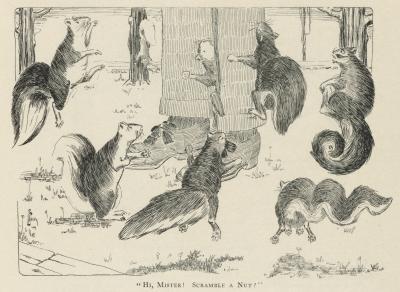 A cartoon from the Harvard Lampoon from 1903 speaks to the ubiquity of gray squirrels in Boston, as well as many other American cities, around the turn of the 20th century.

The presence of squirrels in cities at this time "started getting tied up with the parks movement led by Frederick Law Olmstead," Benson said. "It was related to the idea that you want to have things of beauty in the city, but it was also part of a much broader ideology that says that nature in the city is essential to maintaining people's health and sanity, and to providing leisure opportunities for workers who cannot travel outside the city."

He found several sources, from children's literature to writings of Ernest Thompson Seton, the cofounder of the Boy Scouts, that indicated that feeding squirrels was seen as a way to teach children how to be kind, both to human and nonhuman animals, and "cure them of their tendency toward cruelty."

Though people also fed other urban animals, such as pigeons, at the time, Benson suspected that squirrels might have occupied a unique position, perhaps in part because humans connect more easily with mammals. He wrote that "squirrels' readiness to trust humans and their ability to flourish in the heart of the city seemed to make them living proof of the rewards of extending charity and community beyond the bounds of humanity."

By the first couple of decades of the 20th century, some of the rosy glow toward squirrels had faded, Benson noted. Booming populations began to annoy some city residents, as the animals took up residence in attics, bit people trying to feed them, dug up gardens and scared away songbirds from feeders.

By the time the environmental movement took hold in the 1960s and 1970s, Benson argued, squirrels in the urban environment were no longer widely seen as morally significant members of the community and instead began to be viewed with a more ecological mindset. Ideas of letting them live out life "as nature intended" took a stronger hold.

"There is a shift at the end of the 20th century, where it becomes almost a crime or a sin to feed animals, which is entirely the opposite of where it was earlier," he said.

Next, Benson plans to explore how wildlife has been impacted by human-built infrastructure, an idea spurred on by a scene he routinely observes from his Philadelphia home.

"From my back porch I can see two or three squirrels that regularly use a wire to get across the road," he says. "I want to look at how the systems we build get appropriated by other organisms, and think about how nonhumans are cobbling together their own infrastructure systems to live in human-dominated landscapes."