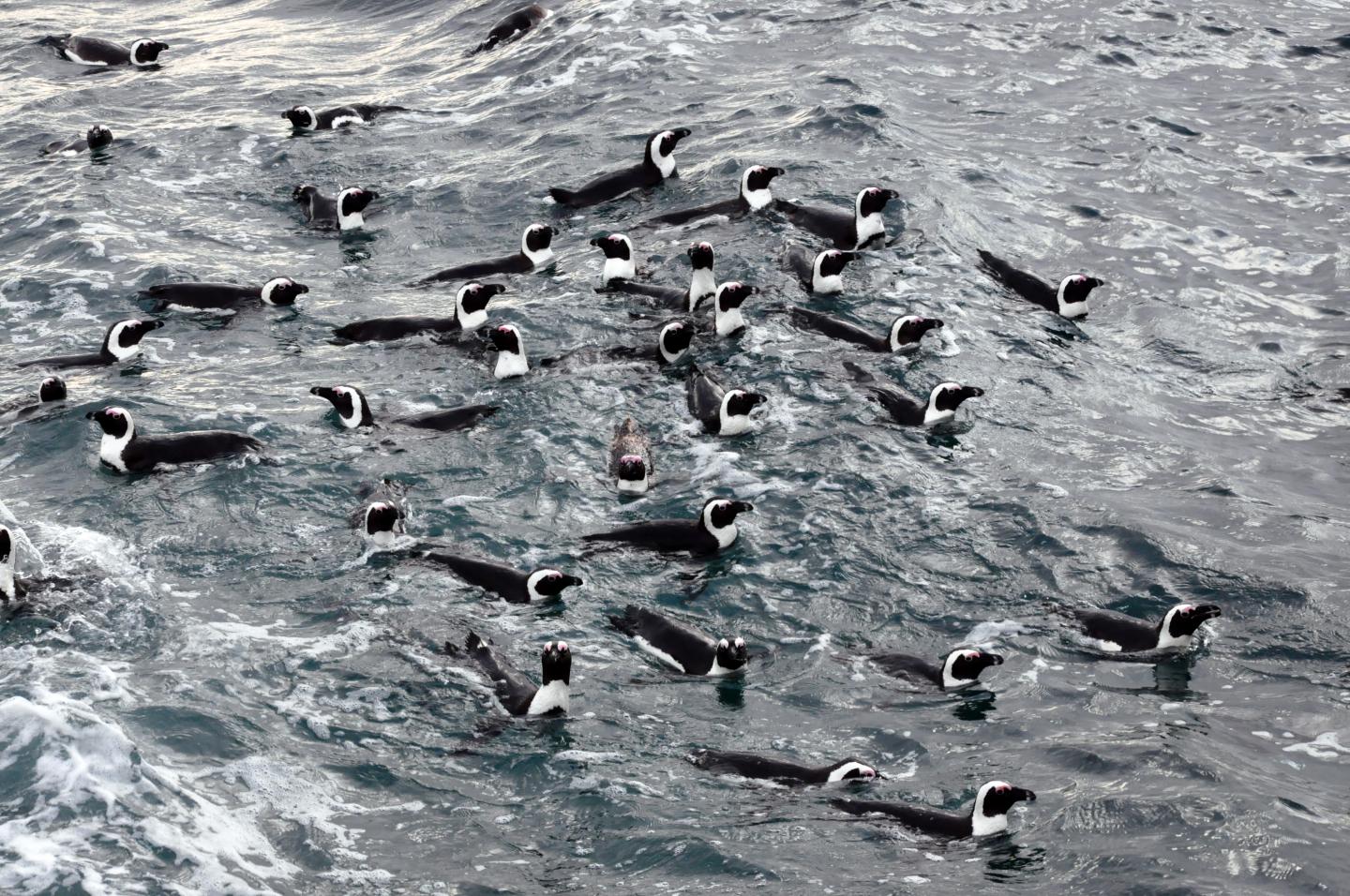 IMAGE: These are African penguins at sea.

How adult penguins fish and the body condition of their chicks are directly linked to local fish abundance, and could potentially inform fishery management, a new study has found.

The researchers studied an endangered African penguin colony during a rare three-year closure of commercial fisheries around Robben Island, South Africa, and their findings are published today in the Journal of Applied Ecology.

Fishing is often considered to be one of the biggest drivers of biodiversity loss in the ocean. It is so widespread that we lack an understanding of the 'natural' relationships between marine predators and their prey, and thus the extent to which predators are disrupted by competition from fisheries.

This is a critical knowledge gap since many marine predators such as penguins are considered indicator species: a species whose success indicates the condition of their habitat.

Dr Kate Campbell, who led the research at the University of Cape Town as part of her PhD project, said: "Understanding how African penguins forage to feed their chicks in their variable marine environment can help us identify conservation measures for these endangered populations."

"A three-year commercial fisheries closure around Robben Island, South Africa created a unique opportunity to study how African penguins directly respond to natural changes in local abundance of their prey - anchovies and sardines", she added.

The researchers estimated fluctuations in prey fish populations over three years within the fisheries closure zone (20km radius around Robben Island) using 12 hydro-acoustic surveys, which detect the presence of anchovies and sardines by bouncing sound waves off their swim bladders (gas-filled organs).

Over the same time period researchers used GPS-temperature-depth loggers to monitor adult penguins' fishing behaviours for one trip to sea per breeding season. At the Robben Island colony, researchers also measured the diet of breeding adults and the body condition of chicks.

They found that local abundance of anchovy and sardine was directly linked to African penguin foraging behaviour and chick offspring condition; a common assumption about predator-prey relationships which has rarely been tested in the absence of fishing.

Dr Richard Sherley of the University of Exeter said: "Interestingly, the variation in foraging behaviour between individuals also increased when prey fish were scarcer."

"While some 'superstar' penguins find food easily, others are less successful. Once food gets harder to find, more individuals will start to struggle and work harder, but they will do so at different rates, increasing the variation we see in foraging effort", he added.

These results indicate that penguin foraging behaviour and chick condition could be key indicators for local fish abundance, making a case for their inclusion in monitoring of local ecosystem health.

"Since these short-term changes will likely have knock-on effects for chick survival and penguin population size, they could be used as powerful early warning signs to inform fisheries' policies and marine conservation efforts", said Campbell.

"Hopefully, In the future, we could aim to effectively balance fishery management with penguins' needs, to reduce the impact on local economies whilst maximising the benefits to our oceans", Sherley concluded.