Scientists are continually unearthing new facts about Homo sapiens from the mummified remains of Ötzi, the Copper Age man, who was discovered in a glacier in 1991. Five years ago, after Ötzi's genome was completely deciphered, it seemed that the wellspring of spectacular discoveries about the past would soon dry up. An international team of scientists working with paleopathologist Albert Zink and microbiologist Frank Maixner from the European Academy (EURAC) in Bozen/Bolzano have now succeeded in demonstrating the presence of Helicobacter pylori in Ötzi's stomach contents, a bacterium found in half of all humans today. The theory that humans were already infected with this stomach bacterium at the very beginning of their history could well be true. The scientists succeeded in decoding the complete genome of the bacterium.

When EURAC's Zink and Maixner first placed samples from the Iceman's stomach under the microscope in their ancient DNA Lab at EURAC, almost three years ago, they were initially sceptical.

"Evidence for the presence of the bacterium Helicobacter pylori is found in the stomach tissue of patients today, so we thought it was extremely unlikely that we would find anything because Ötzi's stomach mucosa is no longer there," explains Zink. Together with colleagues from the Universities of Kiel, Vienna and Venda in South Africa as well as the Max Planck Institute for the Science of Human History in Jena, the scientists tried to find a new way to proceed. "We were able to solve the problem once we hit upon the idea of extracting the entire DNA of the stomach contents," reports Maixner. "After this was successfully done, we were able to tease out the individual Helicobacter sequences and reconstruct a 5,300 year old Helicobacter pylori genome." 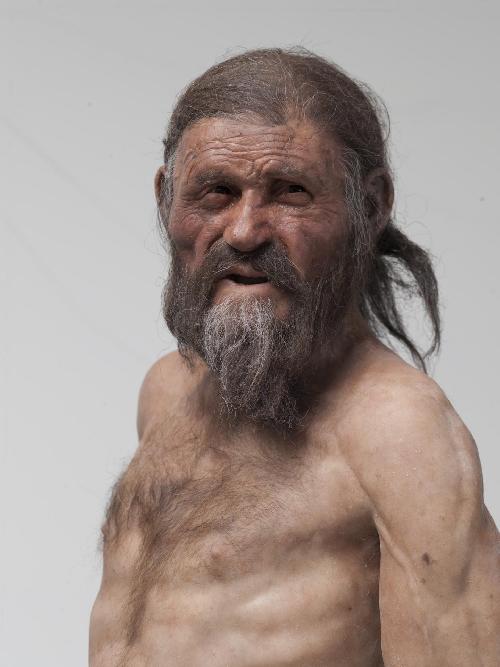 The scientists found a potentially virulent strain of bacteria, to which Ötzi's immune system had already reacted. "We showed the presence of marker proteins which we see today in patients infected with Helicobacter," said the microbiologist.

A tenth of infected people develop further clinical complications, such as gastritis or stomach ulcers, mostly in old age. "Whether Ötzi suffered from stomach problems cannot be said with any degree of certainty," says Zink, "because his stomach tissue has not survived and it is in this tissue that such diseases can be discerned first. Nonetheless, the preconditions for such a disease did in fact exist in Ötzi."

After completing their stomach biopsy, the two EURAC scientists transferred the genome data for analysis by their colleague Thomas Rattei from the University of Vienna. Rattei, in collaboration with geneticists from the USA, South Africa and Germany, came to a surprising conclusion:"We had assumed that we would find the same strain of Helicobacter in Ötzi as is found in Europeans today," explains the computational biologist. "It turned out to be a strain that is mainly observed in Central and South Asia today."

The scientists assume that there were originally two strain types of the bacterium, an African and an Asian one, which at some point recombined into today's European version. Since bacteria are usually transmitted within the family, the history of the world's population is closely linked to the history of bacteria. Up till now, it had been assumed that Neolithic humans were already carrying this European strain by the time they stopped their nomadic life and took up agriculture. Research on Ötzi, however, demonstrates that this was not the case.

"The recombination of the two types of Helicobacter may have only occurred at some point after Ötzi's era, and this shows that the history of settlements in Europe is much more complex than previously assumed," says Maixner.

Further studies will be needed to show to what extent these bacteria living inside the human body can help us understand how humans developed. The current investigations, the results of which have just been published in Science magazine, invite further research.

"Now that we are aware of how it works," says Zink, "we are keen to continue." Several research projects to take place in South America and Asia are currently at the planning stage.