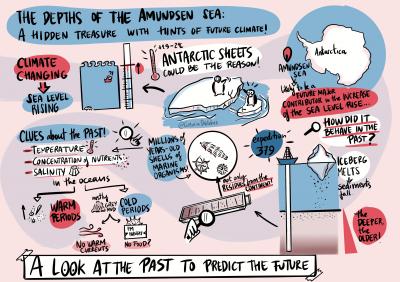 IMAGE: Illustration from the article "From the depths of the Amundsen Sea " (p. 12) by Margot Courtillat in Past Global Changes Horizons magazine, volume 1.

Past Global Changes Horizons is a scientific review of why the study of Earth's history is important, and uses comics, pictures, and drawings that support short papers with strong messages about past sciences and how to prepare for a changing future. Articles cover different environments across the planet, from caves to oceans, and from Antarctica to the Rift valley in Africa.

Each of the 18 contributions addresses a scientific question and includes appealing and understandable figures or images, without sacrificing scientific rigor. Tips and suggestions for further research and discussion topics are also included, meaning Horizons is not only designed for students but also potentially for teachers.

It is currently an online magazine, but there will be the option (via the Past Global Changes website) to request free hard copies in May 2021. A second print run is planned for October 2021.

The first issue of Horizons was edited by Graciela Gil-Romera and Boris Vannière, and the editor-in-chief is PAGES' Science Officer Sarah Eggleston. The magazine is in English.

Graciela Gil-Romera said Horizons was created due to a lack of relatable outreach and science communication resources for this influential group.

"This is precisely the age group where more is needed to help shape their transition into decision-makers in adulthood," she said.

"The younger generation is being bombed with fake news, extremism, and environmental anxiety. Scientists have produced this magazine for them to show that we can all be scientists, and to create not only more environmental awareness, but also to inspire them that there is still time to build a better future, and we know this thanks to the past."

Boris Vanniere believes it is imperative for active scientists to inspire and mobilise the next generation.

"Dissemination of scientific knowledge requires more attention and direct efforts on the part of scientists to reach and address all members of society, especially the younger generation," he said.

"The objective of education is to contribute to citizen power and democratic life. Only well-informed people can judge government action. Scientific advisors are useful, but only citizens who can nurture their free will will be able to see clearly the promises and uncertainties ahead, and then be freer and stronger."

Horizons is planned as an annual publication. It is a great opportunity for more senior scientists to reach out to the next generation and get them excited about their individual research topics. All topics that echo the younger generation's questions about our relationship with the environment and the Earth system, and their history, are encouraged for future issues.