Stem cells in the adult pancreas have been identified that can be turned into insulin producing cells, a finding that means people with type 1 diabetes might one day be able to regenerate their own insulin-producing cells.

The discovery was made by scientists from the Walter and Eliza Hall Institute and provides further evidence that stem cells don't only occur in the embryo.

The ability to produce the hormone insulin is crucial for controlling blood sugar (glucose) levels. In people with type 1 diabetes the body's immune system destroys the insulin-producing beta cells of the pancreas, leading to a potentially fatal elevation of blood glucose levels.

People with type 1 diabetes rely on multiple daily injections of insulin, or an insulin infusion pump, to control their blood glucose, but control is not perfect and they are at risk of serious long-term health complications. 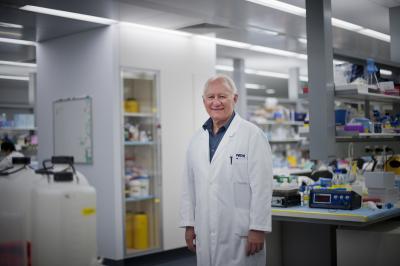 Professor Len Harrison (pictured) and Dr Ilia Banakh have identified stem cells in the adult pancreas that can be turned into insulin producing cells, a discovery that may lead to new diabetes treatments.

Dr Ilia Banakh and Professor Len Harrison from the institute's Molecular Medicine division have not only identified and isolated stem cells from the adult pancreas, but developed a technique to drive these stem cells to become insulin-producing cells that can secrete insulin in response to glucose.

"In the long-term, we hope that people with type 1 diabetes might be able to regenerate their own insulin-producing cells. This would mean that they could make their own insulin and regain control of their blood glucose levels, curing their diabetes. Of course, this strategy will only work if we can devise ways to overcome the immune attack on the insulin-producing cells, that causes diabetes in the first place," Professor Harrison said.