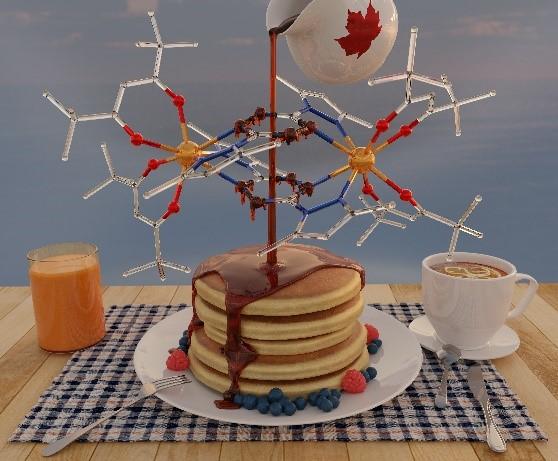 Image:
Reproduced from Inorganic Chemistry Frontiers., 2020, 7, 2592-2601 with permission from The Royal Society of Chemistry.

A Canadian-Finnish collaboration has led to the discovery of a novel magnetic compound in which two magnetic dysprosium metal ions are bridged by two aromatic organic radicals forming a pancake bond. The results of this study can be utilized to improve the magnetic properties of similar compounds. The theoretical investigation of the study was carried out by the Academy Research Fellow Jani O. Moilanen at the University of Jyväskylä, whereas the experimental work was performed at the University of Ottawa in the groups of Profs. Muralee Murugesu and Jaclyn L. Brusso. The research results were published in the well-recognized chemistry journal - Inorganic Chemistry Frontiers in July 2020 - with the cover art.

Excellent magnetic properties of the reported compound at the elevated temperatures originated from the optimal three-dimensional structure of the compound. In theory, similar design principles could be used for single-molecule magnets containing more than one metal ion but controlling the three-dimensional structure of multinuclear compounds is much more challenging.

Bridging organic radicals were utilized in the novel compound

Instead of fully controlling the three-dimensional structure of the reported compound, a different design strategy was utilized in this study.

The pancake bond in the novel compound was very strong. Therefore, the unpaired electrons of the organic radicals did not interact strongly with the unpaired electrons of the dysprosium ions and the compound functioned as a single-molecule magnet only at low temperatures. However, the study paves the way for the new design strategy for novel multinuclear single-molecule magnets and has initiated further research.

"Computational chemistry methods provided important insights into the electronic structure and magnetic properties of the compound that can be utilized in future studies. By choosing the right kind of organic radicals we can not only control the nature of the pancake bond between the radicals but also enhance the magnetic properties of the compound overall", Academy Research Fellow Jani O. Moilanen from the University of Jyväskylä comments.