Heat stored in the western Pacific Ocean caused by an unprecedented strengthening of the equatorial trade winds appears to be largely responsible for the hiatus in surface warming observed over the past 13 years.

New research published today in the journal Nature Climate Change indicates that the dramatic acceleration in winds has invigorated the circulation of the Pacific Ocean, causing more heat to be taken out of the atmosphere and transferred into the subsurface ocean, while bringing cooler waters to the surface.

"Scientists have long suspected that extra ocean heat uptake has slowed the rise of global average temperatures, but the mechanism behind the hiatus remained unclear" said Professor Matthew England, lead author of the study and a Chief Investigator at the ARC Centre of Excellence for Climate System Science.

"But the heat uptake is by no means permanent: when the trade wind strength returns to normal - as it inevitably will - our research suggests heat will quickly accumulate in the atmosphere. So global temperatures look set to rise rapidly out of the hiatus, returning to the levels projected within as little as a decade." 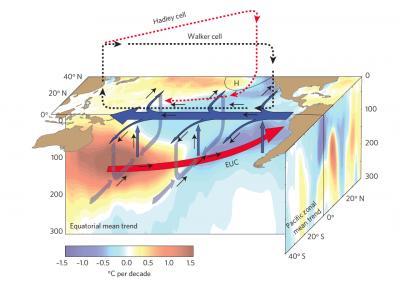 This is a schematic of the trends in temperature and ocean-atmosphere circulation in the Pacific over the past two decades. Color shading showsobserved temperature trends (C per decade) during 1992-2011 at the sea surface (Northern Hemisphere only), zonally averaged in the latitude-depthsense (as per Supplementary Fig. 6) and along the equatorial Pacific in the longitude-depth plane (averaged between 5 N S). Peak warming in thewestern Pacific thermocline is 2.0C per decade in the reanalysis data and 2.2C per decade in the model. The mean and anomalous circulation in thePacific Ocean is shown by bold and thin arrows, respectively, indicating an overall acceleration of the Pacific Ocean shallow overturning cells, the equatorialsurface currents and the Equatorial Undercurrent (EUC). The accelerated atmospheric circulation in the Pacific is indicated by the dashed arrows; includingtheWalker cell (black dashed) and the Hadley cell (red dashed; Northern Hemisphere only). Anomalously high SLP in the North Pacific is indicated by thesymbol "H." An equivalent accelerated Hadley cell in the Southern Hemisphere is omitted for clarity.

The strengthening of the Pacific trade winds began during the 1990s and continues today. Previously, no climate models have incorporated a trade wind strengthening of the magnitude observed, and these models failed to capture the hiatus in warming. Once the trade winds were added by the researchers, the global average temperatures very closely resembled the observations during the hiatus.

"The winds lead to extra ocean heat uptake, which stalled warming of the atmosphere. Accounting for this wind intensification in model projections produces a hiatus in global warming that is in striking agreement with observations," Prof England said.

"Unfortunately, however, when the hiatus ends, global warming looks set to be rapid."

The impact of the trade winds on global average temperatures is caused by the winds forcing heat to accumulate below surface of the Western Pacific Ocean. 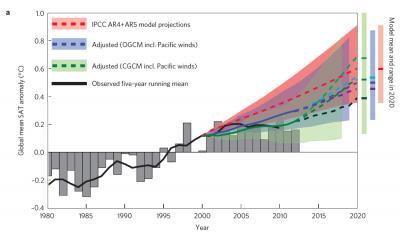 Observations are shownas annual anomalies relative to the 1980-2012 mean (grey bars) and a five-year running mean (black solid line). Model projections are shown relative tothe year 2000 and combine the CMIP3 and CMIP5 multi-model mean (red dashed line) and range (red shaded envelope). The projections branch o thefive-year running mean of observed anomalies and include all simulations as evaluated by the IPCC AR4 and AR5. The cyan, blue and purple dashed linesand the blue shading indicate projections adjusted by the trade-wind-induced SAT cooling estimated by the ocean model (OGCM), under three scenarios:the recent trend extends until 2020 before stabilizing (purple dashed line); the trend stabilizes in year 2012 (blue dashed line); and the wind trend reversesin 2012 and returns to climatological mean values by 2030 (cyan dashed line). The black, dark green and light green dashed lines are as per the above threescenarios, respectively, only using the trade-wind-induced SAT cooling derived from the full coupled model (CGCM). Shading denotes the multi-modelrange throughout.

"This pumping of heat into the ocean is not very deep, however, and once the winds abate, heat is returned rapidly to the atmosphere" England explains.

"Climate scientists have long understood that global average temperatures don't rise in a continual upward trajectory, instead warming in a series of abrupt steps in between periods with more-or-less steady temperatures. Our work helps explain how this occurs," said Prof England.

"We should be very clear: the current hiatus offers no comfort - we are just seeing another pause in warming before the next inevitable rise in global temperatures."

This image shows normalized histograms of Pacific trade wind trends (computed over 6 N S and 180W) for all 20-year periods usingmonthly data in observations (1980-2011) versus available CMIP5 models (1980-2013). The observed trend strength during 1992-2011 is indicated.

(Photo Credit: For articles on this paper only. : Nature Climate Change. Recent intensification of wind-driven circulation in the Pacific and the ongoing warming hiatus. Prof Matthew H England et al.)