Decades of overfishing in the English Channel has resulted in the removal of many top predators from the sea and left fishermen 'scraping the barrel' for increasing amounts of shellfish to make up their catch.

Sharks, rays, cod, haddock and many other species at the head of the food chain are at historic lows with many removed from the area completely.

These are some of the findings of a study led by marine biologists at Plymouth University, in association with international non-profit research organization WorldFish. They analysed catches over the past 90 years and found significant evidence of the practice of 'fishing down the food web'.

The report, published in the PLOS ONE journal, used catch statistics from the International Council for the Exploration of the Seas to establish a 'mean trophic level' for catches – an average for how far up the food chain the fish are located.

Professor Jason Hall Spencer, of the School of Marine Science and Engineering, and the Marine Institute, said: "It is clear from our analyses that fishing pressure has caused significant changes to food webs of the English Channel over the past 90 years. The mean Trophic Level of English Channel landings has fallen by 0.1 unit per decade, one of the fastest rates reported among other heavily fished regions of the world, providing yet more evidence that 'fishing down food webs' is a worldwide phenomenon."

The falling levels of finfish has been counterbalanced by increased landings of shellfish such as scallops, and of squid, octopus and cuttlefish. This has in turn raised concerns over long-term sustainability, and the potential damage done to the marine environment as a result of dredging and trawling for these invertebrates.

Plymouth researcher Carlotta Molfese said: "Fisheries typically remove top predators first and as a result their direct competitors and prey are able to prosper, affecting the overall productivity and ecological stability of the ecosystem. Severe declines in the populations of major predator species have now been reported around the world."

"WorldFish research has shown that a decline of finfish species has been followed by an increase in their invertebrate prey, and although new and economically viable fisheries have developed for these new target species, concerns have been raised about their long-term sustainability," added Doug Beare of WorldFish. "We promote a sustainable approach to fisheries that will help to protect our natural resources and ensure that fish stocks are available for future generations. Solid global and regional governance of these vital resources will ensure that we can produce enough fish for everyone."

The researchers say that far from being a modern phenomenon, overfishing can be traced as far back as the 19th century, with declining stocks reported in 1863. But geographic expansion into new fishing grounds and improved technology combined to maintain increased landings.

Professor Hall-Spencer added: "All around the UK we are scraping the barrel, destructively dredging the seabed for scallops and prawns as fish have disappeared. When destructive fishing practices are banned, marine life soon recovers. So we urgently need a network of recovery zones in the English Channel to allow marine life to bounce back." 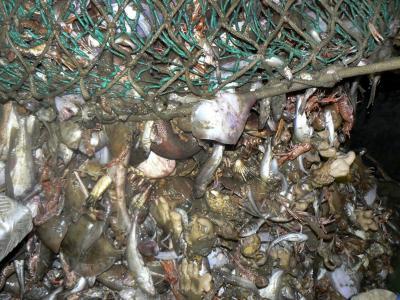 The discards from a prawn trawl in the Irish Sea are shown.