Our gut microbiome is always changing; it's also remarkably stable

Turnover is to be expected in the gut--as soon as one bacterium leaves, another is ready to divide and take its place. The question, explored in a Review published March 17 in Trends in Microbiology, part of a special issue on microbial endurance, is how our gut remains healthy under this constantly enacted succession plan. A growing body of research indicates that different species of microbes fulfil the same functions in the gut, ensuring stability in the face of constant disturbance.

Humans and their microbes are part of an ancient symbiotic relationship. We provide our gut bacteria with a place to live and nutrients to grow, while they help us break down food and fight off more pathogenic invaders. Daily changes such as meals or exercise may cause some of our intestinal tenants to die off, but these populations have evolved to hold steady, regrow, or be replaced with similarly acting bacteria. Even with a revolving door of bacterial species, our bodies continue to function normally.

But this is not always the case. At least 50 disorders are associated with gut microbes that have been knocked out of balance, and many potential treatments--from probiotics to fecal transplants--depend on the idea that a person's microbiota can be changed for the better. The problem is that even with the improvements associated with these therapies, they are not long lasting. There's something that brings an organism's microbiome back to a base point. 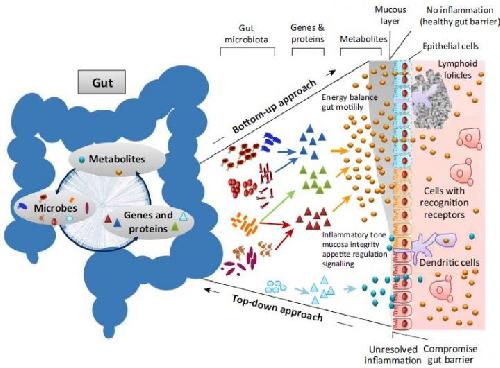 This figure shows how microbiota species are interchangeable in terms of functions by means of the metabolites produced by the action of gene products contained in the gut bacteria. Credit: Moya and Ferrer/Trends in Microbiology 2016

"You and I will have different microbes in our bodies, so there are some kind of genetic factors in the human host that make individuals more susceptible to harboring particular bacteria," says Review coauthor Andrés Moya, a geneticist with an interest in evolutionary biology at FISABIO-Universitat de València in Spain. "We don't understand these differences yet, and it's an area that needs to be better studied."

Moya and second coauthor Manuel Ferrer of the Consejo Superior de Investigaciones Científicas, also in Spain, say that most of our research focus on gut microbes is on looking at their individual functions and the diversity of gut microbes in different populations. For example, we know that lean (under antibiotic treatment) and obese individuals have interchangable types of bacteria related to breaking down sugar or processing carbohydrates. What we don't know is what role these bacteria play in the larger microbiome community.

The researchers make the case for studying the human microbiota as an intestinal ecosystem, by concentrating more on how the various species work with one another and our own cells. Recent work has shown tremendous genetic transfer between the bacteria of the gut, indicating that they have evolved specialized core functions. This top-down approach could help us understand the role these bacteria play in the human body and what leads to clinical symptoms when they are in dysbiosis.

"When we are born, we are not alone. We already have different bacterial species that are interacting with our human cells--they are not independent, trying to survive in our gut, they are forming something like a superspecies," says Moya, also a researcher from the Genomics and Health Area of the FISABIO Foundation. "The microbiome may be the last human organ to be studied."