Eggs from head lice, also called nits, are incredibly difficult to remove. Female lice lay eggs directly onto strands of hair, and they cement them in place with a glue-like substance, making them hard to get rid of. In fact, the eggs are glued down so strongly that they will stay in place even after hair has been treated with pediculicides -- substances used to kill lice.

Some shampoos and conditioners that contain chemicals or special oils are marketed as nit-removal products. However, new research just published in the Journal of Medical Entomology shows that ordinary hair conditioner is just as effective.

In an article called "Efficacy of Products to Remove Eggs of Pediculus humanus capitis (Phthiraptera: Pediculidae) From the Human Hair," (DOI: http://dx.doi.org/10.1603/ME13106) scientists from Belgium gathered 605 hairs from six different children. Each hair had a single nit attached to it. Approximately 14% of the eggshells contained a dead egg, whereas the rest were empty. 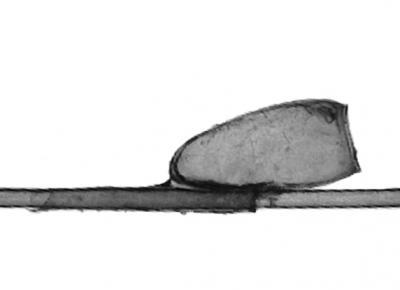 This shows an egg from a head louse, Pediculus humanus capitis, cemented to a human hair.

However, they found no significant differences between the ordinary conditioners and the special nit-removal products. In all cases, less force was required to remove the nits after the hair had been treated, but the effectiveness of the products was essentially the same.

The authors hypothesize that the deionized water was effective because it acts as a lubricant, so less friction is needed to remove the nits from the hairs. The same goes for the conditioners.

"Treatment with conditioner reduces the coefficient of friction of undamaged and damaged hair," they write. "As a consequence, conditioners will facilitate nit removal."