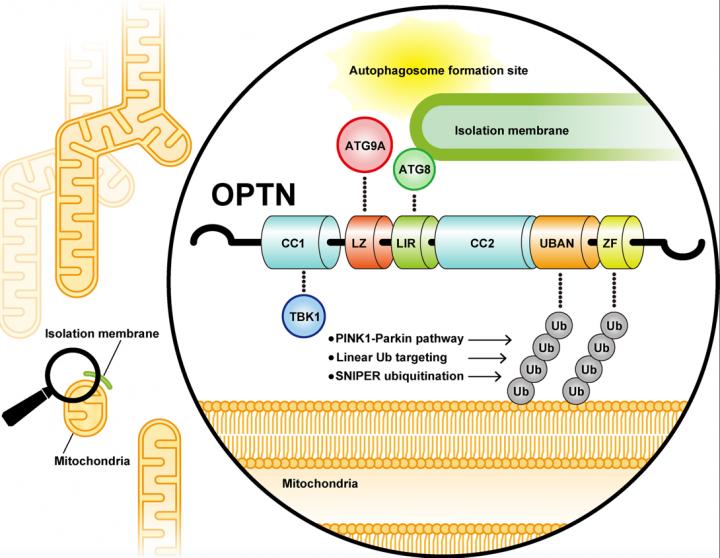 Researchers at TMIMS have revealed that PINK1 (a serine/threonine kinase) and Parkin (a ubiquitin ligating enzyme: E3) work together to ubiquitylate the outer membrane proteins of damaged mitochondria to induce selective autophagy called mitophagy. Dysfunction of this type of mitophagy causes a decrease in mitochondrial quality and an overproduction of ROS, and thus is linked to the development of hereditary recessive Parkinson's disease.

In cells, ubiquitin functions as a signal for selective autophagy. It has been suggested that autophagy-adaptor proteins, which bind to both the ubiquitin and factors for autophagosome formation, are involved in a selective autophagy. Mammalian cells encode five autophagy adaptors (p62, NBR1, TAX1BP1, NDP52, OPTN), and OPTN and NDP52 were reported to play critical roles in PINK1/Parkin-mediated mitophagy. However, the molecular mechanisms by which OPTN and NDP52 induce mitophagy remained obscure. It was also controversial whether PINK1 on damaged mitochondria and/or phosphorylated ubiquitin produced by PINK1 function as a direct autophagy signal or not. In this study, Yamano and colleagues at TMIMS clarified a novel mechanism by which the ubiquitin chain conjugated by PINK1/Parkin is read out as an autophagy signal.

Next, the intracellular localizations of autophagy adaptor proteins (p62, NBR1, NDP52, OPTN) were examined following induction of Parkin-mediated mitophagy. All autophagy adaptor proteins are recruited on the damaged mitochondria. However, the researchers found that p62 and NBR1 evenly distributed throughout the mitochondria, whereas NDP52 and OPTN localized only on restricted areas of mitochondria. Since the autophagosome marker molecule LC3B also localized in this subdomain, it was expected that NDP52 and OPTN specifically accumulate at the contact site between ubiquitylated mitochondria and autophagosomes.

Next, Yamano and colleagues wanted to elucidate the molecular mechanisms how NDP52 and OPTN convert ubiquitylation to autophagic degradation signals. To address this issue, the researchers used Fluoppi system (Watanabe et al. Sci Rep 2017) in which protein-protein interactions can be detected as fluorescent-foci in cells. In the Fluoppi system, protein 'A' fused with a homooligomeric Ash tag and protein 'B' fused with a homo-tetrameric Azami Green (AG) are co-expressed. If 'A' interacts with 'B', they form phase-separated fluorescent foci in cells thorough the multivalent interactions such as the multimerization of Ash tag, the tetramerization of AG, and the interaction between 'A' and 'B'.

When a tandem ubiquitin fused with Ash tag and a autophagy-adaptor protein fused with AG were co-expressed in cells, fluorescent foci formed via a phase separation. As described above, NDP52 and OPTN localize at the putative contact sites between mitochondria and autophagosomes. Therefore, the researchers examined whether LC3 family proteins accumulate in the foci formed by the autophagy adaptor and ubiquitin. Unexpectedly, phase-separated foci formed by p62 or NBR1, rather than those by NDP52 or OPTN, contained more LC3 family proteins. Since p62 and NBR1 are dispensable for PINK1/Parkin-mediated mitophagy, these results suggest that the critical roles of OPTN and NDP52 in mitophagy are not solely derived from the binding ability to LC3.

Yamano and colleagues then searched for the autophagy-related proteins (ATG proteins) that cooperates with OPTN and ubiquitin. Although ATG13, ATG14, WIPI2, and ATG16L1 were not contained in the OPTN fluorescent foci, ATG9A was completely merged with the OPTN foci. Since ATG9A was not observed in the foci formed by other autophagy adaptors such as NDP52, p62, and NBR1, these results indicate that OPTN specifically interacts with ATG9A.

In order to narrow down the site essential for OPTN-ATG9A interaction, a series of deletion mutants and several amino acid substitutions of OPTN were constructed. The researchers finally revealed that the leucine zipper domain in OPTN is essential for ATG9A binding. In fact, OPTN possessing a mutation in the leucine zipper domain formed fluorescent "Fluoppi foci" with ubiquitin equivalent to wild-type OPTN, but the localization of ATG9A into the fluorescent foci was completely impaired.

"Autophagy adaptors have been defined as proteins that can bind to both ubiquitin and LC3. However, recent works including this study highlight the importance of novel interactions between autophagy-adaptors and core machineries in autophagy." said Dr. Yamano. "In the future, we would like to apply this experimental approach to other autophagy adaptors to identify new interactants in a selective autophagy."