Today, the majority of cancers are detected on the macroscopic level, when the tumor is already composed of millions of cancer cells and the disease is starting to advance into a more mature phase. But what if we could diagnose cancer before it took hold- while it was still only affecting a few localized cells? It would be like putting a fire out while it was still just a few sparks versus after having already caught on and spread to many areas of the house.

An international team of researchers, led by ICFO- Institute of Photonic Sciences in Castelldefels, announce the successful development of a "lab-on-a-chip" platform capable of detecting protein cancer markers in the blood using the very latest advances in plasmonics, nano-fabrication, microfluids and surface chemistry. The device is able to detect very low concentrations of protein cancer markers in blood, enabling diagnoses of the disease in its earliest stages. The detection of cancer in its very early stages is seen as key to the successful diagnosis and treatment of this disease.

This cancer-tracking nano-device shows great promise as a tool for future cancer treatments, not only because of its reliability, sensitivity and potential low cost, but also because of its easy carry-on portable properties, which is foreseen to facilitate effective diagnosis and suitable treatment procedures in remote places with difficult access to hospitals or medical clinics.

HOW DOES IT WORK: Although very compact (only a few square centimeters), the lab-on-a-chip hosts various sensing sites distributed across a network of fluidic micro-channels that enables it to conduct multiple analyses. Gold nano-particles lie on the surface of the chip and are chemically programed with an antibody receptor in such a way that they are capable of specifically attracting the protein markers circulating in blood. When a drop of blood is injected into the chip, it circulates through the micro-channels and if cancer markers are present in the blood, they will stick to the nano-particles located on the micro-channels as they pass by, setting off changes in what is known as the "plasmonic resonance". The device monitors these changes, the magnitude of which are directly related to the concentration/number of markers in the patient blood thus providing a direct assessment of the risk for the patient to develop a cancer. 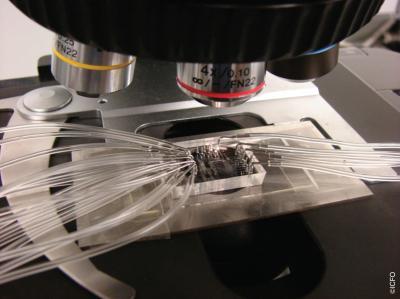 This shows the lab-on-a-chip.

ICREA Professor at ICFO Romain Quidant, coordinator of the project comments, "the most fascinating finding is that we are capable of detecting extremely low concentrations of this protein in a matter of minutes, making this device an ultra-high sensitivity, state-of-the-art, powerful instrument that will benefit early detection and treatment monitoring of cancer". In 2009, Prof. Quidant's research group at ICFO, in collaboration with several groups of oncologists, joined the worldwide effort devoted to the ultra-sensitive detection of protein markers located on the surface of cancer cells and in peripheral blood, which had been determined to be a clear indicator of the development of cancer. In 2010, they successfully obtained funding for the project called SPEDOC (Surface Plasmon Early Detection of Circulating Heat Shock Proteins and Tumor Cells) under the 7th Framework Program (FP7) of the European Commission. The effort was also boosted by generous philanthropic support from Cellex Foundation Barcelona. Today's announcement is an important outcome of this project. 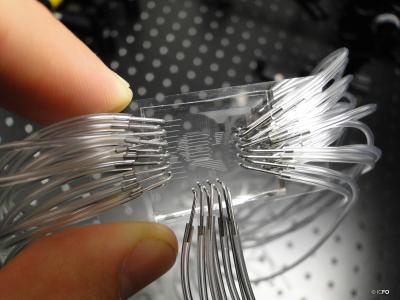 This shows the lab-on-a-chip. 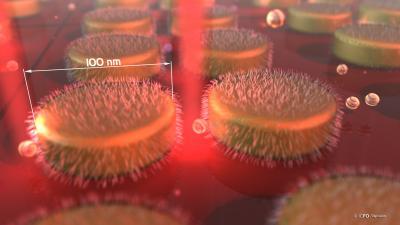