One of the last strongholds for Western chimpanzees

When Liberia enters the news it is usually in the context of civil war, economic crisis, poverty or a disease outbreak such as the recent emergence of Ebola in West Africa. Liberia's status as a biodiversity hotspot and the fact that it is home to some of the last viable and threatened wildlife populations in West Africa has received little media attention in the past. This is partly because the many years of violent conflict in Liberia, from 1989 to 1997 and from 2002 to 2003, thwarted efforts of biologists to conduct biological surveys. An international research team, including scientists of the Max Planck Institute for Evolutionary Anthropology in Leipzig, Germany, has now counted chimpanzees and other large mammals living in Liberia. The census revealed that this country is home to 7000 chimpanzees and therefore to the second largest population of the Western subspecies of chimpanzees. As Liberia has released large areas for deforestation, the local decision-makers can now use the results of this study in order to protect the chimpanzees more effectively.

Following the complete war-time collapse of the country's economy, Liberia's government has been trying to fuel economic growth by selling large amounts of its rich natural resources, including rubber, timber and minerals. Here, accurate biological datasets on the distribution and abundance of wildlife populations are key for making evidence-based management decisions that balance economic and conservation priorities. In addition, they are important for locating and delineating conservation priority areas, making assessments of anthropogenic threats, and proposing mitigation measures to policy-makers.

To close this data gap, researchers from the Max Planck Institute for Evolutionary Anthropology in Leipzig, Germany, The Wild Chimpanzee Foundation in Abidjan, Côte d'Ivoire and The Royal Society for the Protection of Birds in Bedfordshire, UK, via the Across the River Project, together with experienced rangers from the Forestry Development Authority in Liberia, local research assistants from Liberia and Sierra Leone and graduate students from the University of Liberia, embarked on a remarkably ambitious project: a survey of chimpanzees and other large mammals across the entire country of Liberia. For two years, the survey teams searched for the presence of chimpanzees and other large mammals in more than 100 locations throughout the country.

"This project was logistically very challenging", says corresponding author Jessica Junker, who also supervised all data collection in the field. "To reach these locations, we occasionally had to drive for two days, then continue on motorbikes for several hours before embarking on a 20 to 30 kilometres hike during which we sometimes had to cross rivers, climb mountains and pass through steep valleys." But the effort paid off. With an estimated population of more than 7000 individuals, Liberia now officially holds the second largest population of West African chimpanzees after Guinea. Even more excitingly for conservation, due to its relatively wide and continuous distribution within the country, the chimpanzee population of Liberia is also probably one of most viable chimpanzee populations in West Africa, making it a regional conservation priority. 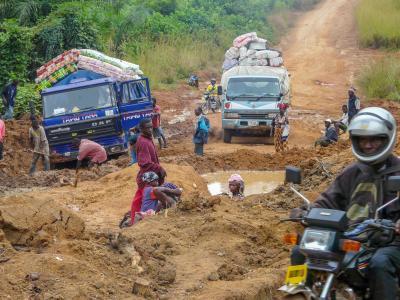 Logistics were extremely challenging because Liberia's infrastructure was almost completely destroyed during the civil war and because of the remoteness of some of the survey locations.

Surprisingly, the survey results showed that more than 70 percent of the chimpanzees as well as some of the most species-diverse communities of large mammals occurred outside the fully-protected areas, which currently include only 3.8 percent of the country's forests. In 2003, the Liberian government agreed to increase the extent of the protected area network to conserve at least 30 percent of the country's forests. "The results of our study provide crucial information for site prioritization and selection in this ongoing process," says lead author Clement Tweh of the Wild Chimpanzee Foundation in Liberia. "For example, the shape and location of some of the proposed protected areas might have to be re-considered. Also, it will be necessary to rapidly implement full protection status for proposed conservation priority areas, as future mining and forestry projects are encroaching fast."

Since the ban on timber exports was repealed in 2006, more than 20,000 square kilometres of forest have already been assigned as forestry concessions and awarded to international and local investors. Additionally, since 2010, logging companies were issued so-called Private Use Permits, which were subject to virtually no sustainability requirements and accounted for almost half of Liberia's remaining primary forest. Fortunately, President Ellen Johnson Sirleaf recently withdrew almost half of these allocations, thus saving tens of thousands of square kilometres of primary tropical rainforest. "Our survey makes it clear that this action has also saved a large number of West African chimpanzees," says co-author Menladi Lormie, Max Planck researcher and FDA ecologist, of the President's decision.

This survey showed that in areas where primary rainforest was still abundant, hunting was the anthropogenic threat most frequently encountered, followed by logging, mining and non-timber forest product extraction. "This combination of large-scale habitat destruction and high hunting rates may seriously jeopardize the long-term survival of Liberia's wildlife populations", says Dr. Annika Hillers, co-author of the article and conservation scientist for The Royal Society for the Protection of Birds in the Gola Forests, Sierra Leone and Liberia. "With this study, we provide an accurate and comprehensive data-based platform for local wildlife protection authorities, policy-makers and international conservation agencies to inform effective conservation strategies to best protect what is left of this country's rich wildlife heritage". 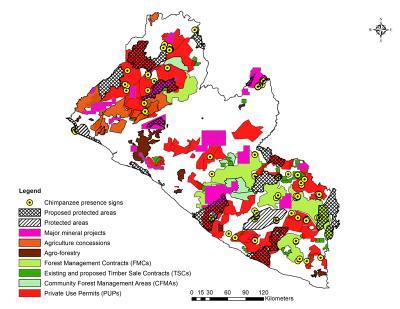