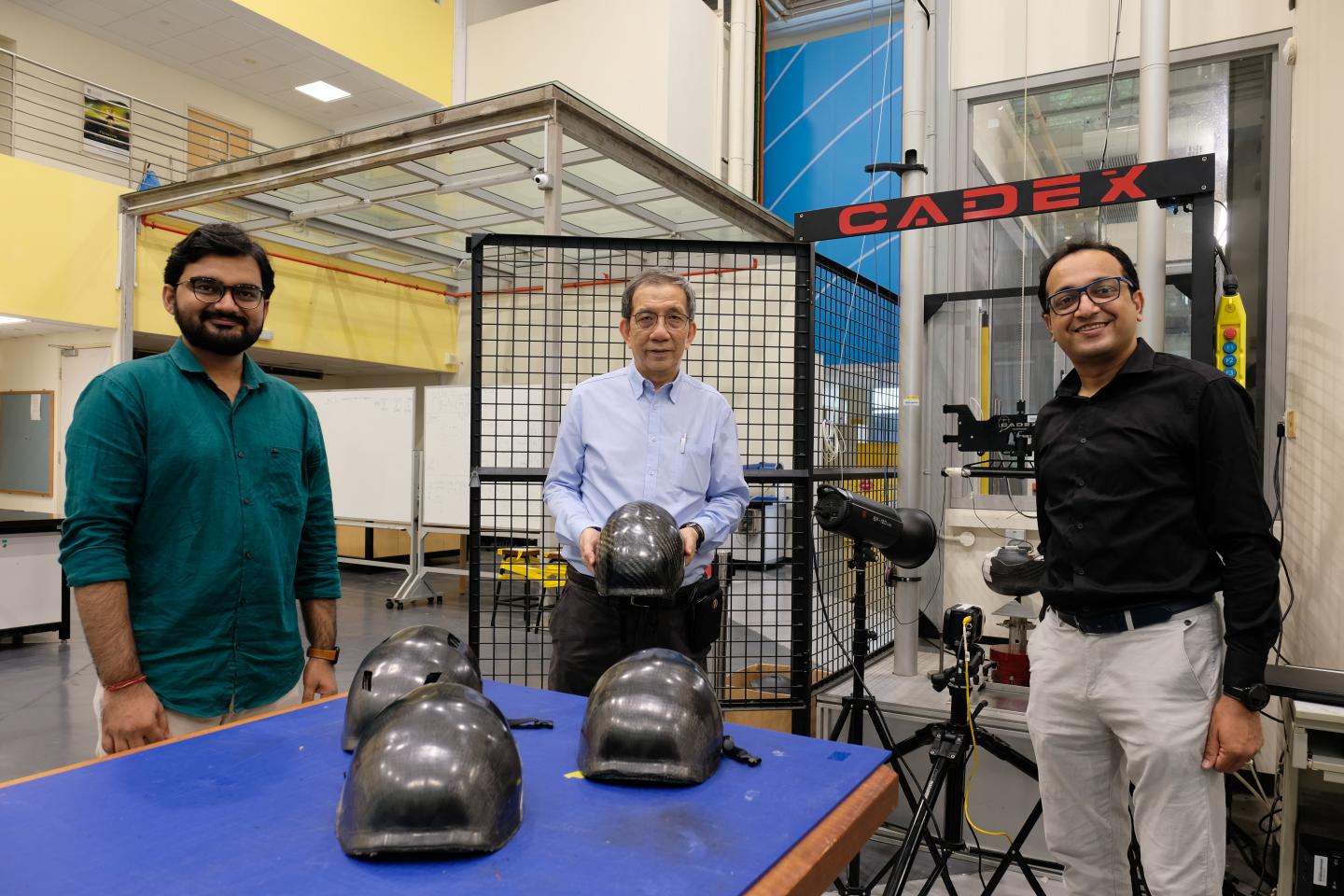 As cities worldwide expand their networks of cycling paths and more cyclists take to the streets, the chances of cycling accidents and potential collisions increase as well, underscoring the need for proper cycling safety in dense urban areas.

According to a World Health Organisation report in 2020, more than 60 per cent of the reported bicycle-related deaths and long-term disabilities are a result of accidents with head injuries.

Researchers from Nanyang Technological University, Singapore (NTU Singapore), in collaboration with French specialty materials leader Arkema, have developed a tougher, safer bicycle helmet using a combination of materials. The new helmet prototype has higher energy absorption, reducing the amount of energy transferred to a cyclist's head in the event of an accident and lowering the chances of serious injury.

The new thermoplastic resin, named Elium®, was developed by Arkema, one of NTU's industry partners. The NTU team worked with Arkema engineers to develop a moulding process for Elium® to manufacture stronger bicycle helmets.

"Our partnership with Arkema is driven by the desire to develop a new type of helmet that is stronger and safer for cyclists," said Assoc Prof Leong. "Helmets have been proven time and time again to play a critical role in reducing the severity of injuries and number of fatalities. Our prototype helmet has been subjected to a barrage of internationally benchmarked tests and has demonstrated the ability to provide greater protection for cyclists compared to conventional helmets."

The findings by the research team were published in the peer-reviewed journal Composites Part B: Engineering in May.

Bicycle helmets are made up of two components. The first is an outer shell, usually made from a mass-produced plastic like polycarbonate. Beneath it is a layer of expanded polystyrene foam - the same material used in product packaging and takeaway boxes.

The outer shell is designed to crack on impact in order to dissipate energy across the entire surface of the helmet. The foam layer then compresses and absorbs the bulk of impact energy so that less energy is transferred to the head.

This reinforcement makes the outer shell tougher, stiffer, and less brittle than a polycarbonate shell. It also increases the helmet's contact time, which is the total time of impact in which the helmet experiences impact load.

These properties allow the outer shell to absorb more impact energy over a longer period, while also dissipating it evenly throughout the helmet. This results in less overall force reaching the head, thereby reducing the chances of critical injury.

"When the helmet hits a surface at high speed, we noticed that there is a deformation along with the spread failure of the composite shell, which means the outer shell is taking more load and absorbing more energy," said Dr Somen. "This is what you really want - the more impact absorbed by the shell, the less of it that reaches the foam, and so there is less overall impact to the head. We found that in existing polycarbonate helmets, about 75 per cent of the energy is absorbed by the foam. This is not ideal as the foam is in direct contact with the human head."

In contrast, the team's composite helmet shell absorbed over 50 per cent of impact energy, leaving the foam to absorb much less energy at about 35 per cent.

Safety forged on the anvils of NTU

The researchers tested their helmets by driving them down at high speeds on three different types of anvils - flat, hemispherical (rounded), and curbstone (pyramid-shaped) - to simulate different road conditions.

The researchers paid particular attention to peak acceleration forces, which is a measure of how much force a helmet takes based on how fast it is moving at the point of impact. A helmet must have a peak acceleration of less than 300G (g-force) to be deemed fit for use under CPSC 1203, with lower g-force values being safer.

On two flat anvil tests, the researchers' helmets performed on par with a control polycarbonate helmet, producing results of 194.7G and 197.2G to the control's 195.4G and 198.2G.

On a single curbstone anvil test, the researchers' helmets recorded 111.7G, a notable improvement over the reference helmet that produced a result of 128.7G.

The researchers referred to the most widely used injury metric called the Head Injury Criterion (HIC) to calculate the probability of serious injury and fatality while using the helmet. HIC values are derived from a combination of peak acceleration values and the duration of acceleration.

The team's analysis of the flat anvil test results and the HIC showed that the composite helmet could potentially reduce critical and fatal injury rates from 28.7 per cent and 6 per cent to 16.7 per cent and 3 per cent respectively, compared to a polycarbonate helmet.

Even though peak acceleration was roughly equal between both types of helmets, the composite helmet's tougher outer shell led to longer duration of acceleration during impact. This allows the outer shell to absorb more energy, therefore generating a lower HIC which means a lower chance of critical and fatal injuries.

The prototype helmet is also easier to produce than a conventional helmet. Using Elium® instead of other conventional thermoplastics simplifies the composite helmet manufacturing process.

Elium® is liquid at ambient temperature, allowing it to be moulded at room temperature as opposed to other thermoplastic-based composite shells that require higher temperature processing.

The NTU researchers are working with Arkema to commercialise the helmet's manufacturing process, which would allow interested manufacturers to produce them. Assoc Prof Leong says that helmets produced through their method would offer the same protection of current top-tier helmets, but potentially at the price of mid-tier helmets ($100-$150).

The researchers are currently working on developing composite helmets made from Elium® and polypropylene fabric, which is another type of thermoplastic. This is to overcome the composite helmet's one current trade-off which is that they weigh about 20 per cent more than polycarbonate helmets.

Helmets made from Elium® and polypropylene fabric will potentially make them just as light as polycarbonate ones but offer better protection.