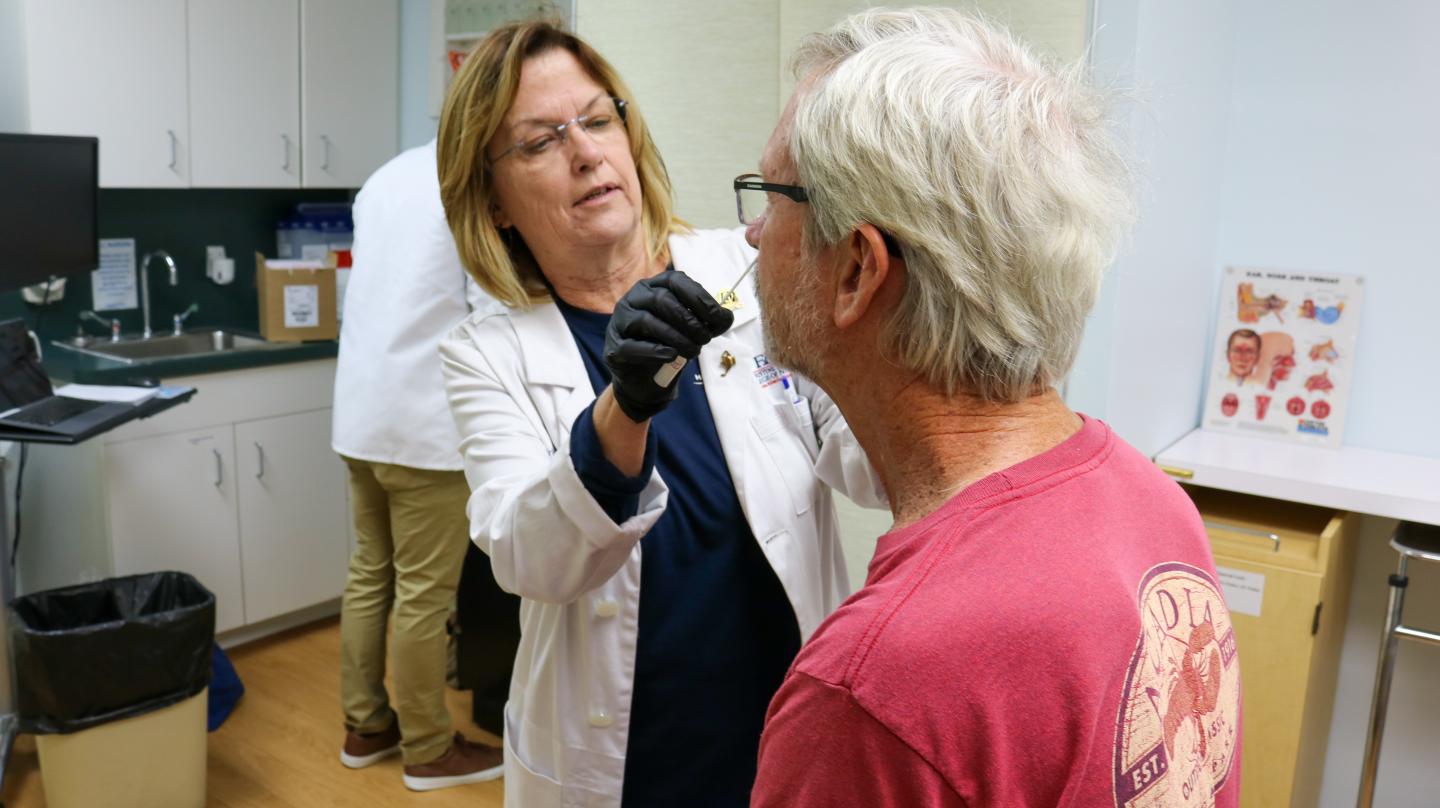 IMAGE: Nancy Harris, D.N.P., an assistant professor with FAU's Christine E. Lynn College of Nursing, collects a sample from the nasal mucosa of a study participant.

Researchers detected microcystin, the main class of cyanotoxins produced by blue-green algae species, in the nasal passages of 95 percent of the participants. Some of these individuals reported no direct contact with impacted water. Therefore, these findings may be due to the aerosolization of cyanobacteria and transport in the air as has previously been hypothesized.

"Aerosolized cyanotoxins represent an important potential route of exposure and should be included in risk assessments for human populations," said Adam Schaefer, M.P.H., lead author and an epidemiologist at FAU's Harbor Branch. "Our study represents an essential first step in assessing and mitigating the potentially harmful effects of cyanobacteria blooms. We have a lot of unanswered questions to address regarding absorption of toxins, the minimum safe distance for persons from blooms, and potential health effects of exposure."

The recently proposed limit of microcystins to minimize human health risks associated with direct contact with water through recreation and swimming was set at eight parts per billion by the United States Environmental Protection Agency. However, there are currently no limits specific to airborne concentrations of microcystins or inhalation guidelines.

Researchers also found higher concentrations among occupationally exposed individuals. The significantly higher nasal concentration among individuals whose job regularly brought them into contact with impacted bodies of water is an important finding. To date, little has been done to assess occupational exposure to blue-green algal blooms.

Study participants were recruited at public locations near Stuart, which is located at the mouth of the St. Lucie estuary downstream from Lake Okeechobee, between July 30 and Sept. 30, 2018. After completing a questionnaire, sterile cotton swabs were used to collect a sample from the nasal mucosa, which were analyzed for microcystin concentration. Concurrently, researchers collected and analyzed a total of 47 surface water samples, collected bi-weekly during that same timeframe. Environmental concentrations of microcystin in water samples were analyzed by sampling location and sampling week to correspond with human sampling locations and dates.

"Recent funding from the Florida Department of Health will allow us to expand this research to evaluate the potential long-term health effects of exposure to blue-green and red tide algae at multiple sites in the state," said Schaefer.

"Analysis of other tissues also is needed to establish inhalation as an important route of exposure and systemic absorption," said Sullivan. "This study is a critical step in our ongoing efforts of the Center for Coastal and Human Health to understand and protect against the potential human health effects of harmful algal blooms."