Using data from over 18,000 patients, scientists have identified more than two dozen genetic risk factors involved in Parkinson's disease, including six that had not been previously reported. The study, published in Nature Genetics, was partially funded by the National Institutes of Health (NIH) and led by scientists working in NIH laboratories.

"Unraveling the genetic underpinnings of Parkinson's is vital to understanding the multiple mechanisms involved in this complex disease, and hopefully, may one day lead to effective therapies," said Andrew Singleton, Ph.D., a scientist at the NIH's National Institute on Aging (NIA) and senior author of the study.

Dr. Singleton and his colleagues collected and combined data from existing genome-wide association studies (GWAS), which allow scientists to find common variants, or subtle differences, in the genetic codes of large groups of individuals. The combined data included approximately 13,708 Parkinson's disease cases and 95,282 controls, all of European ancestry.

The investigators identified potential genetic risk variants, which increase the chances that a person may develop Parkinson's disease. Their results suggested that the more variants a person has, the greater the risk, up to three times higher, for developing the disorder in some cases.

"The study brought together a large international group of investigators from both public and private institutions who were interested in sharing data to accelerate the discovery of genetic risk factors for Parkinson's disease," said Margaret Sutherland, Ph.D., a program director at the National Institute of Neurological Disorders and Stroke (NINDS), part of NIH. "The advantage of this collaborative approach is highlighted in the identification of pathways and gene networks that may significantly increase our understanding of Parkinson's disease." 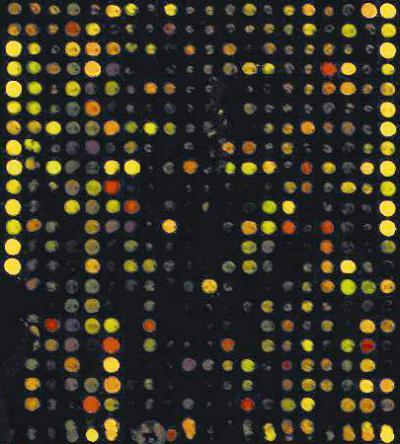 Scientists used gene chips to help discover new genes that may be involved with Parkinson's disease.

To obtain the data, the researchers collaborated with multiple public and private organizations, including the U.S. Department of Defense, the Michael J. Fox Foundation, 23andMe and many international investigators.

Affecting millions of people worldwide, Parkinson's disease is a degenerative disorder that causes movement problems, including trembling of the hands, arms, or legs, stiffness of limbs and trunk, slowed movements and problems with posture. Over time, patients may have difficulty walking, talking, or completing other simple tasks. Although nine genes have been shown to cause rare forms of Parkinson's disease, scientists continue to search for genetic risk factors to provide a complete genetic picture of the disorder.

The researchers confirmed the results in another sample of subjects, including 5,353 patients and 5,551 controls. By comparing the genetic regions to sequences on a state-of-the-art gene chip called NeuroX, the researchers confirmed that 24 variants represent genetic risk factors for Parkinson's disease, including six variants that had not been previously identified. The NeuroX gene chip contains the codes of approximately 24,000 common genetic variants thought to be associated with a broad spectrum of neurodegenerative disorders.

"The replication phase of the study demonstrates the utility of the NeuroX chip for unlocking the secrets of neurodegenerative disorders," said Dr. Sutherland. "The power of these high tech, data-driven genomic methods allows scientists to find the needle in the haystack that may ultimately lead to new treatments."

Some of the newly identified genetic risk factors are thought to be involved with Gaucher's disease, regulating inflammation and the nerve cell chemical messenger dopamine as well as alpha-synuclein, a protein that has been shown to accumulate in the brains of some cases of Parkinson's disease. Further research is needed to determine the roles of the variants identified in this study.