The first exploratory study, published in Current Issues in Education, followed a group of middle school students diagnosed with ADHD who meditated twice a day in school. After 3 months, researchers found over 50% reductions in stress, anxiety, and ADHD symptoms. During the study, a video was made of some students discussing what it felt like to have ADHD, and how those experiences changed after 3 months of regular TM practice.

The study was conducted over a period of 6 months in an independent school for children with language-based learning disabilities in Washington, DC. The study showed improved brain functioning, increased brain processing, and improved language-based skills among ADHD students practicing the Transcendental Meditation technique.

A local TV news station reported on the study in-progress during the first 3 months. 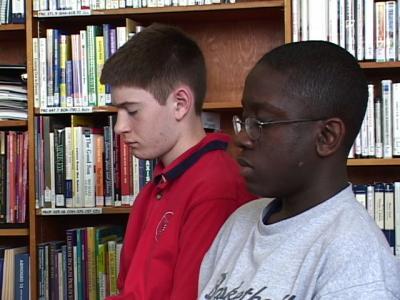 Students with ADHD practiced Transcendental Meditation 10 minutes twice a day at school during a study to measure brain functioning and cognitive development.

Students were pretested, randomly assigned to TM or delayed-start comparison groups, and post-tested at 3- and 6-months. Delayed-start students learned TM after the 3-month post-test.

In addition, students were administered a verbal fluency test. This test measured higher-order executive functions, including initiation, simultaneous processing, and systematic retrieval of knowledge. Performance on this task depends on several fundamental cognitive components, including vocabulary knowledge, spelling, and attention.

Using EEG measurements, the relationship of theta brain waves to beta brain waves can be diagnostic of ADHD. Dr. Joel Lubar of the University of Tennessee has demonstrated that the theta/beta ratio can very accurately identify students with ADHD from those without it.

While theta EEG around 4-5 Hz is commonly associated with daydreaming, drowsiness, and unfocused mental states, theta EEG around 6-8 Hz is seen when one focuses on inner mental tasks, such as memory processing, identifying, and associating.

And when beta activity, which is associated with focus, is lower than normal," Travis added, "it affects the ability to concentrate on task for extended periods of time." 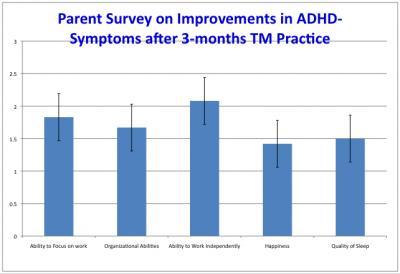 At the end of the research, the parents completed a questionnaire to assess their perceptions of changes in five ADHD-related symptoms in their children from the beginning to the end of the study. There were positive and statistically significant improvements in the five areas measured: a) Ability to focus on schoolwork, b) Organizational abilities, c) Ability to work independently, d) Happiness, and e) Quality of sleep.

"Prior research shows ADHD children have slower brain development and a reduced ability to cope with stress," said Dr. Stixrud. "Virtually everyone finds it difficult to pay attention, organize themselves and get things done when they're under stress," he explained. "Stress interferes with the ability to learn—it shuts down the brain. Functions such as attention, memory, organization, and integration are compromised."

Why the TM Technique

"We chose the TM technique for this study because studies show that it increases brain function. We wanted to know if it would have a similar effect in the case of ADHD, and if it did, would that also improve the symptoms of ADHD," said Dr. Grosswald.

Dr. Stixrud added, "Because stress significantly compromises attention and all of the key executive functions such as inhibition, working memory, organization, and mental flexibility, it made sense that a technique that can reduce a child's level of stress should also improve his or her cognitive functioning."

The Transcendental Meditation technique is an effortless, easy-to-learn practice, unique among categories of meditation. "TM does not require concentration, controlling the mind or disciplined focus—challenges for anyone with ADHD," Grosswald added.

There is substantial research showing the effectiveness of the TM technique for reducing stress and anxiety, and improving cognitive functioning among the general population. "What's significant about these new findings," Grosswald said, "is that among children who have difficulty with focus and attention, we see the same results. The fact that these children are able to do TM, and do it easily, shows us that this technique may be particularly well-suited for children with ADHD."

With regular practice, this restfully alert brain state, characteristic of the TM technique, becomes more present outside of meditation, allowing ADHD students to attend to tasks. "In a sense," Dr. Travis said, "the repeated experience of the Transcendental Meditation technique trains the brain to function in a style opposite to that of ADHD."

During the practice of the Transcendental Meditation technique, coherence is found across different EEG frequencies. After meditation, the brain utilizes this increased functioning ability to support the performance of a task in an integrated manner.

During the first 3 months of the study, the theta/beta ratios of the control group (delayed start) actually increased. After learning, and practicing TM for 3 months, this group experienced dramatic decreases in theta/beta ratios and increased verbal fluency as well.

Students reported that the TM technique was enjoyable and easy to do. They felt calmer, less stressed, and better able to concentrate on their schoolwork. They also said they were happier since they started TM. This correlated with reports from the parents.

At the end of the research, the parents completed a questionnaire to assess their perceptions of changes in five ADHD-related symptoms in their children from the beginning to the end of the study. There were positive and statistically significant improvements in the five areas measured: a) Ability to focus on schoolwork, b) Organizational abilities, c) Ability to work independently, d) Happiness, and e) Quality of sleep.

"While stimulant medication is very beneficial for some of my clients with ADHD," Stixrud added, "the number of children who receive great benefit from medicine with minimal side-effects is relatively small. The fact that TM appears to improve attention and executive functions, and significantly reduces stress with no negative side-effects, is clearly very promising." Stixrud said he hoped these findings would lead to more research on the use of TM with children and adolescents.

In conclusion, these findings warrant additional research to assess the impact of Transcendental Meditation practice as a non-drug treatment for ADHD, and to track meditating students' improved academic achievements. 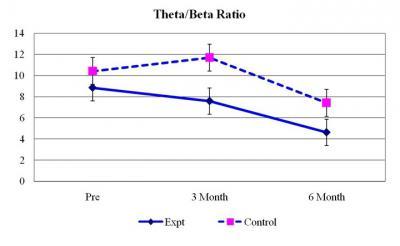