NEW YORK – The Government of Bangladesh recently declared three new wildlife sanctuaries for endangered freshwater dolphins in the world's largest mangrove ecosystem – the Sundarbans, according to the Wildlife Conservation Society (WCS) whose conservation work helped pinpoint the locations of the protected areas.

The sanctuaries, which were officially declared on January 29, will protect the last two remaining species of freshwater dolphins in Asia: the Ganges River dolphin and the Irrawaddy dolphin. Although there is no global population estimate for either species, both have disappeared from major portions of their range. However, both species occur in the Sundarbans in sufficient numbers, which may serve as a global safety net for preventing their extinction

The three wildlife sanctuaries safeguard 19.4 mi (31.4 km) of channels with a total area of 4.1 sq mi (10.7 sq km). The locations and sizes of the sanctuaries in the Sundarbans were determined according to a study conducted by WCS and Bangladesh Forest Department and published in the journal Oryx in 2010. The study found that the habitat of Ganges River and Irrawaddy dolphins were clumped in waterways where human activities are most intense.

"Declaration of these Wildlife Sanctuaries is an essential first step in protecting Ganges River and Irrawaddy dolphins in Bangladesh," said Brian D. Smith, Director of the WCS's Asian Freshwater and Coastal Cetacean Program, and first author of the study. "As biological indicators of ecosystem-level impacts, freshwater dolphins can inform adaptive human-wildlife management to cope with climate change suggesting a broader potential for conservation and sustainable development."

Dr. Tapan Kumar Dey, Conservator of Forests, Wildlife, Forest Department, Bangladesh, said: "A critical component will be to engage local human communities. The wildlife sanctuaries will be used as a natural laboratory for developing management practices that balance wildlife conservation with the resource demands of a large and growing human population."

The dolphins are threatened by fatal entanglements in fishing gear, depletion of their prey from the enormous by-catch of fish and crustaceans in fine-mesh "mosquito" nets used to catch fry for shrimp farming, and increasing salinity and sedimentation caused by sea-level rise and changes in the availability of upstream freshwater flow.

News of the declared sanctuaries is particularly welcome considering the recent extinction of the Yangtze River dolphin whose last confirmed sighting was in 2002. Fatal entanglement in nets and habitat degradation killed off this species after having survived in the Yangtze River of China for more than 10 million years.

Freshwater dolphins are among the most threatened wildlife on earth because their habitat is highly impacted by human activities, including dam construction and unsustainable fisheries. In addition to conserving globally important populations of freshwater dolphins, the new wildlife sanctuaries in the Sundarbans will provide protection for other threatened aquatic wildlife including the river terrapin, masked finfoot, and small-clawed otter.

Bangladesh has been recognized as a "hotspot" for cetaceans, the scientific grouping of dolphins, whales, and porpoises. In April 2009, the Wildlife Conservation Society announced the discovery of the world's largest population of nearly 6,000 Irrawaddy dolphins in the country. A portion of this population shares habitat with the endangered Ganges River dolphin, whose range extends all the way upstream to the shadow of the Himalayas in Nepal.

Starting on February 18, 2012, WCS, through its Bangladesh Cetacean Diversity Project, will bring a boat-based dolphin exhibition called the "Shushuk Mela" to local communities bordering the Sundarbans mangrove forest. This month-long traveling exhibition will raise awareness about the new wildlife sanctuaries and engage local fishermen and other community members in discussions on adaptive management needed to ensure human-dolphin coexistence. 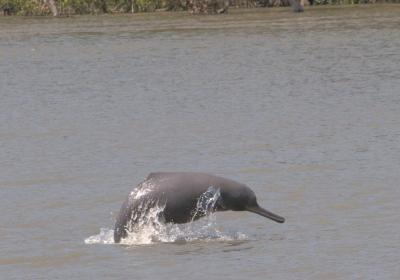 Ganges River dolphins will be protected in three new wildlife sanctuaries recently declared by the government of Bangladesh.