Scientists have created a material which turns fluorescent if there are molecules from explosives in the vicinity. The discovery could improve e.g. airport security - and also it gives us an insight into a rather chaotic micro-world where molecules and atoms constantly are responding to their surroundings.

Unlike humans, dogs' noses are so sensitive that they can smell explosives in the vicinity. They can detect single molecules in the air, and thus they may be valuable helpers when it comes to detecting explosives.

Inspired by such talents, science is devoting many resources on developing electronic or chemical "noses" which similarly can detect explosives molecules and thus warn that explosives may be hiding in the vicinity. 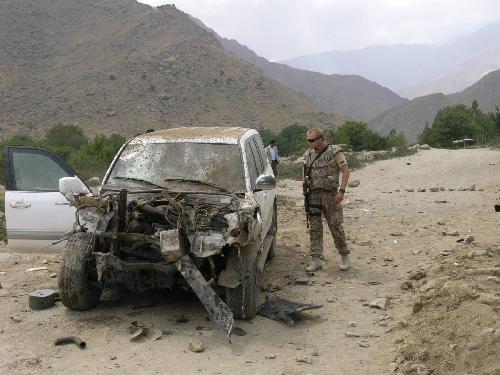 Researchers from University of Southern Denmark now report the creation of a new material, consisting of a set of molecules which react when encountering explosives molecules in their vicinity. The set consists of the molecules TTF-C[4]P and TNDCF.

TNDCF has the special talent that it becomes fluorescent when an explosives molecule is introduced to the set of molecules.

A detector devise based on molecules

"This new knowledge could lead to creating a small device based on this set of molecules. With such a device security staff in airports could e.g. test if there are explosives molecules on or near a bag", explains Steffen Bähring.

Bähring is first author of a scientific paper on the subject, published in the journal Chemistry - A European Journal.

The journal has selected the paper as "hot paper", because it is based on important, thorough and convincing scientific work. The article will also appear on the cover of the journal.

Not all techniques are fully reliable

This is not the first time scientists report the development of chemical substances capable of detecting explosives. But previously many uncertainties have been involved, and therefore the methods have not been entirely reliable.

One problem is that previous techniques have been based on a substance that became fluorescent when there were no explosives molecules in the vicinity and that the fluorescence disappeared if the substance came into contact with explosive molecules.

"The problem was that several factors could make the fluorescence disappear; a number of salts for example had this effect. Thus these substances could give off a false alarm", explains Bähring.

The new material only turns fluorescent when exposed to molecules form the explosive TNB and some specific salts, such as those based on chlorine or fluorine.

"There can only be two reasons why it turns fluorescent, one of them being the presence of explosives. Thus this material is a highly reliable tool for detecting explosives", explains Bähring.

Molecules held together by weak bonds are easily influenced

His new material consists of molecules held together by weak bonds. Weakly bonded molecules form substances that can easily switch form - just like water can be found in both liquid, solid or gaseous form - and compared to strongly bonded molecules they are very easily influenced by their surroundings.

"Life as we know it would not be able to exist if there were no weakly bonded molecules", says Bähring.

Weakly bonded molecules constantly respond to their environment, e.g. changes in temperature. This makes them very difficult to control. It also makes them extra difficult to work with, and creating new molecular architectures based on them is no easy task.

Because of this understanding, controlling weakly bonded molecules is a huge scientific challenge.

"It is extremely hard to create a chain of different weakly bonded molecules. If a scientist one day succeeds in putting just ten different types of molecules together in this way, it would be a great achievement", says Bähring.

In the paper, he and his colleagues describe the composition of up to eight molecules forming a long chain.