The scientists named the new species discovered on the side of a mountain road near Oaxaca, Mexico, after the Mexican-American singer as a nod to her efforts to preserve indigenous culture and penchant for wearing colorful, local costumes as part of her performances.

"It was primarily Paolo's idea to name the grasshopper after the singer" said Derek Woller, one of the authors of the paper referring to colleague Paolo Fontana. "He's a big fan of Lila Downs (her stage name). The grasshopper is so beautiful, so vibrant and colorful. When he told us all about her, her work, her colorful clothes, and that she was born in the region where we found the specimens, we thought, yeah, that's great, let's do it."

The grasshopper measures about an inch long on average and resembles a fiery rainbow with blue, red, yellow, orange and black markings. The first pictures of the new species make their debut in an article in this month's Zootaxa journal. http://www.mapress.com/zootaxa/2014/f/zt03793p495.pdf

Woller, Fontana, Ricardo Mariño-Pérez and Hojun Song are the authors of the paper. Woller is a Ph.D. candidate and Mariño-Pérez is a Ph.D. student in Biology Professor Song's lab while Fontana is a researcher at the Edmund Mach Foundation in Pergine Valsugana, Italy.

The men were doing fieldwork for another grasshopper study in a pine-oak forest of the Sierra Madre del Sur Mountain Range in Oaxaca, Mexico, when they came across their discovery in 2011.

"We were surprised that a grasshopper of that size and found next to the road wasn't discovered before," Mariño-Pérez said.

The team did some research, returned again in 2013 to see if they could find more grasshoppers and then submitted their work to the journal after confirming three known small populations of the creatures. 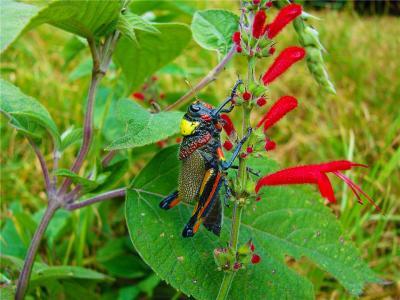 This is the newly discovered female of the species named after Grammy winner Lila Downs.

There are about 9,700 known species of grasshoppers in the world. UCF houses many examples in its Bug Closet, which now also contains the Lila Downs friar grasshopper.

Locals called the creature the friar grasshopper because its head looks a bit like what a monk with his hood pulled back might look like. In Spanish "friale" means friar. That's why the full scientific name of the grasshopper is Liladownsia fraile.

For the UCF team, it was important to recognize Mexico in naming the species. Downs is known for her contributions to the music industry through her traditional fashion, which is primarily based on Mexico's indigenous communities, cultures and heritages. Her music has earned her a Grammy Award and two Latin Grammy Awards. She's active with various humanitarian causes especially those related to Latin America's indigenous communities. But most young music fans may recognize her because she was a featured artist on Carlos Santana's "Corazon" album with Gloria Estefan, Ziggy Marley, Wayne Shorter and others released earlier this year.

"This taxon is dedicated to (Lila Downs) for a number of reasons, such as the fact that she was born in the vicinity of the type locality and because she incorporates several indigenous tongues from Mexico into her musical style, including Mixteco and Zapoteco (the latter of which is spoken in the type locality). Additionally, Lila Downs has not only promoted the vast cultural diversity of Mexico worldwide via her music, but also through the use of bright colors, a staple of Mexican culture, and considering that this new genus is brightly colored, we would like to recognize her efforts through the dedication of this new genus."

Mariño-Pérez said the discovery of the grasshopper is an important reminder to all of us to be mindful of the way we use our planet.

"We are in a era of biodiversity crisis," he said. "Every day species are disappearing, in some cases even before being discovered. This discovery is a reminder that new species are not only in the middle of the Amazon or in the deep forests of Africa but also next to the road in a more or less populated area."

To assist in supporting the conservation cause, this unique grasshopper species has been placed on the International Union for Conservation of Nature's new Red List of threatened species. 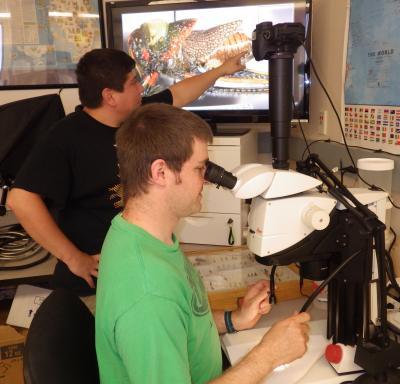 Ricardo Marino-Perez and Derk A. Woller view a grasshopper under the microscope.