New general concept for the treatment of cancer

A team of researchers from five Swedish universities, led by Karolinska Institutet and the Science for Life Laboratory, have identified a new way of treating cancer. The concept is presented in the journal Nature and is based on inhibiting a specific enzyme called MTH1, which cancer cells, unlike normal cells, require for survival. Without this enzyme, oxidized nucleotides are incorporated into DNA, resulting in lethal DNA double-strand breaks in cancer cells.

"To accelerate the development of this treatment principle and to proceed with clinical trials in patients as quickly as possible, we are working with an open innovation model. Even before publication, we have sent out MTH1 inhibitors to a range of research groups worldwide", says Thomas Helleday, holder of the Söderberg Professorship at Karolinska Institutet, who heads the study.

In recent decades, the development of new anticancer agents has focused on targeting specific genetic defects in cancer cells. These are often effective initially, but are troubled with rapid resistance emerging. In the current study, the researchers present a general enzymatic activity that all cancers tested rely on and that seems to be independent of the genetic changes found in specific cancers. The research team shows that all the investigated cancer tumours need the MTH1 enzyme to survive. In this way, cancer cells differ from normal cells, which do not need this enzyme.

"The concept is built on that cancer cells have an altered metabolism, resulting in oxidation of nucleotide building blocks", says Thomas Helleday."MTH1 sanitises the oxidized building blocks, preventing the oxidative stress to be incorporated into DNA and becoming DNA damage. This allows replication in cancer cells so they can divide and multiply. With an MTH1 inhibitor, the enzyme is blocked and damaged nucleotides enter DNA, causing damage and kill cancer cells. Normal cells do not need MTH1 as they have regulated metabolism preventing damage of nucleotide building blocks. Finding a general enzymatic activity required only for cancer cells to survive opens up a whole new way of treating cancer," 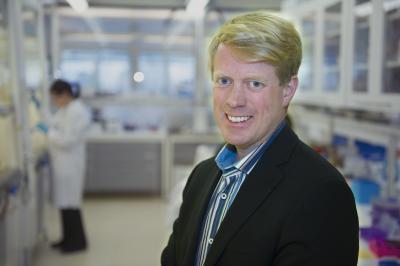 Dr. Thomas Helleday of Karolinska Institutet and his colleagues have identified a new way of treating cancer by inhibiting the enzyme MTH1, which cancer cells require for survival.

To take the treatment concept to towards a clinical application, the scientists have taken a multidisciplinary collaboration strategy with researchers from five Swedish universities. They have produced a potent MTH1 inhibitor that selectively kills cancer cells in the tumours that have been surgically removed from skin cancer patients. Dr Roger Olofsson Bagge is a surgeon at Sahlgrenska University Hospital, and also affiliated with the Sahlgrenska Academy at the University of Gothenburg:

"When we saw that the tumour from one of my melanoma patients who has developed resistance to all the current treatment actually responded very well to the treatment, we were extremely happy. It's rare that you get to experience and witness such a breakthrough," he says.

However, a lot of work remains to be done before it is time for clinical trials, which is likely to take at least one or two years, according to Thomas Helleday. In another article published in the same issue of Nature parts of the Swedish research team, together with collaborators in Austria and the UK present results showing that even previously identified substances that kill cancer cells work by inhibiting the MTH1 enzyme, something which has not been realised until now.

"That existing anticancer agents hit the MTH1 shows that the concept really works. Now that we understand the mechanism, we can develop very selective inhibitors", says Thomas Helleday.