Cambridge, Mass. – July 30, 2012 – Biofilms may no longer have any solid ground upon which to stand.

A team of Harvard scientists has developed a slick way to prevent the troublesome bacterial communities from ever forming on a surface. Biofilms stick to just about everything, from copper pipes to steel ship hulls to glass catheters. The slimy coatings are more than just a nuisance, resulting in decreased energy efficiency, contamination of water and food supplies, and—especially in medical settings—persistent infections. Even cavities in teeth are the unwelcome result of bacterial colonies.

In a study published in the Proceedings of the National Academy of Sciences (PNAS), lead coauthors Joanna Aizenberg, Alexander Epstein, and Tak-Sing Wong coated solid surfaces with an immobilized liquid film to trick the bacteria into thinking they had nowhere to attach and grow. 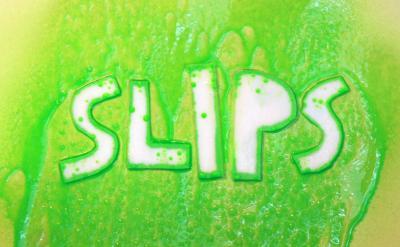 The word "SLIPS" is coated with the SLIPS technology to show its ability to repel liquids and solids and even prevent ice or frost from forming. The slippery discovery has now been shown to prevent more than 99 percent of harmful bacterial slime from forming on surfaces.

"People have tried all sorts of things to deter biofilm build-up—textured surfaces, chemical coatings, and antibiotics, for example," says Aizenberg, Amy Smith Berylson Professor of Materials Science at the Harvard School of Engineering and Applied Sciences (SEAS) and a Core Faculty Member at the Wyss Institute for Biologically Inspired Engineering at Harvard. "In all those cases, the solutions are short-lived at best. The surface treatments wear off, become covered with dirt, or the bacteria even deposit their own coatings on top of the coating intended to prevent them. In the end, bacteria manage to settle and grow on just about any solid surface we can come up with."

Taking a completely different approach, the researchers used their recently developed technology, dubbed SLIPS (Slippery-Liquid-Infused Porous Surfaces) to effectively create a hybrid surface that is smooth and slippery due to the liquid layer that is immobilized on it. 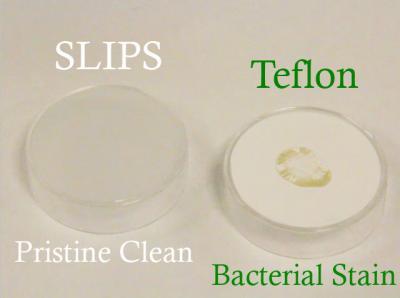 This shows the SLIPS technology for preventing biofilm formation as compared to a Teflon coated surface.

First described in the September 22, 2011, issue of the journal Nature, the super-slippery surfaces have been shown to repel both water- and oil-based liquids and even prevent ice or frost from forming.

"By creating a liquid-infused structured surface, we deprive bacteria of the static interface they need to get a grip and grow together into biofilms," says Epstein, a recent Ph.D. graduate who worked in Aizenberg's lab at the time of the study.

"In essence, we turned a once bacteria-friendly solid surface into a liquid one. As a result, biofilms cannot cling to the material, and even if they do form, they easily 'slip' off under mild flow conditions," adds Wong, a researcher at SEAS and a Croucher Foundation Postdoctoral Fellow at the Wyss Institute.

Aizenberg and her collaborators reported that SLIPS reduced by 96% the formation of three of the most notorious, disease-causing biofilms—Pseudomonas aeruginosa, Escherichia coli, and Staphylococcus aureus—over a 7-day period.

The technology works in both a static environment and under flow, or natural conditions, making it ideally suited for coating implanted medical devices that interact with bodily fluids. The coated surfaces can also combat bacterial growth in environments with extreme pH levels, intense ultraviolet light, and high salinity.

SLIPS is also nontoxic, readily scalable, and—most importantly—self-cleaning, needing nothing more than gravity or a gentle flow of liquid to stay unsoiled. As previously demonstrated with a wide variety of liquids and solids, including blood, oil, and ice, everything seems to slip off surfaces treated with the technology.

To date, this may be the first successful test of a nontoxic synthetic surface that can almost completely prevent the formation of biofilms over an extended period of time. The approach may find application in medical, industrial, and consumer products and settings.

In future studies, the researchers aim to better understand the mechanisms involved in preventing biofilms. In particular, they are interested in whether any bacteria transiently attach to the interface and then slip off, if they just float above the surface, or if any individuals can remain loosely attached.

"Biofilms have been amazing at outsmarting us. And even when we can attack them, we often make the situation worse with toxins or chemicals. With some very cool, nature-inspired design tricks we are excited about the possibility that biofilms may have finally met their match," concludes Aizenberg. 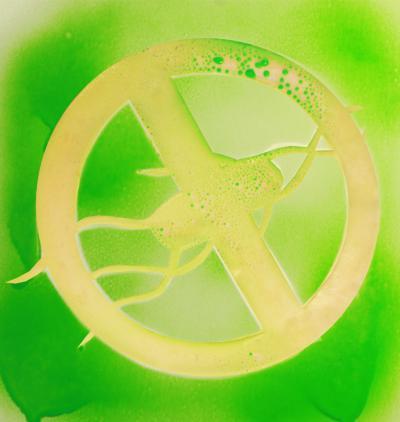 By tricking bacteria into thinking they have nowhere to attach and grow, researchers have developed a remarkable way to deter harmful biofilm growth on surfaces.