Population-level studies have indicated that insufficient sleep increases the risk of cardiovascular diseases and type 2 diabetes. These diseases are known to be linked to inflammatory responses in the body.

University of Helsinki researchers have now shown what kinds of biological mechanisms related to sleep loss affect the immune system and trigger an inflammatory response. They identified the genes which are most susceptible to sleep deprivation and examined whether these genes are involved in the regulation of the immune system. The study was published in the journal PLOS ONE on 23 October 2013.

Conducted at the sleep laboratory of the Finnish Institute of Occupational Health, the study restricted the amount of sleep of a group of healthy young men to four hours per night for five days, imitating the schedule of a normal working week. Blood samples were taken before and after the sleep deprivation test. White blood cells were isolated from the samples, and the expression of all genes at the time of the sampling was examined using microarrays. The results were compared with samples from healthy men of comparable age who had been sleeping eight hours per night for the week.

"We compared the gene expression before and after the sleep deprivation period, and focused on the genes whose behaviour was most strongly altered," explains researcher Vilma Aho. "The expression of many genes and gene pathways related to the functions of the immune system was increased during the sleep deprivation. There was an increase in activity of B cells which are responsible for producing antigens that contribute to the body's defensive reactions, but also to allergic reactions and asthma. This may explain the previous observations of increased asthmatic symptoms in a state of sleep deprivation."

The amount of certain interleukins, or signalling molecules which promote inflammation, increased, as did the amount of associated receptors such as Toll-like receptors (TLR). On the gene level, this was apparent in the higher-than-normal expression of the TLR4 gene after sleep loss. CRP level was also elevated, indicating inflammation. 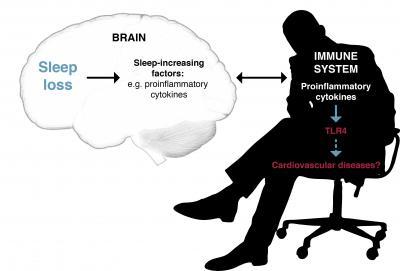 Sleep loss causes changes to the system that regulates our immune defence. Some of these changes appear to be long-term, and may contribute to the development of cardiovascular diseases and type 2 diabetes.

The researchers also wanted to examine the impact that long-term sleep deprivation could have on the immune system. For this follow-up study, they used material from the national FINRISKI health survey. Participants in this population study underwent blood tests but also answered questions about their health, for example whether they were getting enough sleep.

The researchers compared participants who believed they were sleeping sufficiently with those who felt that they were not sleeping enough. Some of the gene-level changes observed in the experimental working week sleep restriction study were repeated in the population sample. These results may help explain the connection between shorter sleep and the development of inflammatory diseases, such as cardiovascular disease and diabetes, which has been established in epidemiological studies.

"These results corroborate the idea that sleep does not only impact brain function, but also interacts with our immune system and metabolism. Sleep loss causes changes to the system that regulates our immune defence. Some of these changes appear to be long-term, and may contribute to the development of diseases that have been linked to sleep deprivation in epidemiological research," Aho states. 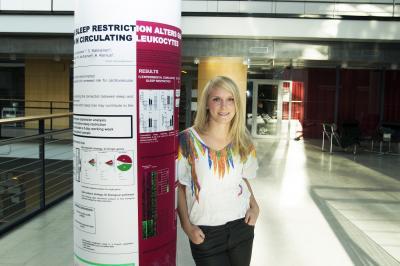 "Our results corroborate the idea that sleep does not only impact brain function, but also interacts with our immune system and metabolism", researcher Vilma Aho states.