Augusta, Ga. – Nearly half of patients with the most common form of adult leukemia are said to have normal chromosomes but appear instead to have a distinct pattern of genetic abnormalities that could better define their prognosis and treatment, researchers report.

"This is a total game changer," Kolhe said. "We have to use more sensitive tests to give patients the proper answer."

"The technology we currently use can't identify specifically what's wrong," Kolhe said. Patients have high percentages of cancer-producing cells called blasts in their blood and bone marrow but they do not show the distinctive chromosomal alterations that typically help characterize the leukemia and strategize therapy. 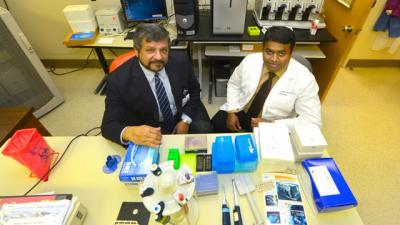 Pictured are Dr. Amyn Rojiani, Chairman of the MCG Department of Pathology (left) and Dr. Ravindra Kolhe, molecular pathologist at the Medical College of Georgia at Georgia Regents University.

Genetic abnormalities, inherited and/or caused by environmental exposures – including previous chemotherapy and radiation treatment – are thought to cause leukemia. The result is that a disproportionate number of stem cells get stuck in the blast, or cancerous, stage, rather than maturing to white blood cells that actually fight cancer and other invaders.

Patients often feel tired and feverish and blood tests reveal high blast levels. Pathologists then take about 20 leukemia cells, chemically block their constant division, open the nucleus, and spread the chromosomes on a slide. They examine the chromosomes with a microscope and in-situ hybridization technology, which helps detect small deletions or rearrangements.

"(Cytogenetically normal patients) show a normal chromosomal picture but they are clearly sick," Kolhe said. Frustrated at being unable to give these patients better information, he partnered with California-based Affymetrix to look directly at the genes within chromosomes using CytoScanHD microarray technology.

When he put cell contents instead on a computer chip with 2.7 million genetic probes, small, previously undetectable changes in the DNA became apparent in patients who had been classified as cytogenetically normal. In fact, every patient who looked normal under the microscope showed a consistent pattern. "It's the same finding in all 22 patients," Kolhe said.

He's continuing to collect patient data and is replicating the same genetic defects in mice to confirm that they cause leukemia.

Microarray technology is a research tool now finding a clinical presence. In January, Affymetrix received approval from the Food and Drug Administration to use its CytoScan® DX Assay to help diagnose developmental and intellectual disabilities in children.

Starting this summer, the Georgia Esoteric, Molecular Labs LLC at MCG will use this state-of-the-art technology to identify genetic disorders in children, while continuing to advance understanding of similar applications in cancer, said Dr. Amyn Rojiani, Chairman of the MCG Department of Pathology.