A new analytical model for e-sports developed by researchers in Sweden, Denmark and Germany, not only helps game developers better understand how players perform, but can also predict the outcome of the game.

E-sports is the term used for the increasingly popular phenomenon of competitive computer and video gaming, where individuals or teams play against each other in various online environments. The game has millions of active players around the world that play tournaments and compete for prestigious prizes. In addition, games broadcasted live over the Internet and on TV attract millions of viewers.

The new model - which was applied to the game Defense of the Ancients (DOTA) - can be used to generate detailed statistics about the players' performances, and even analyse how individual confrontations between players affect the outcome of a game. Based on the players' behaviour, game developers can gain insight into recurring patterns in their performance, and discover ways to improve the game. 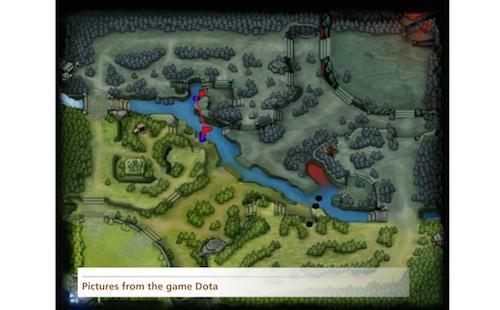 The game Defense of the Ancients (DOTA) was used to help develop a new analytical e-sports model, which can be used to generate detailed statistics about the players' performances. Credit: Lund University

"The model provides analysts with ways to better communicate to their audience what's happening in a game. Sometimes the game moves so quickly that it is hard to see exactly what's happening", says co-researcher and cognitive scientist Tobias Mahlmann from Lund University in Sweden.

The fact that the games take place in a digital environment means that there is an opportunity to obtain significantly more detailed statistics about a game than in, for instance, a real life football game.

The model, developed by a team of researchers from Lund University in Sweden, Aalborg University in Denmark and Ludwig-Maximilians Universität in Germany, utilises this opportunity, and can help gamers and developers dig deep into the data, and generate an even more comprehensive picture.

"The opportunity to be able to analyse games in depth and evaluate tactics is interesting to analysts and game developers, but also to the players themselves", says Tobias Mahlmann.