New research pinpoints which of the world's trees are climate-ready 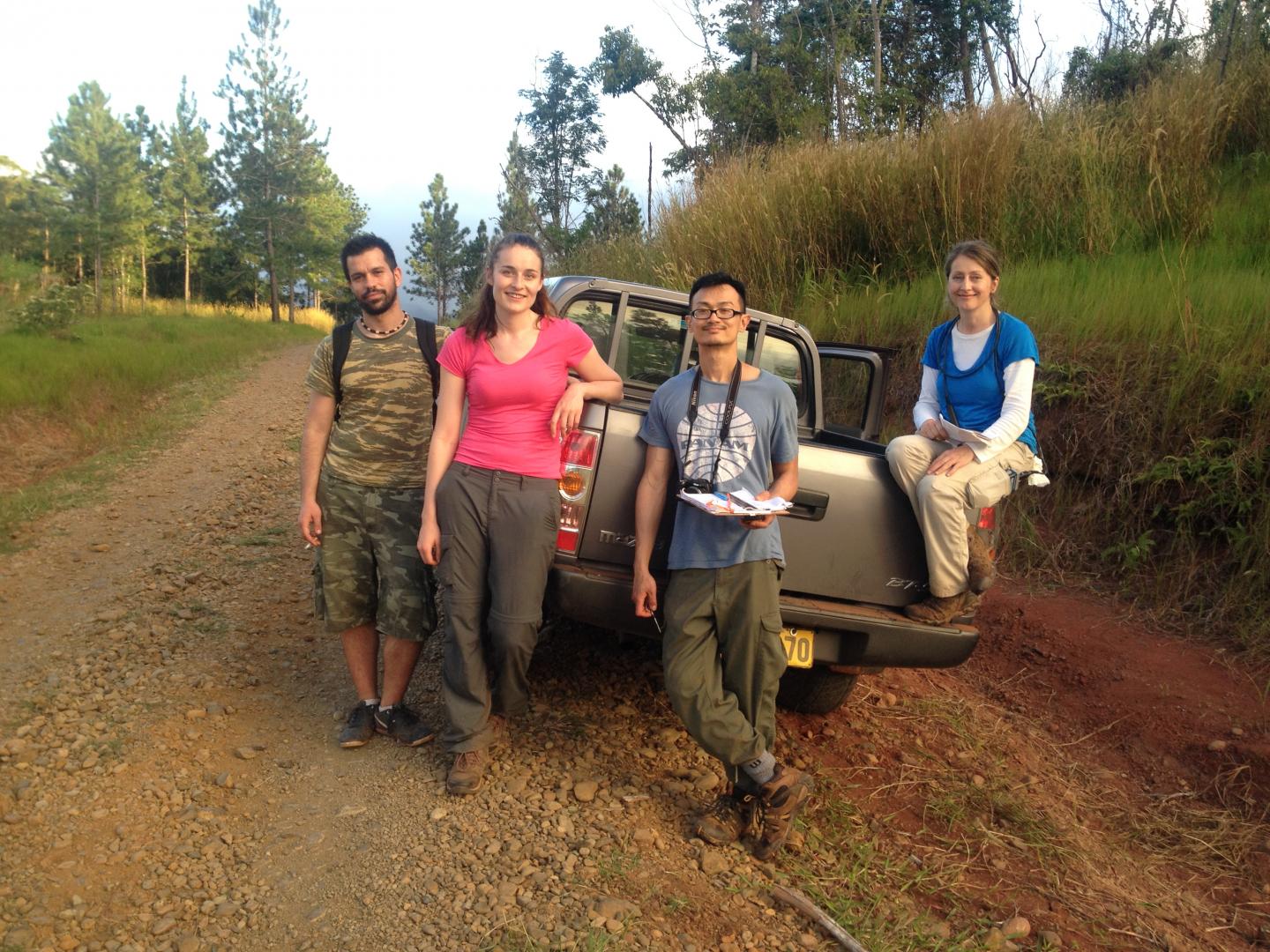 IMAGE: Dr Soh with part of the research team in Seaqaqa, Fiji. The research took them all over the globe.

Botanists from Trinity College Dublin have discovered that "penny-pinching" evergreen species such as Christmas favourites, holly and ivy, are more climate-ready in the face of warming temperatures than deciduous "big-spending" water consumers like birch and oak. As such, they are more likely to prosper in the near future - with this pattern set to be felt more strongly in cooler climates, such as Ireland's.

Theory predicts that rising global carbon dioxide (CO2) concentrations in our atmosphere will make the world's trees grow in a more water-efficient way but, until now, few studies have tested these predictions. The Trinity team's research shows that atmospheric CO2 rise over the last 25 years has already had a demonstrable impact on the water use of forests, making them more water-wise. However, not all tree species behave in the same way.

Professor of Botany at Trinity, Jennifer McElwain, led the research that has just been published in leading international journal, Science Advances. The lead author of the paper, a Research Fellow in Botany at Trinity, Dr Wuu Kuang Soh, said:

"Remarkably, we found that with rising CO2, evergreen trees and shrubs are more efficient in using water than deciduous plants in cooler climate locations, but there is no evidence for such a pattern in parts of the world with warmer climates."

"As well as offering a fresh insight our results allow us to make some concrete predictions on how future modification of our atmosphere and climate will impact the world's forests. Our results suggest that evergreen trees and shrubs will benefit more than deciduous plants in a higher CO2 future, particularly in parts of the globe that have generally cooler climates, like Ireland and in other countries in the temperate latitudes."

Gardeners are well aware that water is a precious commodity for all plants. Water is essential for healthy growth and development and plants will soon desiccate and die without it. In the wild however, where plants do not receive daily water from a caring gardener, species compete for it and all other essential resources like light, nutrients and space.

The team's results therefore imply that the evergreen woody species - because they are more water-wise - will have a distinct ecological advantage over their deciduous neighbours if atmospheric CO2 concentrations continue to rise. During times of water scarcity - such as in droughts that are increasing in frequency and duration due to climate change - this predicted advantage should be even greater.

This newly discovered impact of recent global climate change on evergreen and deciduous plants becomes more apparent as we travel from the warmer to cooler zones of the planet.

To unearth this trend, the team embarked on a five-year research programme funded by Science Foundation Ireland. The team analysed museum leaf specimens collected in the late 1980s and compared them with leaves from the same species collected 25 to 30 years later from the same geographic locations.

Additionally, the team conducted fieldwork expeditions to explore trees and shrubs from the warm tropical and desert landscapes of Fiji, Puerto Rico and Arizona to the cold temperate and boreal forests of Alaska. This meant they could track woody plant responses to anthropogenic climate change over time (30 years) and across space.

The discovery has a wider importance as the results can now be used to feed into climate models to reflect as much as possible the situation of real plant and vegetation responses to climate change on the ground.

"For cooler climates like Ireland's we should be really looking at how rising CO2 affects our forest ecosystems in the context of evergreen and deciduous tree types. For example, evergreen climbers like ivy, and trees like Holly - two of our iconic Christmas plants - may outcompete deciduous trees such as birch and oak if water becomes an even more precious recourse in the future. This is perhaps something that future gardeners, foresters and urban landscape architects should consider."

"The reason for the detected differences in the evergreen and deciduous plant responses to climate change lies in their leaf texture. The leaves of evergreens are generally thicker and sturdier than deciduous plants in cooler climates, while they are mostly similar in texture between the two groups in the warmer climates."

"Because leaf texture affects plant sensitivity to rising CO2 and because the evergreen and deciduous leaf habits are an important hallmark that define forest type, their differential behavior to rising CO2 will have a profound impact on the land carbon and water cycles today and in the very near future."

One way of testing the prediction that evergreen woody species may have a competitive edge in the future is to look back through geological history at times when the CO2 concentration in the atmosphere was much higher than it is today.

Fifty million years ago, in the Eocene, palaeo-botanists unearthed far more evergreen leaves than deciduous leaves, particularly across much of ancient Europe. It has until now puzzled scientists as to why this was the case. But, based on the new results, the team believes we can now conclude that there were more evergreen species in the Earths warmer past because evergreens are more water-wise in high CO2 conditions.

The next step is to study these patterns at a species level as the botanists want to use their incredible 30-year data set to identify the most climate-ready trees for future forests.