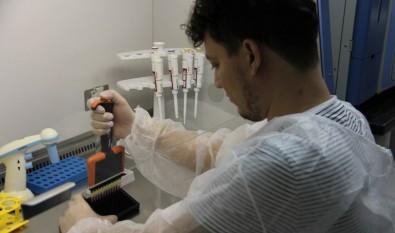 IMAGE: The discovery paves the way to the development of drugs capable of making ESCs regress to the earliest stage of development.

Embryonic stem cells (ESCs) can give rise to many different types of tissues and organs. At the turn of the present century, these cells were believed to offer hope of treatment for several health problems, but as research advanced, scientists realized that understanding and controlling the behavior of ESCs would be a more daunting challenge than initially imagined.

Studies showed that any given population of ESCs could be very heterogeneous and that their potential pluripotency, or capacity to differentiate into other cell types, could vary both among cells from the same embryo and from one lineage to another. Later, it was discovered that the levels of certain microRNAs inside cells changed as differentiation progressed. MicroRNAs, or miRNAs, are small RNA molecules that do not encode proteins but perform a regulatory role in several intracellular processes.

Researchers at the Center for Cell-Based Therapy (CTC) in Ribeirão Preto, São Paulo State, have now investigated the functioning of 31 miRNAs observed in human ESCs and identified signaling pathways involved in both pluripotency and differentiation. The discovery opens up new perspectives for research in the area.

The study was supported by São Paulo Research Foundation - FAPESP, and the results are published in Stem Cell Research & Therapy. CTC is a Research, Innovation and Dissemination Center (RIDC) funded by FAPESP and hosted by the University of São Paulo (USP).

"Based on this information, we can think about developing drugs to facilitate the cultivation of ESCs in the laboratory and even make them regress to the earliest development stage, called naive. Their capacity to originate any type of tissue is greater at that stage," said Rodrigo Alexandre Panepucci (https://bv.fapesp.br/en/pesquisador/57383/rodrigo-alexandre-panepucci/), a researcher at the Ribeirão Preto Blood Center and principal investigator of the study.

According to Panepucci, the human ESCs used in scientific research are usually in the intermediate development stage of primed pluripotency, when they have not yet differentiated but are primed, i.e., a step closer to assuming a distinct cell identity. At this stage, they are less versatile than mouse ESCs, which are typically isolated when the cells are naive and hence widely used as a research model.

"Interest in working with the naive phenotype is strong because naive cells are able to originate even gametes [egg cells and sperm]. Primed cells aren't," Panepucci said.

MiRNAs have complementary nucleotide sequences, so they can bind to messenger RNAs and break them down or prevent their translation into proteins. An increase in a cell's miRNA expression, therefore, means that a process is being inhibited. Identifying the process is no trivial task, however.

"A single miRNA may be able to bind to hundreds or thousands of messenger RNAs. This may affect several targets of a signaling pathway and have a wide-ranging biological effect," Panepucci explained.

Studying these molecules from a functional standpoint requires bioinformatics tools capable of processing massive quantities of data. The CTC group chose high-content screening (HCS), an automated fluorescence microscopy technique, analyzing thousands of images to find out how the miRNAs regulated the ESC phenotypes.

The ESCs were cultured in 96-well plates, with a different synthetic miRNA in each plate. After culture for three to four?days, automated image acquisition and analysis were performed to evaluate the effects on pluripotency maintenance and differentiation.

"We used fluorescence microscopy to obtain thousands of images of the cells. Based on our analysis of this material, we established multiparameter phenotype profiles to determine the pluripotency stage of the cells and the effects of the miRNAs. From hundreds of morphological parameters observed in the images, we selected approximately ten that enabled us to classify the differentiation stage of the ESCs," Panepucci said.

The researchers also measured, in each well, the level of two proteins found to be pluripotency markers, OCT4 and cyclin B1. The more these molecules are expressed, the greater the cell's pluripotency.

The miRNAs that produced similar effects in ESCs were then grouped and hierarchized using a clustering technique that enabled the researchers to organize the large volume of data obtained from the analysis and identify the signaling pathway with which each group of miRNAs was involved.

"We selected miR-363-3p for more detailed study because it clearly contributed to pluripotency maintenance," Panepucci said. "We showed that it inhibits differentiation by degrading the messenger RNA that encodes the protein NOTCH1."

According to Panepucci, compounds that inhibit the NOTCH1-mediated signaling pathway could become tools to modulate ESC pluripotency and even make these cells regress to the naive stage in which high levels of OCT4 and other pluripotency factors are present.

"An understanding of these pluripotency regulation mechanisms can take research on ESCs to a new level, as well as research on iPSCs [induced pluripotent stem cells obtained from adult patient cells modified in the laboratory], on which the future of cellular therapy depends," Panepucci said.

He added that iPSCs offer the advantage of containing the same DNA as the patient to be treated. Moreover, because they are derived from adult cells rather than embryos, their use in medicine is not affected by ethical constraints. "All the same, ESCs are the best model for studying pluripotency," he said.