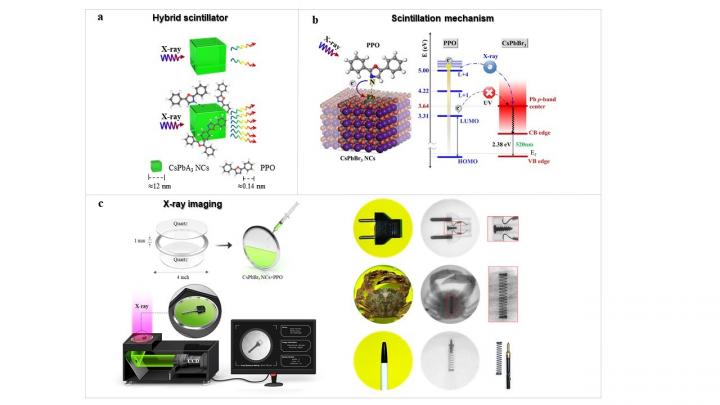 IMAGE: a, Schematic illustration of the RL of a CsPbA3 NC and a CsPbA3 NC hybridized with PPO. b, The schematic diagram describing the mechanism of hybridized CsPbBr3 NC with PPO....

X-ray detection is becoming increasingly important in areas from daily life for industry, the military, and scientific research. The process of scintillation materials is converting the X-ray, gamma-ray, and particle radiation into visible or ultraviolet (UV) light. Among the properties of the scintillator, the large scale, stability, and quantum yield for uses in various fields from low to high energy are key performance indicators. However, the conventional scintillators such as CsI, Gd2O2S, and organic scintillators (PPO+POPOP) are hardly manufactured to various forms from flexible plastic, solid to liquid for specific tasks. Additionally, there seems to be no practical way to considerably enhance the scintillation efficiency (quantum yield) of the existing scintillators. Hence, there has been a strong demand for developing a new kind of scintillator materials which can be widely exploited in various fields.

In a new paper published in Light Science & Application, a team of scientists, led by Professors Hyunsik Im, Hyungsang Kim and Jungwon Kwak from Division of Physics and Semiconductor Science, Dongguk University and Department of Radiation Oncology, Asan Medical Center, Korea and co-workers have developed perovskite metal halide nanocrystals based hybrid materials with high quantum yields for detecting X-rays efficiently and high-resolution X-ray imaging. Using the hybrid nanomaterial scintillators, they designed a scalable and cost-effective X-ray detector panel in liquid form. The hybrid nanomaterial scintillator works under X-ray irradiation typically employed in both diagnosis and treatment. More interestingly, the hybrid scintillator has a faster scintillation decay process over the conventional scintillators, which is beneficial for digital motion X-ray. The reported method and scintillation mechanism will be extended to enhance the quantum yield of various types of scintillators, enabling low-dose radiation detection in various fields including fundamental science and imaging.

The highly-efficient X-ray scintillation of the hybrid nanomaterial scintillator is based on a new scintillation mechanism, i.e., X-ray photon-induced charge transfer from the organic molecule to the perovskite nanocrystal (NC). The charge transfer can be allowed via surface hybridization of the NC with the organic molecule, and the extra charges in the NC, which are generated and transferred from the organic molecule further amplify the number of energetic electrons in the NC, thereby significantly improving quantum yield. These scientists summarize the working mechanism of their hybrid nanomaterial scintillators:
"We devise a method to enhance the X-ray scintillation efficiency (quantum yield) in perovskite metal halide NCs for efficiently detecting X-rays and high-resolution X-ray imaging. The enhancement of the scintillation efficiency of the NCs is achieved by hybridizing the NCs with organic molecules that provide X-ray induced energetic electrons to the NCs."

"Since the hybrid nanomaterials can be shaped into any form ranging plastic, solid to liquid, their use and applicability will be diverse in various fields. In addition, their scintillation decay time is remarkably faster than those of conventional scintillators, making them to be exploited for digital motion X-ray. " they added.

"While the fundamentals of scintillation in these halide perovskite NCs+PPO hybrid nanomaterials require further elucidation, these hybrid nanocrystals hold substantial promise for advancing the industrial applications of X-ray sensing and producing intriguing scintillation in hybrid nanomaterials. The presented method can also be applicable to develop efficient photo-sensors in various fields." the scientists forecast.