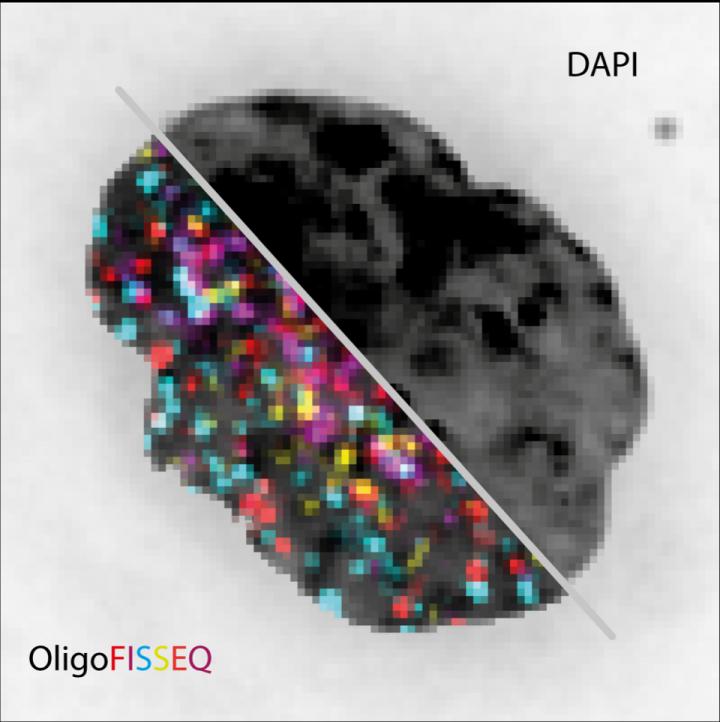 IMAGE: Pictures is the same cell nucleus visualised with conventional fluorescence image (DAPI) compared to with OligoFISSEQ for a 129 different loci.

Researchers from Harvard University, the Centro Nacional de Análisis Genómico (CNAG) and the Centre for Genomic Regulation (CRG), describe the first technology able to visualize hundreds to potentially thousands of genomes at the same time under the microscope. The tech images genomes more cheaply, more quickly and increases range of visibility compared to currently available methods. The technique is described in Nature Methods.

Each human cell has two metres of genome condensed down into 10 microns within the cell nucleus. This blueprint of life folds to help genes make physical contact with other genes that may be located quite a distance away along the chromosome. This three-dimensional organisation is crucial for cell function, but its complexity and constant dynamism make it incredibly difficult to visualize. Imaging more than a handful of genes at the same time has been impossible, limiting researchers' ability to characterize how genomes function.

One of the most common ways of studying the genome is by using fluorescence in situ hybridization (FISH), which uses fluorescent probes to mark the presence or absence of specific DNA sequences on chromosomes. Scientists have made landmark discoveries such as how cells divide thanks to FISH, and still use it this day for medical applications or species identification, amongst other applications.

First developed in the 1980s, FISH is an ageing technology that can only visualise a handful of genes at the same time. Since then, new methods have been created that can image genomes at a high resolution, but map a very limited number of regions or chromosomes at a time.

Today authors of a a new study in Nature Methods describe OligoFISSEQ, a technology using new computational methods that overcomes these limitations. They used it to create three-dimensional maps of 66 genomic targets across six chromosomes in hundreds of cells, showcasing OligoFISSEQ's potential to visualize the entire genome at a molecular resolution out of reach until now.

"Up to this moment, seeing a large number of different genes at the same time under the microscope was impossible," says Marc A. Marti-Renom, co-lead author of the study and ICREA Professor at CNAG-CRG. "We combined existing sequencing technologies in a smart way so that we can see hundreds of genes by sequencing their targets under the microscope. Before OligoFISSEQ, reaching this number of genes at the same time was slow and expensive. It is like upgrading from a dial-up phoneline to fibre-optic internet and paying 40 times less for it."

The researchers also tested OligoFISSEQ by mapping all of the 46 regions along the length of the human X chromosome. The higher resolution of the technology revealed new patterns in the way the genome organizes itself, including that the length of the chromosome's arm is not correlated with its angle. The researchers hypothesise this may be indicative of cell type, cell state or cellular health or age.

"The resolution offered by OligoFISSEQ has huge potential to shed new light on patterns we could not see before", concludes Marti-Renom. "Because of the coverage it provides to study the genome, it is well suited for spotting what may seem like a minor, seemingly inconsequential change in one part of the nucleus that may have a 'butterfly effect' elsewhere. What may have previously have been thought of as random may turn out to be anything but. That is the power of this tool."