New fungus found to cause cankers and declines in pistachio trees in Sicily, Italy 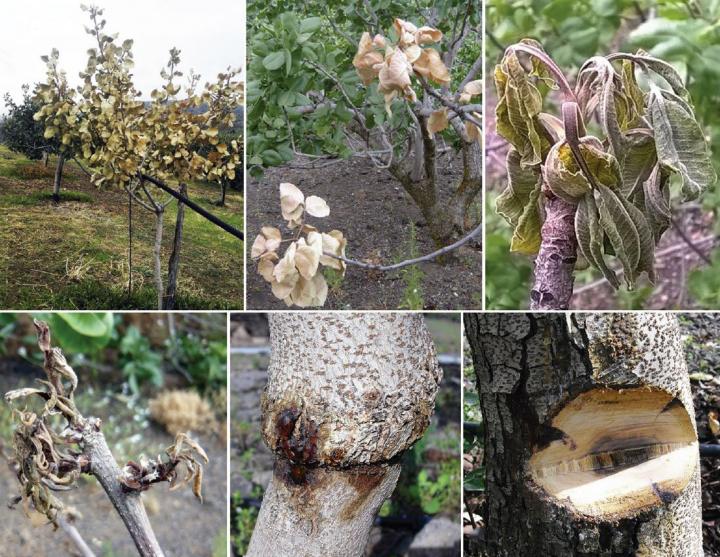 IMAGE: Symptoms caused by the newly described pathogenic fungus observed in the field.

Starting in the spring of 2010, farmers from Sicily - the major pistachio production area of Italy - have been reporting a previously unknown disease on the trees. Characterised by cankers and declines, it sometimes leads to the collapse of the entire plant.

When the research team led by Salvatore Vitale, Centro di Ricerca Difesa e Certificazione, Italy, studied plants from a total of 15 pistachio orchards in Catania, Agrigento and Caltanissetta provinces, they identified cankers associated with vascular necrosis and tree decline on twigs, branches and stems, alongside abundant gummosis. There were also localised, sunken lesions with several central cracks. These lesions would deepen into the woody tissue, where discolouration and necrotic tissue were also present.

Additionally, the scientists conducted a series of pathogenicity tests on 5-year-old potted pistachio plants (Pistacia vera), which successfully reproduced the field observations. As a result, a previously unknown pathogenic fungus, which colonises the woody plant tissue, has been isolated.

The aetiology of the disease and the description of the new species, named Liberomyces pistaciae, are published in the open access journal MycoKeys. Despite cankers and subsequent decline of pistachio trees having been observed in Sicily for several years, the paper is the first work to successfully determine the causal agent.

"On the basis of the high disease incidence and the frequency of this species observed in several orchards in the last years, we believe that L. pistaciae represents amenace to pistachio production in Sicily," say the researchers.

Out of the 15 surveyed orchards, the scientists detected the presence of the fungus in ten of them. Most of the observations occurred in the winter period and during late spring, but the authors found the pathogen in asymptomatic trees as well, which suggests that the fungus has a dormant growth phase.

When already symptomatic, the plants begin to exudate gum. Often, the bark on their trunks and/or branches would scale, appearing as if cracking and peeling. The initial pale circular areas present in the bark turn dark and sunken with time. Later, the infected patches were seen to expand in all directions, yet faster along the main axis of the stems, branches and twigs. When the scientists examined beneath the bark, they saw discoloured and necrotic tissues. Once the trunk of the tree is encircled by a canker, they report, the whole plant collapses.

Other symptoms include canopy decline as well as wilting and dying inflorescences and shoots growing from infected branches or twigs.

The newly described fungus is characterised with slowly growing colonies. With time, they turn from white to pale to dark brown with a whitish slightly lobed margin.

The researchers warn that essential hazard for the further spread and promotion of the infection is the use and distribution of infected propagation material taken from nurseries and mechanical injuries or pruning wounds.