New clues to origins of mysterious atmospheric waves in Antarctica 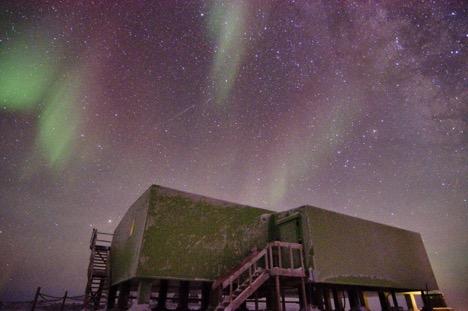 Two years after a CIRES and CU Boulder team discovered a previously unknown class of waves rippling continuously through the upper Antarctic atmosphere, they've uncovered tantalizing clues to the waves' origins. The interdisciplinary science team's work to understand the formation of "persistent gravity waves" promises to help researchers better understand connections between the layers of Earth's atmosphere--helping form a more complete understanding of air circulation around the world.

"A big picture of Antarctic gravity waves from the surface all the way to the thermosphere is emerging from the studies, which may help advance global atmospheric models," said CIRES Fellow and CU Boulder Professor of Aerospace Engineering Sciences Xinzhao Chu, lead author of the new study published today in the Journal of Geophysical Research - Atmospheres.

"The new understanding results from a series of journal publications, based on multiple years of lidar observations, many made by winter-over students, from Arrival Heights near McMurdo Station in Antarctica."

In the 2016 paper, Chu and her colleagues discovered persistent gravity waves: huge ripples that sweep through the upper atmosphere in 3- to 10-hour periods. And now, by combining observations, theory, and models, they propose two possible origins of those waves: they are either from lower-level waves breaking and re-exciting new waves higher in the sky, and/or from polar vortex winds.

Since 2016, the team managed to track the origin of the upper atmospheric waves down to the lower-altitude stratosphere. The team then characterized the dominant gravity waves there, but found they had very different properties than the persistent waves in the upper atmosphere.

"The upper-atmosphere waves are huge, with a horizontal length of around 1,200 miles (2,000 km), and the lower, stratospheric waves are much smaller--only 250 miles (400 km)," said Jian Zhao, a Ph.D. candidate in CU Aerospace, working in Chu's group, who stayed the 2015 winter over at McMurdo for lidar observations.

Zhao and colleagues previously described the stratospheric waves in an earlier study, and he is second author on the new study which describes how the wave energy varies over seasons and years--documenting those kinds of variations is critical for researchers trying to understand how the waves influence things like global air circulation and climate change.

The team suspects that when these lower, smaller-scale stratospheric gravity waves break, they trigger the formation of the huge waves that then travel to the upper atmosphere through a process called "secondary wave generation."

Evidence from lidar data at McMurdo station pointing to this process was described in a paper published this year, led by Sharon Vadas, a researcher from Northwest Research Associates, and colleagues.

"It's similar to ocean waves breaking on a beach," said Vadas. "When the wind flows downslope from the mountains near McMurdo, the excited mountain waves travel upward in the atmosphere, growing larger and larger until they break over huge scales, creating these secondary gravity waves."

Understanding the origins of the waves relied on Vadas' theory of secondary gravity waves and a global, high-resolution model created by Erich Becker at the Leibniz Institute of Physics in Germany. Becker's model perfectly stitches together the theory and lidar observations. It suggests that secondary wave formation is particularly persistent during winter, and that it occurs not only at McMurdo Station, but at mid to high latitudes in both hemispheres.

Another possible source of the persistent waves is the polar vortex--a persistent pattern of wind and weather that rotates around the South Pole during winter, Chu and her colleagues reported in the latest paper.

"The fast vortex winds could either modify the waves as they move upward, or the winds could actually generate waves themselves," said Lynn Harvey, a coauthor on the study, and researcher at the Laboratory for Atmospheric and Space Physics (LASP) at CU Boulder. "With more observations, we should be able to determine which scenario is true."

Chu and her research colleagues sometimes find themselves sitting at desks running computer models and calculations, and sometimes they are bundled head-to-toe, walking through strong winds and frigid temperatures well-below zero degrees F in Antarctica to run cutting edge lidar systems installed there.

The National Science Foundation-managed U.S. Antarctic Program and the Antarctica New Zealand program have supported the team's work in Antarctica for eight years, starting with the installation of Chu's custom-built lidar systems, which allows her team to probe the most difficult-to-observe regions of the atmosphere. Studying atmospheric waves near the South Pole is critical to improving climate and weather models, and forming a better picture of global atmospheric behavior.

"We still have many unanswered questions," said Chu. "But in about five years, using a combination of observations and high-resolution modelling, we hope to resolve these mysteries."

Two of her students--recent graduate Ian P. Geraghty and Ph.D. student Zimu Li--will travel to Antarctica this October to continue the research.