Neurological underpinnings of schizophrenia just as complex as the disorder itself

CHAPEL HILL, NC - Schizophrenia, a severe mental disorder affecting about one in 100 people, is notoriously difficult to diagnose and treat, in large part because it manifests differently in different people. A new study published today in Molecular Neuropsychiatry helps explain why. Researchers at the University of North Carolina School of Medicine have created a map that shows how specific schizophrenia symptoms are linked to distinct brain circuits.

The findings add to a growing body of evidence that schizophrenia is not a single disease but a complex constellation of neural circuit problems. The study also reinforces the potential value of brain scans for identifying and understanding schizophrenia in individual patients, for finding promising new therapeutic approaches, and for helping clinicians track a patient's progress during therapy.

"For a long time, we've thought of brain imaging studies as mainly a way to corroborate or confirm aspects of brain function and pathology that we had already identified from studying a patient's behavior," said Aysenil Belger, PhD, professor of psychiatry and psychology at UNC and the study's senior author. "This approach, where we use brain imaging to dissect the specific neural pathways of complex syndromes, is very novel and important. The imaging can help us distinguish between the different brain networks that contribute to distinct sub-symptoms. These distinctions are not recognizable from behavioral observations alone." 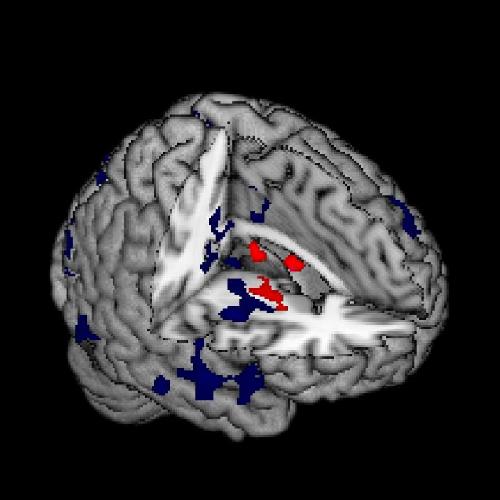 Belger, the director of the UNC Neurocognition and Imaging Research Laboratory, and recent UNC graduate student Joseph Shaffer, PhD, compared brain scans from more than 100 people with schizophrenia against brain scans from people with no psychiatric diagnoses. The scans were acquired as part of a large multi-site national collaborative research project, the Biomedical Informatics Research Network. Researchers imaged participants during a non-invasive test in which subjects were asked to listen to simple tones and detect changes in pitch.

The analysis revealed that people with schizophrenia showed markedly less brain activity during detection of the tonal changes as compared to the control group, a difference that became more apparent as symptoms worsened.

The study's most novel and striking findings emerged when researchers analyzed patterns of brain activity in patients with different types of schizophrenia symptoms. They focused on schizophrenia's so-called "negative" symptoms, such as problems with speech, blunted emotions, lack of motivation, and an inability to experience pleasure. ("Positive" symptoms include delusions, thought disorders, and hallucinations.) Negative symptoms are the hardest to treat with available medications and can make it difficult to hold a job or form relationships.

A close analysis of the brain scans revealed vastly different neural circuitry behind problems that seem similar on the surface. While a clinician may find it difficult to parse whether a patient's stilted conversational manner is rooted in a lack of emotional connection or problems forming words, a brain scan in Belger's study made it clear, for example, that particular symptoms were more closely associated with disruption in the brain's emotional processing areas, whereas other symptoms were more closely associated with regions responsible for language and motor control.

Parsing these complex symptoms could help inform new treatment approaches for schizophrenia and other disorders. "Many of these sub-symptoms are seen in other neuropsychiatric disorders, as well. Therefore, finding the neurological pathway or developing a treatment for that specific symptom could help to address multiple disorders," Belger said.

Also, the findings could help improve the tools available for early detection of risk for schizophrenia and psychosis, which are typically not diagnosed until late adolescence. If clinicians could use brain scans to identify vulnerable high-risk individuals in early adolescence when the brain is still developing, it may be possible to curb the development of the disorder and help prevent its most debilitating effects. Belger also indicated that such "high-risk" mapping studies are currently being conducted at the University of North Carolina in collaboration with Diana Perkins, MD, and collaborators at multiple institutions across the country under the North American Prodrome Longitudinal Study (NAPLS).