During the Neolithic Age (approximately 10000 BCE), early man evolved from hunter-gatherer to farmer and agriculturalist, living in larger, permanent settlements with a variety of domesticated animals and plant life. This transition brought about significant changes in terms of the economy, architecture, man's relationship to the environment, and more.

Now Dr. Ran Barkai of Tel Aviv University's Department of Archaeology and Ancient Near Eastern Civilizations has shed new light on this milestone in human evolution, demonstrating a direct connection between the development of an agricultural society and the development of woodworking tools.

"Intensive woodworking and tree-felling was a phenomenon that only appeared with the onset of the major changes in human life, including the transition to agriculture and permanent villages," says Dr. Barkai, whose research was published in the journal PLoS One. Prior to the Neolithic period, there is no evidence of tools that were powerful enough to cut and carve wood, let alone fell trees. But new archaeological evidence suggests that as the Neolithic age progressed, sophisticated carpentry developed alongside agriculture.

The use of functional tools in relation to woodworking over the course of the Neolithic period has not been studied in detail until now. Through their work at the archaeological site of Motza, a neighbourhood in the Judean Hills, Dr. Barkai and his fellow researchers, Prof. Rick Yerkes of Ohio State University and Dr. Hamudi Khalaily of the Israel Antiquity Authority, have unearthed evidence that increasing sophistication in terms of carpentry tools corresponds with increased agriculture and permanent settlements.

The early part of the Neolithic age is divided into two distinct eras — Pre-Pottery Neolithic A (PPNA) and Pre-Pottery Neolithic B (PPNB). Agriculture and domesticated plants and animals appear only in PPNB, so the transition between these two periods is a watershed moment in human history. And these changes can be tracked in the woodworking tools which belong to each period, says Dr. Barkai. 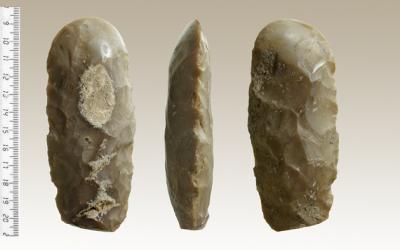 This is a polished axe from the Neolithic Period.

Within PPNA, humans remained gatherers but lived in more permanent settlements for the first time, he says. Axes associated with this period are small and delicate, used for light carpentry but not suited for felling trees or other massive woodworking tasks. In PPNB, the tools have evolved to much larger and heavier axes, formed by a technique called polishing. The researchers' in-depth analysis of these tools shows that they were used to cut down trees and complete various building projects.

Whether the transition to an agricultural society led to the development of major carpentry tools or vice versa remains to be determined, says Dr. Barkai, who characterizes it as a "circular argument." Whatever the answer, the parallel changes led to a revolution in lifestyle.

Beyond the change from a hunter-gatherer to an agricultural economy, a new form of architecture also emerged. Not only did people begin to live in permanent villages, but the buildings in which they lived literally took a different shape. The round and oval structures of earlier domiciles were replaced by rectangular structures in PPNB, explains Dr. Barkai. "Evidence tells that us that for each home, approximately 10 wooden beams were needed. Prior to this, there were no homes with wooden beams." In addition, humans began to produce limestone-based plaster floors for their homes — which also represented a growing use of wood, since plaster is manufactured by heating limestone.

These architectural developments, along with building pens and fences for domesticated animals, also necessitated the felling of trees in large quantities.