What was a tropical storm rapidly intensified into Typhoon Usagi within 24 hours as it moves through the Northwestern Pacific Ocean. NASA satellite data revealed a 20-mile-wide eye and bands of thunderstorms spiraling into the center of the monster storm.

The MODIS instrument, or Moderate Resolution Imaging Spectroradiometer aboard NASA's Terra satellite captured an amazing image of Typhoon Usagi on Sept. 19 at 02:25 UTC moving near the Philippines. The image showed spiraling bands of thunderstorms wrapping into the well-developed center of circulation and a clear eye. The bands of thunderstorms extend almost 300 nautical miles/ 345.2 miles/555.6 km to the north and about 240 nautical miles/276.2 miles/444.5 km to the south. 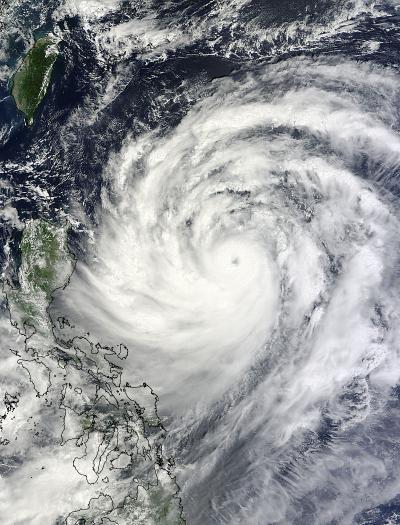 The MODIS instrument aboard NASA's Terra satellite captured this amazing image of Typhoon Usagi on Sept. 19 at 02:25 UTC moving near the Philippines.

The Joint Typhoon Warning Center or JTWC forecast indicates that Usagi is not yet at its most powerful. Usagi is expected to continue intensifying to a peak of 140 knots/161 mph/259.3 kph over Sept. 19, and could exceed that speed, according to JTWC.

Over the next two days, Sept. 20 and 21, forecasters at the Joint Typhoon Warning Center expect Usagi to move west-northwest and pass just south of the southern tip of Taiwan before making landfall near Hong Kong on Sept. 22.