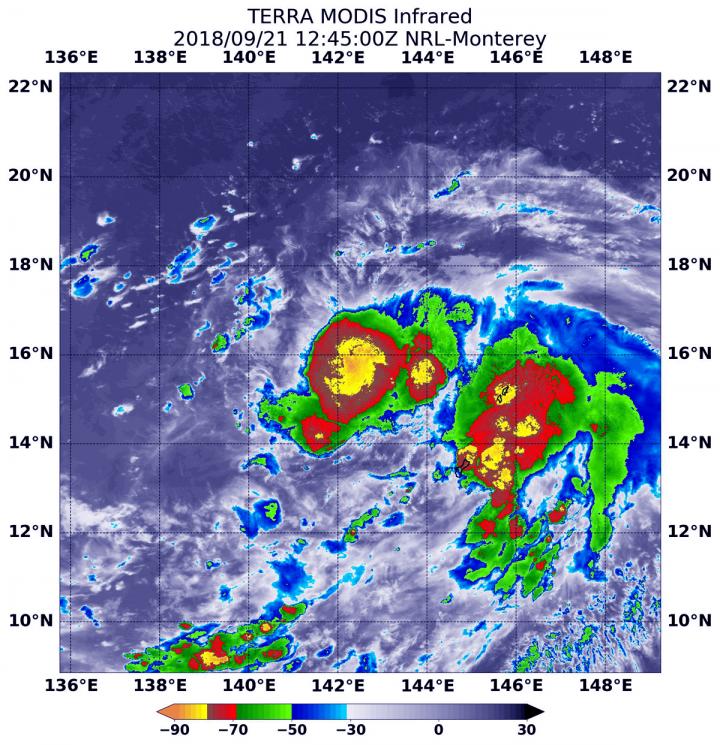 NOAA's National Weather Service (NWS) in Tiyan, Guam said that a flash flood watch is in effect for all of Guam and the northern Marianas. A small craft advisory remains in effect until 6 a.m. CHST local time on Sunday, Sept. 23.

However, the Tropical Storm Watch for Rota, Tinian and Saipan has been canceled.  Because Tropical Storm Trami (28W) continues to move away from the Marianas the threat of damaging winds has ended.

NASA research has found that cloud top temperatures as cold as or colder than the 70F/56.6C threshold have the capability to generate heavy rainfall.

On Sept. 21, Trami was located near latitude 15.3 degrees north and longitude 142.9 degrees east. That's about 175 miles west-northwest of Rota and about 180 miles northwest of Guam. Trami is moving northwest at 12 mph. It is expected to make a slight turn toward the west-northwest with little change in forward speed over the next 24 hours. Maximum sustained winds have increased to 40 mph. 28W is forecast to intensify through Saturday. Tropical storm force winds extend outward from the center up to 120 miles.

NWS issued a special weather statement for Micronesia that said areas of heavy showers and thunderstorms can be found near Trami and in the monsoon flow southwest of the storm. The westerly monsoonal flow across Yap State and the Republic of Palau will increase during the next few days. Showery weather and locally gusty winds are likely for Yap and Koror through this weekend. Sea and surf conditions may become hazardous at times.