An ultra-fast and ultra-small optical switch has been invented that could advance the day when photons replace electrons in the innards of consumer products ranging from cell phones to automobiles.

The new optical device can turn on and off trillions of times per second. It consists of individual switches that are only one five-hundredths the width of a human hair (200 nanometers) in diameter. This size is much smaller than the current generation of optical switches and it easily breaks one of the major technical barriers to the spread of electronic devices that detect and control light: miniaturizing the size of ultrafast optical switches.

The new device was developed by a team of scientists from Vanderbilt University, University of Alabama-Birmingham, and Los Alamos National Laboratory and is described in the Mar. 12 issue of the journal Nano Letters.

The ultrafast switch is made out of an artificial material engineered to have properties that are not found in nature. In this case, the "metamaterial" consists of nanoscale particles of vanadium dioxide (VO2) – a crystalline solid that can rapidly switch back and forth between an opaque, metallic phase and a transparent, semiconducting phase – which are deposited on a glass substrate and coated with a "nanomesh" of tiny gold nanoparticles.

The scientists report that bathing these gilded nanoparticles with brief pulses from an ultrafast laser generates hot electrons in the gold nanomesh that jump into the vanadium dioxide and cause it to undergo its phase change in a few trillionths of a second.

"We had previously triggered this transition in vanadium dioxide nanoparticles directly with lasers and we wanted to see if we could do it with electrons as well," said Richard Haglund, Stevenson Professor of Physics at Vanderbilt, who led the study. "Not only does it work, but the injection of hot electrons from the gold nanoparticles also triggers the transformation with one fifth to one tenth as much energy input required by shining the laser directly on the bare VO2." 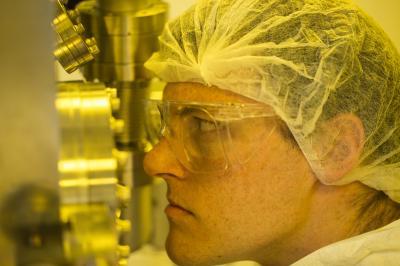 Both industry and government are investing heavily in efforts to integrate optics and electronics, because it is generally considered to be the next step in the evolution of information and communications technology. Intel, Hewlett-Packard and IBM have been building chips with increasing optical functionality for the last five years that operate at gigahertz speeds, one thousandth that of the VO2 switch.

"Vanadium dioxide switches have a number of characteristics that make them ideal for optoelectronics applications," said Haglund. In addition to their fast speed and small size, they:

"Vanadium dioxide's amazing properties have been known for more than half a century. At Vanderbilt, we have been studying VO2 nanoparticles for the last ten years, but the material has been remarkably successfully at resisting theoretical explanations," said Haglund. "It is only in the last few years that intensive computational studies have illuminated the physics that underlies its semiconductor-to-metal transition."

Vanderbilt graduate students Kannatassen Appavoo and Joyeeta Nag fabricated the metamaterial at Vanderbilt; Appavoo joined forces with University of Alabama, Birmingham graduate student Nathaniel Brady and Professor David Hilton to carry out the ultrafast laser experiments with the guidance of Los Alamos National Laboratory staff scientist Rohit Prasankumar and postdoctoral scholar Minah Seo. The theoretical and computational studies that helped to unravel the complex mechanism of the phase transition at the nanoscale were carried out by postdoctoral student Bin Wang and Sokrates Pantelides, University Distinguished Professor of Physics and Engineering at Vanderbilt.