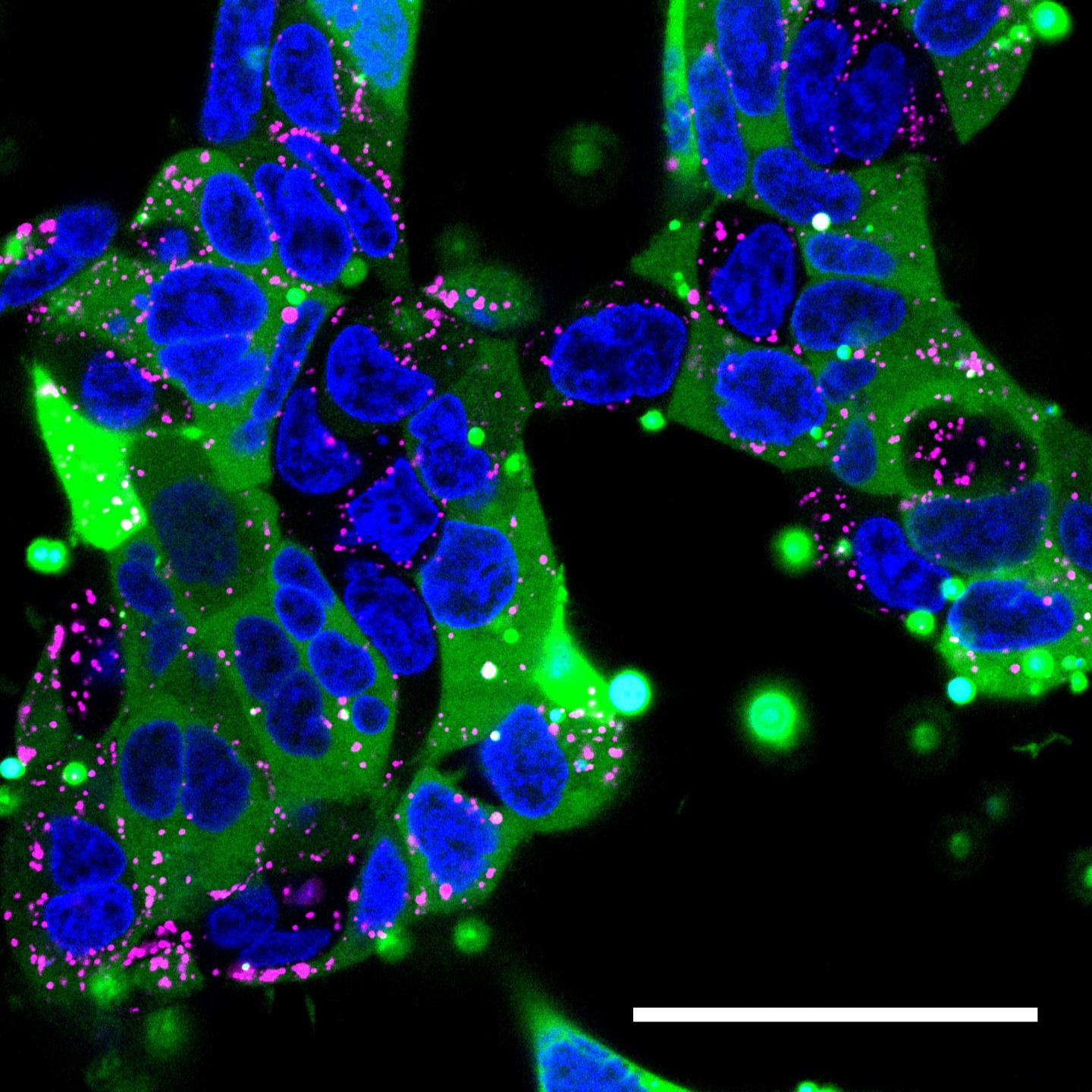 IMAGE: Confocal microscopy image of human embryonic kidney cells. Nanoparticles filled with human immunoglobulin were delivered to the cells. The cell nucleus is blue, endosomes (which sequester materials taken up by...

Scientists at Johns Hopkins Medicine report they have created a tiny, nanosize container that can slip inside cells and deliver protein-based medicines and gene therapies of any size -- even hefty ones attached to the gene-editing tool called CRISPR. If their creation - constructed of a biodegradable polymer -- passes more laboratory testing, it could offer a way to efficiently ferry larger medical compounds into specifically selected target cells.

A report on their work appears in the Dec. 6 issue of Science Advances.

"Most medicines spread throughout the body in an indiscriminate way and don't target a specific cell," says biomedical engineer Jordan Green, Ph.D., leader of the research team. "Some medicines, such as antibodies, latch on to targets on the cell's surface receptors, but we don't have good systems for delivering biological medicines straight to the inside of a cell, which is where therapies would have the best chance at working properly and with fewer side effects."

Many academic and commercial scientists have long sought better transit systems for therapies, says Green, professor of biomedical engineering, ophthalmology, oncology, neurosurgery, materials science and engineering, and chemical and biomolecular engineering at the Johns Hopkins University School of Medicine, and a member of the Bloomberg~Kimmel Institute for Cancer Immunotherapy at Johns Hopkins.

Some commercially available techniques use stripped down forms of viruses - known for their ability to "infect" cells directly -- to deliver therapies, although the noninfectious versions of these delivery systems can unleash an unwanted immune system response. Other therapies aimed at diseased blood cells, for example, are more cumbersome, requiring patients' blood to be removed, then zapped with an electric current that opens pores in the cell membrane to gain entry.

The nanosize container that Green and his team developed at Johns Hopkins borrows an idea from the properties of viruses, many of which are nearly spherical in shape and carry both negative and positive charges. With a more neutral overall charge, viruses can get close to cells. That's not the case with many biological medicines, which consist of highly charged, large proteins and nucleic acids that tend to repel off cells.

To overcome this, graduate student Yuan Rui developed a new biodegradable polymer material. Polymer is the general term for a substance made up of many molecules. To make the polymer, Rui strung together -- like the branches of a tree -- four component molecules that, over time, break down and dissolve in water. The molecules contain both positive and negative charges.

With a balance of positive and negative charges, the molecules push and pull according to their charge and their hydrogen atoms bond with a biological therapy in the vicinity. The result is a nano-structure containing the biological therapy.

The nanosize container's positive charges interact with the membrane of a cell, and the container is engulfed in a cellular package called an endosome.

Once inside, the nanosize container breaks open the endosome, and the polymers degrade, leaving the medicine to work inside the cell.

To test their invention, Rui made a nanocontainer of a small protein and fed it to mouse kidney cells in culture dishes. She attached a green fluorescent tag to the small protein and saw bright green splashes throughout most of the cells, indicating that the protein was successfully delivered.

Then, Rui packaged a bigger protein: human immunoglobulin, a therapy typically used to strengthen the immune system and a model for antibody therapies. This time, she found that 90% of the kidney cells she treated lit up with the green fluorescent tag attached to the immunoglobulin.

"When nanoparticles enter a cell, they often get sequestered into endosomes, which degrade its contents, but our experiments show the protein packages uniformly spread throughout most of the cells and were not stuck in the endosomes," says Rui.

For an even greater challenge, Rui created a nanopackage containing a CRISPR-based protein and nucleic acid complex that could turn off a green fluorescence signal or cause the cells to glow red when the CRISPR compound cut part of a cell's genome. The researchers saw that the gene editing to disable a gene worked in up to 77% of cells grown in the laboratory and to add or repair a gene in about 4% of cells.

"That's pretty effective considering, with other gene editing systems, you might get the correct gene-cutting result less than 10 percent of the time," said Rui. CRISPR-based therapies have the potential to make medicines far more precise with their ability to precisely target genetic flaws that contribute to disease. Some CRISPR therapies are being tested in clinical trials.

'When I first started this project five years ago, scientists didn't think that you could use something other than a virus to deliver these therapies into cells," says Rui. "Developing new technologies can help us understand more about disease, but also more about making new drugs."

Rui and Green are trying to make the nanocontainers more stable so they can be injected into the bloodstream and targeted to cells with certain genetic signatures.

The scientists are filing for patents related to this work.