PASADENA, Calif.—In order to build the next generation of nuclear reactors, materials scientists are trying to unlock the secrets of certain materials that are radiation-damage tolerant. Now researchers at the California Institute of Technology (Caltech) have brought new understanding to one of those secrets—how the interfaces between two carefully selected metals can absorb, or heal, radiation damage.

"When it comes to selecting proper structural materials for advanced nuclear reactors, it is crucial that we understand radiation damage and its effects on materials properties. And we need to study these effects on isolated small-scale features," says Julia R. Greer, an assistant professor of materials science and mechanics at Caltech. With that in mind, Greer and colleagues from Caltech, Sandia National Laboratories, UC Berkeley, and Los Alamos National Laboratory have taken a closer look at radiation-induced damage, zooming in all the way to the nanoscale—where lengths are measured in billionths of meters. Their results appear online in the journals Advanced Functional Materials and Small.

During nuclear irradiation, energetic particles like neutrons and ions displace atoms from their regular lattice sites within the metals that make up a reactor, setting off cascades of collisions that ultimately damage materials such as steel. One of the byproducts of this process is the formation of helium bubbles. Since helium does not dissolve within solid materials, it forms pressurized gas bubbles that can coalesce, making the material porous, brittle, and therefore susceptible to breakage.

Some nano-engineered materials are able to resist such damage and may, for example, prevent helium bubbles from coalescing into larger voids. For instance, some metallic nanolaminates—materials made up of extremely thin alternating layers of different metals—are able to absorb various types of radiation-induced defects at the interfaces between the layers because of the mismatch that exists between their crystal structures.

"People have an idea, from computations, of what the interfaces as a whole may be doing, and they know from experiments what their combined global effect is. What they don't know is what exactly one individual interface is doing and what specific role the nanoscale dimensions play," says Greer. "And that's what we were able to investigate."

Peri Landau and Guo Qiang, both postdoctoral scholars in Greer's lab at the time of this study, used a chemical procedure called electroplating to either grow miniature pillars of pure copper or pillars containing exactly one interface—in which an iron crystal sits atop a copper crystal. Then, working with partners at Sandia and Los Alamos, in order to replicate the effect of helium irradiation, they implanted those nanopillars with helium ions, both directly at the interface and, in separate experiments, throughout the pillar. 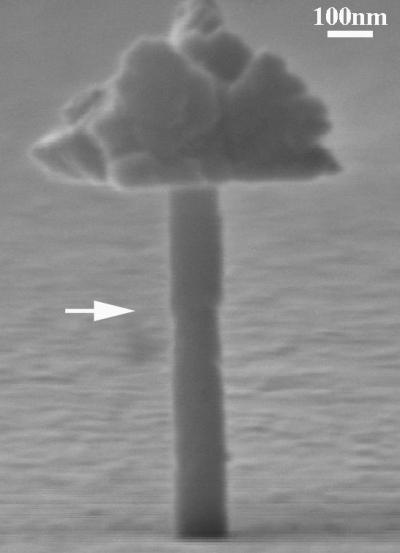 A copper and iron nano pillar that has been implanted with helium (as seen with a scanning electron microscope). The arrow points to the interface between the two metals.

The researchers then used a one-of-a-kind nanomechanical testing instrument, called the SEMentor, which is located in the subbasement of the W. M. Keck Engineering Laboratories building at Caltech, to both compress the tiny pillars and pull on them as a way to learn about the mechanical properties of the pillars—how their length changed when a certain stress was applied, and where they broke, for example.

"These experiments are very, very delicate," Landau says. "If you think about it, each one of the pillars—which are only 100 nanometers wide and about 700 nanometers long—is a thousand times thinner than a single strand of hair. We can only see them with high-resolution microscopes."

The team found that once they inserted a small amount of helium into a pillar at the interface between the iron and copper crystals, the pillar's strength increased by more than 60 percent compared to a pillar without helium. That much was expected, Landau explains, because "irradiation hardening is a well-known phenomenon in bulk materials." However, she notes, such hardening is typically linked with embrittlement, "and we do not want materials to be brittle."

Surprisingly, the researchers found that in their nanopillars, the increase in strength did not come along with embrittlement, either when the helium was implanted at the interface, or when it was distributed more broadly. Indeed, Greer and her team found, the material was able to maintain its ductility because the interface itself was able to deform gradually under stress.

This means that in a metallic nanolaminate material, small helium bubbles are able to migrate to an interface, which is never more than a few tens of nanometers away, essentially healing the material. "What we're showing is that it doesn't matter if the bubble is within the interface or uniformly distributed—the pillars don't ever fail in a catastrophic, abrupt fashion," Greer says. She notes that the implanted helium bubbles—which are described in the Advanced Functional Materials paper—were one to two nanometers in diameter; in future studies, the group will repeat the experiment with larger bubbles at higher temperatures in order to represent additional conditions related to radiation damage.

In the Small paper, the researchers showed that even nanopillars made entirely of copper, with no layering of metals, exhibited irradiation-induced hardening. That stands in stark contrast to the results from previous work by other researchers on proton-irradiated copper nanopillars, which exhibited the same strengths as those that had not been irradiated. Greer says that this points to the need to evaluate different types of irradiation-induced defects at the nanoscale, because they may not all have the same effects on materials.

While no one is likely to be building nuclear reactors out of nanopillars anytime soon, Greer argues that it is important to understand how individual interfaces and nanostructures behave. "This work is basically teaching us what gives materials the ability to heal radiation damage—what tolerances they have and how to design them," she says. That information can be incorporated into future models of material behavior that can help with the design of new materials.