How do bone-eating worms reproduce? A new study by Norio Miyamoto and colleagues from the Japan Agency for Marine-Earth Science and Technology sheds light on this question through a detailed observation of the postembryonic development and sexual maturation of Osedax worms, also known as "zombie worms." These worms typically inhabit vertebrate bones on the seafloor. The study is published online in Springer's journal Naturwissenschaften - The Science of Nature.

Osedax is Latin for "bone-devourer," which refers to how the worms bore into the bones of whale carcasses to reach enclosed fats and oils, on which they rely for sustenance. The first two species of Osedax were discovered by scientists in 2002. To date, information about the postembryonic development of these marine worms, Osedax species, is lacking. In order to understand their development and maturation, Miyamoto and team induced settlement of the bone-eating worm's larvae (Osedax japonicus specifically) by adding small pieces of whale bone to the petri dishes in which they were cultivating the larvae. After a period of time, they dissected the bones to observe the juvenile worms.

The researchers witnessed the whole development process of the worms, including the duration of the larval stage, the development of typically small, dwarf males and the maturation time in this species. They found that females started to spawn eggs six weeks after settlement. This rapid sexual maturation of females, alongside the male dwarfism which was observed, enables the worms to reproduce effectively in the food-rich, but highly isolated habitat of whale bones. 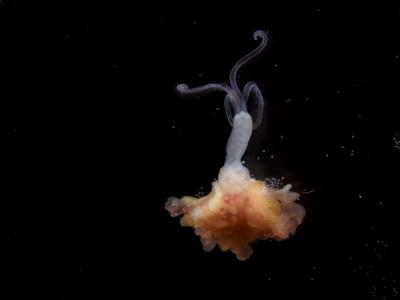 This image shows Osedax japonicus: An adult female exposed from a bone.

Dr. Miyamoto said, "Our findings provide essential information on the reproductive strategy of Osedax worms. Osedax japonicus are a promising model organism with which to address the evolution and development of these so-called bone-eating worms."