My eyes are up here!

Lincoln, Neb., Oct. 29, 2013 – Usually, women can tell when someone's eyes aren't on her face and are, well, focused elsewhere on her body. In other words, there's a reason the saying on the t-shirt is My Eyes Are Up Here.

But how, exactly, does that "objectifying gaze" play out? Despite plenty of anecdotal evidence, research had yet to empirically document the nature of roving eyes when it came to women's bodies – until now.

A new study by University of Nebraska-Lincoln psychologists Sarah Gervais and Michael Dodd employed eyetracking technology to intricately map the visual behavior of both men and women as they viewed images of different females with different body types.

When asked to focus on a woman's appearance, study participants largely looked at women in "that way" – they quickly moved their eyes to and then dwelled on a woman's breasts and other sexualized body parts.

The study was published today in the academic journal Sex Roles and, researchers said, could provide the first steps toward addressing objectifying gazes and limiting their effects on women.

Though the men in the study exhibited such visual behavior consistently, the researchers found that women's eye patterns actually were similar to men's. However, male participants regarded the curvaceous women more positively than women with fewer curves, whereas female participants viewed these women similarly.

The researchers outfitted 65 college students with an eyetracking device and asked them to look at 30 photos of 10 college-aged women and to either rate the appearance or personality of the female in each picture. Each original image was manipulated to enhance or decrease the woman's sexualized body parts in an attempt to determine whether specific body types were more or less likely to be objectified.

Though the results were consistent with anecdotal expectations of gaze behavior, Gervais said she was surprised with some of the findings, especially how strongly women's visual patterns suggest they objectify other women.

"We do have a slightly different pattern for men than women, but when we looked at their overall dwell times – how long they focused on each body part – we find the exact same effects for both groups," she said. "Women, we think, do it often for social comparison purposes."

Whereas men were fast to fixate on both the bodies and faces of female targets, women in some circumstances were more likely to focus more quickly on faces.

Another key finding related to the role of body shape. Even when study instructions encouraged the participants to focus on the personality of the female target – a manipulation that would seem likely to lead to additional focus on the images' faces – women with hourglass figures were perceived more positively than women with straighter figures by male participants, the researchers found.

Objectifying gazes, of course, can have negative consequences: Prior research shows that when women are objectified, they are perceived to be less friendly, not as intelligent or competent or less moral.

"It can undermine (women's) work performance. It can cause them to self-silence and it's related to increased perceptions of sexual harassment," Gervais said. "If you think about all of the negative consequences, figuring out what's triggering all of those consequences, that's the first step toward stopping it from happening."

Dodd said the study's use of both personality- and appearance-focused groups shows that the behavior can be changed with self-awareness.

"By characterizing the manner in which people fixate on the body when engaging in objectifying behavior, it also becomes possible to determine methods of reducing this behavior. That's what the personality manipulation part of the study did – that's a huge positive," Dodd said. "It's not as though looking at the body of someone has to be, or is, a default behavior. It just may be the case that cognitive control is required to engage in more appropriate, and less damaging, visual behavior." 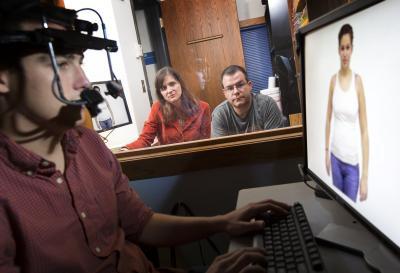