CHAMPAIGN, Ill. — A drug under clinical trials to treat tuberculosis could be the basis for a class of broad-spectrum drugs that act against various bacteria, fungal infections and parasites, yet evade resistance, according to a study by University of Illinois chemists and collaborators.

Led by U. of I. chemistry professor Eric Oldfield, the team determined the different ways the drug SQ109 attacks the tuberculosis bacterium, how the drug can be tweaked to target other pathogens from yeast to malaria – and how targeting multiple pathways reduces the probability of pathogens becoming resistant. SQ109 is made by Sequella Inc., a pharmaceutical company.

"Drug resistance is a major public health threat," Oldfield said. "We have to make new antibiotics, and we have to find ways to get around the resistance problem. And one way to do that is with multitarget drugs. Resistance in many cases arises because there's a specific mutation in the target protein so the drug will no longer bind. Thus, one possible route to attacking the drug resistance problem will be to devise drugs that don't have just one target, but two or three targets."

Oldfield read published reports about SQ109 and realized that the drug would likely be multifunctional because it had chemical features similar to those found in other systems he had investigated. The original developers had identified one key action against tuberculosis – blocking a protein involved in building the cell wall of the bacterium – but conceded that the drug could have other actions within the cell as well since it was found to kill other bacteria and fungi that lacked the target protein. Oldfield believed he could identify those actions – and perhaps improve upon SQ109.

"I was reading Science magazine one day and saw this molecule, SQ109, and I thought, that looks a bit like molecules we've been studying that have multiple targets," Oldfield said. "Given its chemical structure, we thought that some of the enzymes that we study as cancer and antiparasitic drug targets also could be SQ109 targets. We hoped that we could make some analogs that would be more potent against tuberculosis, and maybe even against parasites." 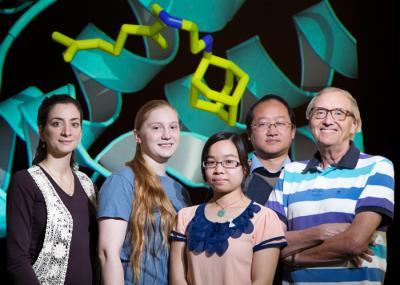 By studying SQ109 for themselves, Oldfield's team determined that SQ109 does indeed block other proteins involved in critical functions in bacteria, fungi and parasites – but not humans. They found it inhibits two enzymes that make the molecule menaquinone, which is involved in generating the cell's energy. Then they found that SQ109 had a third action, called uncoupling, which makes the cell membrane permeable – essentially transforming the membrane from a wall to a screen door.

Then, the team created a dozen chemical analogs – molecules that are structurally and functionally similar, but tweaked to be more effective or less toxic – and tested them against cultures of bacteria, fungi, parasites and human cells. They found that they could make analogs with maximum effectiveness against certain classes of pathogens; for example, one analog turned out to be five times more potent against the tuberculosis bacterium than the original SQ109. They also found analogs that kill the parasites that cause the most serious and common form of malaria.

Now, the researchers are working with international collaborators to apply SQ109 analogs against other infectious diseases rampant in the tropical world, such as Chagas' disease, leishmaniasis and sleeping sickness.

Oldfield believes that multiple-target drugs, like SQ109 and its analogs, hold the key to antibiotic development in the age of drug resistance and the rise of so-called "superbugs." Evidence supports that assessment: So far, in experiments with tuberculosis, no instances of SQ109 resistance have been reported.