Cutting-edge simulations run at Lawrence Berkeley National Laboratory's National Energy Research Scientific Computing Center (NERSC) over a two-year period are helping physicists better understand what influences the behavior of the plasma turbulence that is driven by the intense heating necessary to create fusion energy. This research has yielded exciting answers to long-standing questions about plasma heat loss that have previously stymied efforts to predict the performance of fusion reactors and could help pave the way for this alternative energy source.

The key to making fusion work is to maintain a sufficiently high temperature and density to enable the atoms in the reactor to overcome their mutual repulsion and bind to form helium. But one side effect of this process is turbulence, which can increase the rate of plasma heat loss, significantly limiting the resulting energy output. So researchers have been working to pinpoint both what causes the turbulence and how to control or possibly eliminate it.

Because fusion reactors are extremely complex and expensive to design and build, supercomputers have been used for more than 40 years to simulate the conditions to create better reactor designs. NERSC is a Department of Energy Office of Science User Facility that has supported fusion research since 1974. 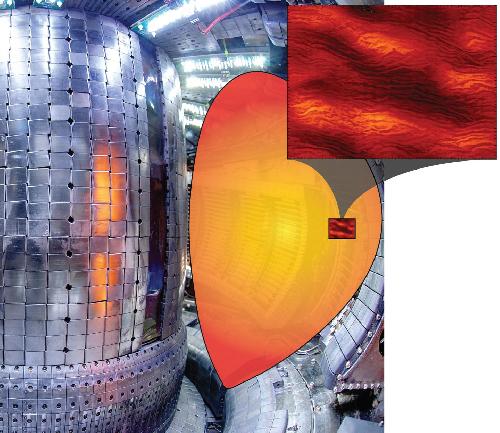 One roadblock in the quest for fusion is that, to date, computer models have often been unable to predict exactly how turbulence will behave inside the reactor. In fact, there have long been differences between predictions and experimental results in fusion experiments when studying how turbulence contributes to heat loss in the confined plasma.

Now researchers at MIT's Plasma Science and Fusion Center, in collaboration with colleagues at the University of California at San Diego (UCSD) and General Atomics, have discovered a solution to this disparity. By performing high-resolution multi-scale simulations, the team was able to simultaneously resolve multiple turbulence instabilities that have previously been treated in separate simulations. A series of these multi-scale simulations run on NERSC's Edison system found that interactions between turbulence at the tiniest scale (that of electrons) and turbulence at a scale 60 times larger (that of ions) can account for the mysterious mismatch between theoretical predictions and experimental observations of the heat loss.

The findings, published December 17, 2015 in Nuclear Fusion, could greatly improve our knowledge of what's really going on inside the current tokamak research experiments that exist around the world and in future experimental reactors under construction or planning, the researchers noted.

"For a very long time, the predictions from leading theories have been unable to explain how much heat loss is coming from electrons in fusion plasma," said Nathan Howard, a research scientist at MIT's Plasma and Fusion Science Center and lead author on the Nuclear Fusion paper. "You apply your best theories, but they have underpredicted the amount of heat loss coming from the electrons. In this particular work, we have shown that using the coupled model--where you capture both the large-scale and small-scale turbulence simultaneously--you can actually reproduce the experimental electron heat losses, in part because there appear to be strong interactions between the large-scale and small-scale turbulence that weren't well understood previously."

Doing so requires prodigious amounts of computer time to run simulations that encompass such widely disparate scales, he emphasized. The entire study took between 100 million and 120 million CPU hours on Edison, Howard noted; each simulation required approximately 15 million hours of computation, carried out by using 17,000-30,000 processors at NERSC, making Howard the biggest user of NERSC computing time in 2014. Using an ordinary MacBook Pro to run the full set of six simulations that the team carried out, he estimates, would have taken about 3,000 years.

"I ran one entire simulation in 36-hour jobs and had to restart it about 24 times to get it to run long enough," he explained. "And that's not accounting for the amount of time it took to get jobs through the queue on the supercomputer."

"We are actually able to reproduce multiple aspects of the experiment with our simulations, which is important because it gives you some confidence that what you are seeing in the simulations is actually representative of reality," Howard said.

For more than a decade, the general expectation by physicists had been that, because the turbulent "swirls" associated with the ions are so much larger than those associated with electrons, electron-scale swirls would simply be smeared out by the much larger turbulent ion motion. And even if the smaller swirls survived the larger ion-scale turbulence, their tiny size suggested that their effects on heat loss would be negligible.

But the new findings show that this thinking is not always correct. The two scales of turbulence can indeed coexist, the researchers found, and when they do they can interact with each other so strongly that it's impossible to predict the total heat loss accurately unless using a simulation that simultaneously resolves both scales. In fact, far from being eliminated by the larger-scale turbulence, the tiny swirls produced by electrons continue to be clearly visible in the results, stretched out into long ribbons that wind around the donut-shaped vacuum chamber that characterizes a tokamak reactor. Despite the temperature of 100 million degrees Celsius inside the plasma, these ribbon-like swirls, or eddies, persist long enough to influence how heat gets dissipated from the turbulent mass--a determining factor in how much fusion can actually take place inside the reactor.

"This is the first time a lot of these very big hypotheses have been confirmed and shown to be operative in relevant plasma conditions," said Chris Holland, associate research scientist in the Center for Energy Research at UCSD and a co-author on the Nuclear Fusion paper.

Looking ahead, work is already underway to modify the numerical and parallelization algorithms in GYRO so it will be able to make optimal use of many-integrated-core architectures (like Cori Phase II) as well as sophisticated accelerator hardware on emerging and future exascale platforms. "We are redesigning the GYRO code from the ground up to take advantage of these powerful but challenging new architectures and to increase the physics fidelity of the simulations," Candy said.

"The challenge we are working on right now is figuring out how to get the complicated simulations, which require significant memory size and bandwidth, to work efficiently and scale well on these new platforms so we can continue to study even more complex scenarios," Holland added. "I think this is a problem that can be solved, and if we are successful it opens up exciting possibilities for new ways of doing the simulations, looking at more scales and doing more comprehensive predictions for ITER and other kinds of reactors. If we can find a way to use the new generation of platforms and make these simulations more routine, then it becomes a really exciting tool."