Multiple mates worth the risk for female prairie dogs

FROSTBURG, MD (December 4, 2013) –Mating with more than one male increases reproductive success for female prairie dogs, despite an increase in risks. This is according to a new study published in The Journal of Mammalogy by behavioral ecologist John Hoogland, Professor at the University of Maryland Center for Environmental Science's Appalachian Laboratory.

"Prairie dogs are excellent models for a study of polyandry because they are easy to livetrap, mark, and observe. Further, each female is sexually receptive for only 5-6 hours of a single day each year, so my students and I can record all the males with whom she mates during that small window of opportunity," says Hoogland. "Finally, females remain in the same territory after mating, so we can determine reproductive success for all the females in our study-colony each year."

For the last 35 years, Hoogland has studied four species of prairie dogs living in grassland ecosystems within national parks or wildlife refuges in the western U.S. These species are black-tailed, Gunnison's, Utah, and white-tailed prairie dogs. From observations of marked individuals, Hoogland recorded the number of sexual partners and reproductive success for females of all four species. 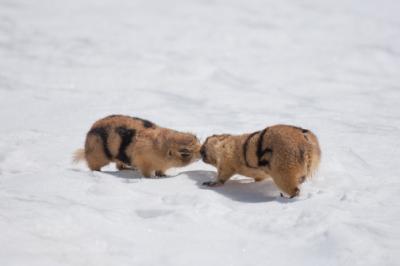 Hoogland quantified female reproductive success by tracking the number of offspring that survived until the following spring (when they were yearlings and before dispersal might have impacted the results). Other components of fitness were also considered, but Hoogland concluded that the number of yearlings was the best estimate of a female's ultimate reproductive success.

Hoogland and his research assistants were able to document 2,504 copulations by 1,426 females living under natural conditions from 1978 through 2012. They found that the frequency of polyandry (mating with more than one male) varied significantly among the four species. The black-tailed and white-tailed prairie dogs were mostly monandrous (mating with only one male), but the Gunnison's and Utah prairie dogs were mostly polyandrous. The number of yearlings was higher for polyandrous females for three of the four species. For Gunnison's and white-tailed prairie dogs, however, polyandrous females were less likely than monandrous females to survive until the next mating season.

"My results underscore the value of long-term comparative research with closely related species. If I had studied only black-tailed prairie dogs, I would have concluded that costs and benefits of polyandry are minimal. If I had studied only Gunnison's prairie dogs, on the other hand, I would have concluded that both costs and benefits of polyandry dramatically affect female survivorship and female reproductive success," says Hoogland. "For most animals, including Utah and white-tailed prairie dogs, the truth about polyandry usually lies somewhere between these two extremes."

"Why do female prairie dogs copulate with more than one male? Insights from long-term research" was published in the September issue of The Journal of Mammalogy.