Researchers around the world are working on an efficient, reliable way to contain the plasma used in fusion reactors, potentially bringing down the cost of this promising but technically elusive energy source. A new finding from the University of Washington could help contain and stabilize the plasma using as little as 1 percent of the energy required by current methods.

"All of a sudden the current energy goes from being almost too much to almost negligible," said lead author Thomas Jarboe, a UW professor of aeronautics and astronautics. He presents the findings this week at the International Atomic Energy Association's 24th annual Fusion Energy Conference in San Diego.

The new equipment looks like handles on a coffee mug – except they attach to a vessel containing a million-degree plasma that is literally too hot to handle.Most people know about nuclear fission, the commercial type of nuclear power generated from splitting large atoms in two. Still under research is nuclear fusion, which smashes two small atoms together, releasing energy without requiring rare elements or generating radioactive waste. 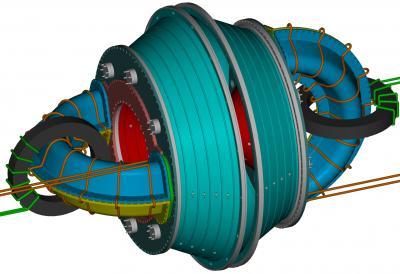 This is a computer drawing of the prototype, which attaches current-carrying handles to either end of the central plasma.

Of course, there's a catch – smashing the atoms together takes a lot of energy, and scientists are still working on a way to do it so you get out more energy than you put in. The sun is a powerful fusion reactor but we can't recreate a full-scale sun on Earth.

An international project in France is building a multibillion-dollar fusion reactor to see whether a big enough reactor can generate fusion power.

The reactor in France will inject high-frequency electromagnetic waves and high-speed hydrogen ions to sustain the plasma by maintaining an even hotter 100-million-degree operating temperature and enclosing it with magnetic fields.

"That method works," Jarboe said, "but it's extremely inefficient and expensive, to the point that it really is a major problem with magnetic confinement."

For two decades Jarboe's team has worked on helicity injection as a more efficient alternative. Spirals in the plasma produce asymmetric currents that generate the right electric and magnetic fields to heat and confine the contents. Plasma is so hot that the electrons have separated from the nuclei. It cannot touch any walls and so instead is contained by a magnetic bottle. Keeping the plasma hot enough and sustaining those magnetic fields requires a lot of energy.

"We would drive it until it was unstable," Jarboe said of his approach. "Like you twist up a rope, the plasma twists up on itself and makes the instability and makes the current drive."

Results showed the UW strategy required less energy than other methods, but the system was unstable, meaning that if conditions change it could wobble out of control. It's like a stick balancing on one end, which is stable at that moment, but is likely to come crashing down with any nudge. In the case of plasma, unstable equilibrium means that a twist in the plasma could cause it to escape and potentially lead to a costly reactor shutdown. 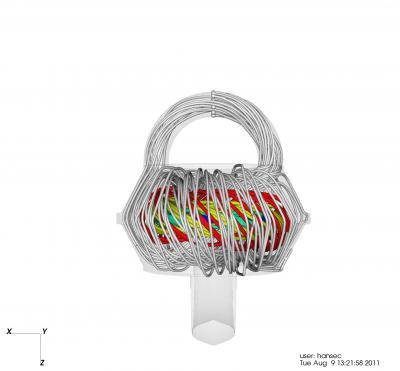 Alternating the current through the handles produce asymmetric magnetic fields, shown here, which act to contain the plasma.

Instability was a major impediment to applying the UW method.

"The big issue is whether, when you distort the bottle, it will leak," Jarboe said.

By contrast, in a stable equilibrium, any shift will tend to come back toward the original state, like a ball resting at the bottom of a bowl that will settle back where it started.

"Here we imposed the asymmetric field, so the plasma doesn't have to go unstable in order for us to drive the current. We've shown that we can sustain a stable equilibrium and we can control the plasma, which means the bottle will be able to hold more plasma," Jarboe said.

The UW apparatus uses two handle-shaped coils to alternately generate currents on either side of the central core, a method the authors call imposed dynamo current drive. Results show the plasma is stable and the method is energy-efficient, but the UW research reactor is too small to fully contain the plasma without some escaping as a gas. Next, the team hopes to attach the device to a larger reactor to see if it can maintain a sufficiently tight magnetic bottle. 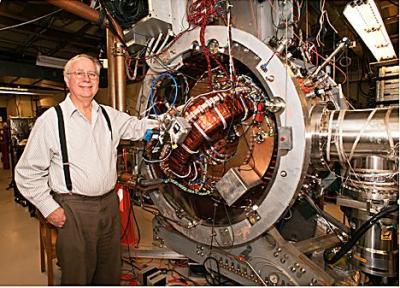 Tom Jarboe has worked on fusion energy for more than three decades. The new copper handles can replicate the UW's low-energy approach while maintaining a stable plasma.