Movement of a liquid droplet generates over 5 volts of electricity 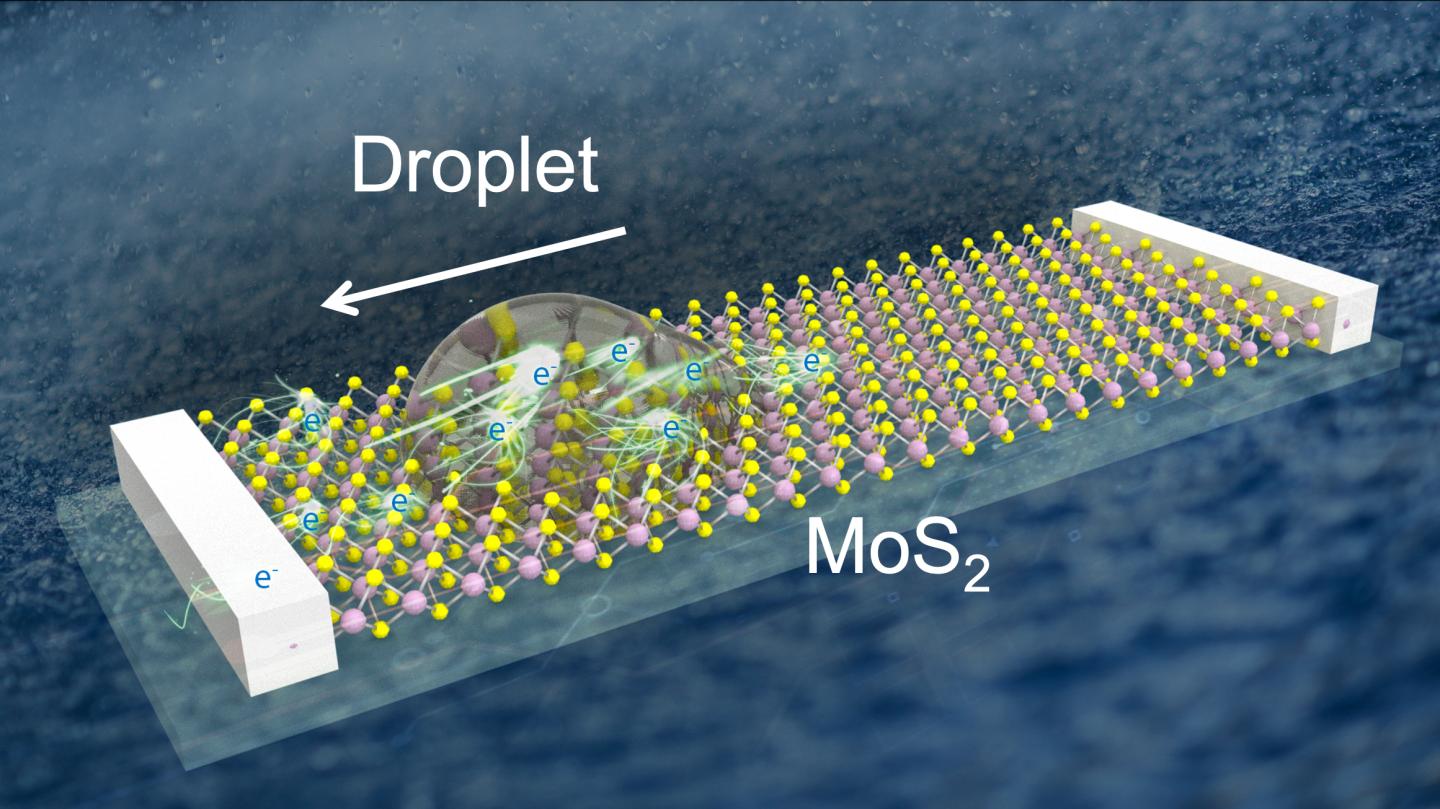 image: A droplet moving on MoS2 generates the voltage as high as 5 V

Energy harvesting, a technology to transform small quantities of naturally occurring energy (e.g. light, heat and vibration) into electricity, is gaining attention as a method to power the Internet of Things (IoT) devices. This technology helps reduce environmental impacts and has a potential to power electronic devices in a stable and long-term manner, unlike batteries that need recharging or replacing.

Researchers at Nagoya University and Kyushu University focused on energy from the tiny movement of liquid and developed a device that generates over 5 volts of electricity directly from the movement of a liquid droplet. This device, made of flexible thin films, generates electricity when drops of water slide down on its upper surface. This technology is expected to be applied to self-powered devices used in liquids, including sensors monitoring the quality of wastewater from factories. Their findings have been published in the journal Nano Energy.

Energy generated from the tiny flow of liquid exists in various environments, such as inside of factory pipes, and in micro-fluid devices, but this kind of energy has not been used effectively so far. It has been shown that a graphene sheet can generate electricity from the liquid movement across its surface. However, its output voltage is limited to about 0.1 volt, which is not enough to drive electronic devices.

The research group, consisting of Nagoya University's Adha Sukma Aji, Ryohei Nishi, and Yutaka Ohno and Kyushu University's Hiroki Ago, has demonstrated that using molybdenum disulfide (MoS2) instead of graphene as the active material in the generator makes it possible to generate over 5 volts of electricity from a liquid droplet.

"To use MoS2 for the generator, it was necessary to form a large-area single-layer MoS2 film on a plastic film. With conventional methods, however, it was difficult to grow MoS2 uniformly on a large-area substrate," says Professor Ohno of the Institute of Materials and Systems for Sustainability at Nagoya University. "In our study, we succeeded in fabricating this form of MoS2 film by means of chemical vapor deposition using a sapphire substrate with molybdenum oxide (MoO3) and sulphur powders. We also used a polystyrene film as a bearing material for the MoS2 film, so that we were able to transfer the synthesized MoS2 film to the surface of the plastic film quite easily."

The newly developed generator is flexible enough to be installed on the curved inner surface of plumbing, and is thus expected to be used to power IoT devices used in liquids, such as self-powered rain gauges and acid rain monitors, as well as water quality sensors that can generate power from industrial wastewater while monitoring it.

Professor Ohno says, "Our MoS2 nanogenerator is able to harvest energy from multiple forms of liquid motion, including droplets, spraying, and sea waves. From a broader perspective, this device could also be used in applications involving hydrodynamics, such as generating electricity from rainwater and waterfalls."