Using this garment-based patient biomonitoring platform allows us to register a number of the patient's physiological parameters in a non-intrusive manner. "The information gathered by an intelligent t-shirt using e-textile technology is sent, without using wires, to an information management system, which then shows the patient's location and vital signs in real time", explain the UC3M researchers. The system is designed to be used in hospitals and can be divided into two parts: the fixed infrastructure, which would be pre-installed in the hospital, and the mobile units, which would move with the patients.

The mobile units include an "intelligent t-shirt" and a localization device, which can be carried in a pocket and, which they intend to incorporate into the garment in the future. The t-shirt is washable and includes electrodes that detect bioelectric power through which an electrocardiogram can be obtained. In addition, it has a removable device that includes a thermometer and an accelerometer, which are used to take the patient's temperature, his/her relative position (reclining, standing, etc.) and his/her level of physical activity. Finally, the indoor localization unit is activated periodically, receives signals from the units that make up the fixed localization infrastructure and wirelessly sends that information to the information management system. Once the information is received there, the localization algorithm that has been developed is able to establish the individual's position within a two-meter margin of error, and to mark the spot on a map of the hospital.

The prototype was developed as part of the project "LOBIN: Localización y Biomonitorización a través de Redes Inalámbricas en Entornos Hospitalarios" (Locating and biomonitoring by means of Wireless Networks in Hospitals), funded by the Ministry of Industry, Tourism and Commerce, Plan Avanza I+D (Advance R + D Plan) (TSI-020302-2008-57), and is the result of the collaboration of the national consortium made up of researchers at UC3M and other companies and R+D centers, such as Simave Sistemas, Nlaza Soluciones, Nuubo and the Centro Tecnológico de Telecomunicaciones de Galicia (Gradiant). The wireless communications infrastructure and the communications software for the prototype were designed at UC3M. In addition, the UC3M researchers carried out the phases in which the different technologies developed by the associates were integrated; this integration was later validated in the Cardiology Unit of La Paz Hospital in Madrid. During this validation phase, the system was tested 24 hours a day, with five patients being monitored simultaneously. "Thanks to this experience with the hospital personnel, who were very satisfied with the platform, we found several valuable possible improvements to the system", explain researchers Víctor Custodio, Gregorio López and José Ignacio Moreno, of UC3M's Department of Telematic Engineering.

With slight modifications, the prototype can also be applied in other areas, such as applications involving early diagnosis of cardiac anomalies in athletes, or for telemedicine, to monitor patients in thetheir homes, thus reducing the time they must remain admitted to the hospital. The information management system stores all of the patient's information for possible studies later, such as the analysis of how a particular patient's level of physical activity affects the quality of the electrocardiogram. In addition, the program has a series of alarms, configured by default, which are activated when the measured parameters exceed pre-established limits, such as 38º C body temperature or 100 heartbeats per minute, for example. "All of these alarms can be modified by the doctors in order to adjust them to the specific needs of each patient; whenever any one of these alarms goes off, a message will appear on the screen and, it can also send an SMS alerting the doctor in charge or the proper hospital personnel who, at that moment, is closest to the patient in question", the scientists point out. 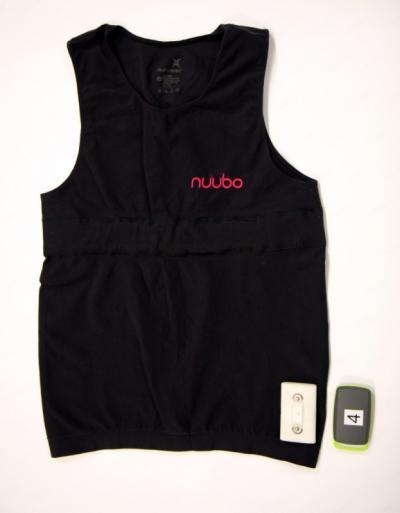 Using this garment-based patient biomonitoring platform allows us to register a number of the patient's physiological parameters in a non-intrusive manner.

The work done and the results obtained as part of this project have been presented in conferences and published in respected, international journals, such the 21st Annual IEEE International Symposium on Personal, Indoor and Mobile Radio Communications (PIMRC 2010) and the IEEE Transactions on Information Technology in Biomedicine, respectively. In this journal, the UC3M researchers published an article in which they describe the system's architecture, its development process, the tests that have been carried out, and the validation results.