Mitochondria are the power stations in living cells, but they also have many other sidelines. The byproducts of their respiration and energy conversion, for instance, include molecules eager to participate in chemical changes. These reactive oxygen species are two-edged swords that can harm the body or protect it. 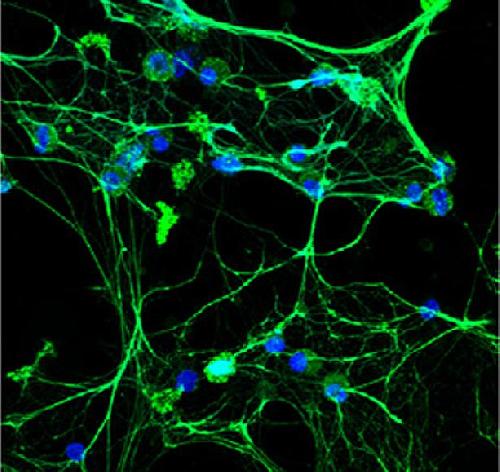 Lupus low-density granulocytes spontaneously undergo NETosis -- a process in which the immune cell throws out genetic material (DNA, blue) and antimicrobial molecules such as elastase (green) in a web-like structure Credit: Elkon Lab/University of Washington

Researchers at the University of Washington and the National Institutes of Health are discovering more about how these chemicals and other mitochondrial materials provoke the body's self-attack in systemic lupus erythematosus.

"Because mitochondria are a potent source of reactive oxygen species, and because mitochondrial DNA has been implicated recently in inflammatory responses," the researchers noted, "we wanted to examine their role in this autoimmune disorder."

Lupus is more common in young women and varies in its constellation of symptoms from patient to patient. Its severity ranges from mild to disabling. In some patients, lupus is life-threatening. Currently no treatment exists to cure it. Periodic flares can affect one or more parts of the body. During a flare, a burning rash, which early doctors thought resembled the scratch of a wolf's paw, often reddens the cheeks. The joints, kidneys, and the sack surrounding the heart can become swollen and painful. If the brain is under autoimmune siege, headaches, seizures or episodes of psychosis can occur.

Neutrophils - the white blood cells that normally capture pathogens - are among the suspects in autoimmune disorders. Germs, as well as damaged cells and immune particles the body manufactures, can goad a neutrophil to create a mesh outside itself in an attempt to ensnare offenders.

Past studies suggest that these traps also could promote the organ damage of lupus. The formation of neutrophil extracellular traps, or NETs, can lead to a type of cell death called NETosis. Either aberrant NETosis or impaired NET clearance likely plays a role in several autoimmune disorders, including lupus. In mouse studies, drugs that inhibit NETosis result in improvements in lupus. These drugs also reduce hardening of the arteries and abnormal clotting.

How these traps are generated, however, and how they provoke inflammation when no infection is present, are both unclear.

These questions, and the contribution of these phenomena to lupus-like disease, are being explored by a research team jointly led by Keith B. Elkon, UW professor of rheumatology, and Mariana J. Kaplan, chief of the Systemic Autoimmunity Branch of the National Institute of Arthritis and Musculoskeletal and Skin Diseases.

Their most recent results appear this week in Nature Medicine.

They report that the RNA-protein immune complexes commonly found in lupus patients induce cell death by NETosis in a process dependent on mitochondrial reactive oxygen species.

In lab studies, the researchers noted, this extracellular release of oxygenated mitochondrial DNA promotes an inflammatory reaction. When this DNA is injected into mice, its unwelcome presence is detected by DNA sensors and leads to activation of a protein called STING. A chemical warning goes off. The resulting type 1 interferon signaling calls up antimicrobial defenses and other immune responses.

In a related study on a mouse model of lupus, the researchers treated the mice with scavengers that clean up the overflow of mitochondrial reactive oxygen species. They found this could reduce type I interferon responses, as well as the severity of the lupus.

This finding is clinically relevant to autoimmune diseases, according to the research report, because various reactive oxygen species inhibitors are currently being tested in clinical settings for other diseases. They could be studied as potential therapeutic agents for systemic autoimmunity.

In the clinical part of the research project, a distinct class of neutrophils - low-density granulocytes - were obtained in blood samples from individuals with systematic lupus erythematosus and people with chronic granulomatous disease. The researchers noted that mitochondrial reactive oxygen species played a necessary role in the spontaneous NETosis cell death of low-density granulocytes. Furthermore, the released NETs contained large amounts of oxidized mitochondrial DNA.

The results, in summary, offer evidence that neutrophil extracellular traps enriched with mitochondrial DNA could help drive lupus-like diseases and could lead to novel therapeutic approaches.