An international team of scientists has for the first time shown that mitochondria, the batteries of the cells, are essential for ageing.

In a study, published today in the EMBO Journal and led by Dr João Passos at Newcastle University, they found that when mitochondria were eliminated from ageing cells they became much more similar to younger cells. This experiment was able for the first time to conclusively prove that mitochondria are major triggers of cell ageing.

This brings scientists a step closer to developing therapies to counteract the ageing of cells, by targeting mitochondria. 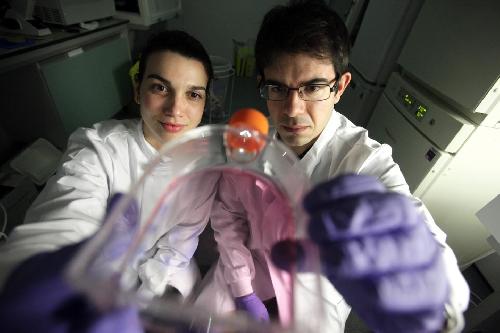 Defying ageing in the cell

As we grow old, cells in our bodies accumulate different types of damage and have increased inflammation, factors which are thought to contribute to the ageing process.

The team carried out a series of genetic experiments involving human cells grown in the laboratory and succeeded in eliminating the majority, if not all, the mitochondria from ageing cells. Cells can normally eliminate mitochondria which are faulty by a process called mitophagy. The scientists were able to "trick" the cells into inducing this process in a grand scale, until all the mitochondria within the cells were physically removed.

To their surprise, they observed that the ageing cells, after losing their mitochondria, showed characteristics similar to younger cells, that is they became rejuvenated. The levels of inflammatory molecules, oxygen free radicals and expression of genes which are among the makers of cellular ageing dropped to the level that would be expected in younger cells.

Dr João Passos of the Institute for Ageing said: "This is a very exciting and surprising discovery. We already had some clues that mitochondria played a role in the ageing of cells, but scientists around the world have struggled to understand exactly how and to what extent these were involved.

"These new findings highlight that mitochondria are actually essential to the ageing of cells."

The team led by Newcastle University and involving other universities in the UK and the US, also deciphered a new mechanism by which mitochondria contribute to ageing. They identified that as cells grow old, mitochondrial biogenesis, the complex process by which mitochondria replicate themselves, is a major driver of cellular ageing.

"This is the first time that a study demonstrates that mitochondria are necessary for cellular ageing," said Dr Clara Correia-Melo of the Newcastle University Institute for Ageing and the lead author of the study. "Now we are a step closer to devising therapies which target mitochondria to counteract the ageing of cells."